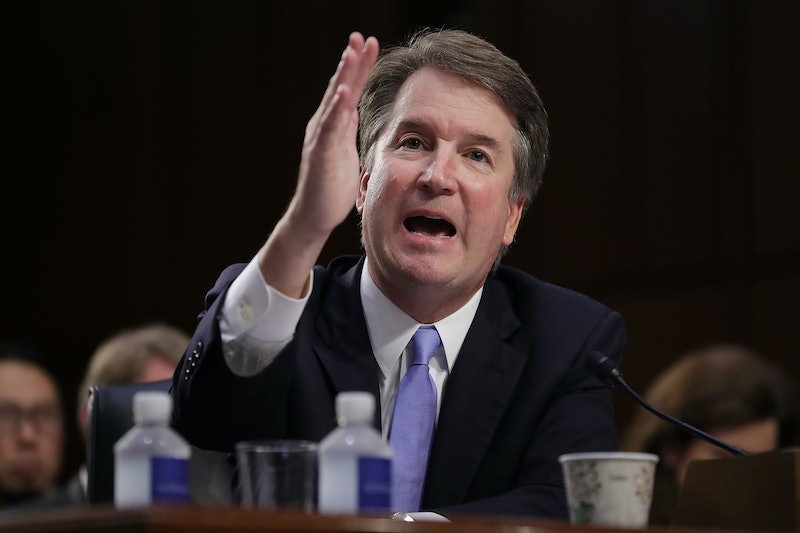 The political storm that Supreme Court justice nominee Brett Kavanaugh is currently trying to pull through has just gotten worse. A second woman claims Kavanaugh tried to assault her, and Senate Democrats are moving quickly to investigate. Kavanaugh has firmly denied the accusation. Bustle has reached out to the White House for comment on the newest allegation.

The woman, Deborah Ramirez, attended Yale with Kavanaugh, and alleges that he exposed himself to her at a party during their freshman year, the 1983-1984 school year. "Kavanaugh had exposed himself at a drunken dormitory party, thrust his penis in her face, and caused her to touch it without her consent as she pushed him away," wrote The New Yorker's Ronan Farrow and Jane Mayer, describing the new allegation.

Kavanaugh flat-out denied the incident, writing in a statement to The New Yorker:

The White House also issued a statement, according to Axios, saying:

Ramirez, like Dr. Christine Blasey Ford, whose sexual misconduct accusation delayed Kavanaugh's confirmation vote, also called for an FBI investigation into the incident, according to The New Yorker. “I would think an F.B.I. investigation would be warranted,” she said to the outlet.

As Ramirez recalls it, per The New Yorker, she was invited to a dorm room party, where students decided to play a drinking game. Ramirez became drunk, according to her account, and as she lay on the floor, slurring her words, a male student exposed himself to her.

“I remember a penis being in front of my face,” Ramirez said to The New Yorker. “I knew that’s not what I wanted, even in that state of mind. ... I was embarrassed and ashamed and humiliated.” Ramirez said she can remember Kavanaugh laughing while he pulled up his pants. “I can still see his face, and his hips coming forward, like when you pull up your pants.”

And she claimed she also recalled others laughing at her expense; another male student apparently announced the incident. “Somebody yelled down the hall, ‘Brett Kavanaugh just put his penis in Debbie’s face,’” Ramirez said to The New Yorker. “It was his full name. I don’t think it was just ‘Brett.’ And I remember hearing and being mortified that this was out there.”

Discussing why she's coming forward with the allegation now, Ramirez asked The New Yorker, “What does it mean, that this person has a role in defining women’s rights in our future?”