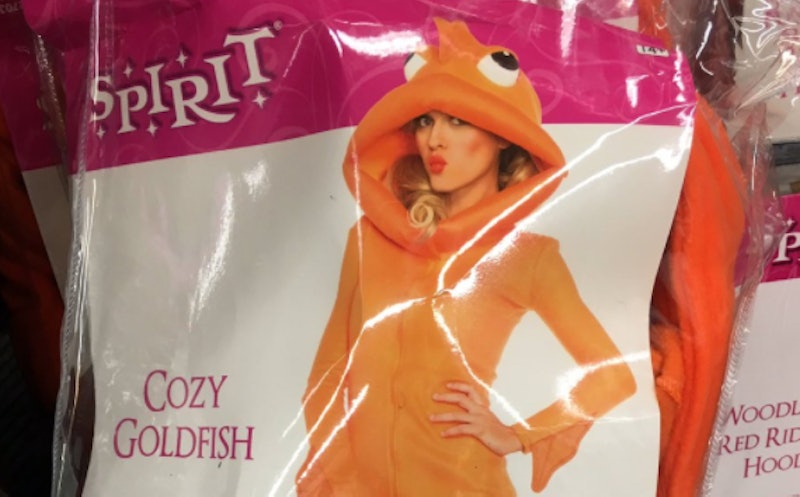 You can always count on a slew of "sexy" costumes to surface once Halloween rolls around. There's the sexy feline costume that always gets overdone. There's villain getups that always receive the sexy treatment. Then there's every occupation from a nurse to a police officer has also gotten sexyified over the years. Well now, the 'Sexy Goldfish' costume is a thing, and Halloween lovers don't know how to handle it.

Flashback to your childhood when you received your first pet — a tiny, big-eyed goldfish. If only you knew then that decades later your adorable pet would become a racy internet sensation. It's proof that marketers may have gone too far this time when something as sweet as a goldfish is getting provocative.

If you want to wear it, wear it. But, you have to admit, it is a little strange.

It's certainly not the first time an otherwise ordinary costume has received a risqué makeover. How about that sexy Pennywise costume that's so spooky and seductive it seems strange? And not too long ago, a sexy Donald Trump costume was a nightmare that should have never saw the light of day. So, it should come as no surprise that the makers of those weird getups are also responsible for the goldfish that's currently breaking the internet.

Leave it to Yandy, an online retailer that has churned out some of the most controversial ensembles, to create the Cozy Goldfish Costume. They've got a knack for putting a very unexpected twist on Halloween getups. And now they brought this orange, fishy, fleece mini dress to life.

Of course, you have to have your swimming aids to be a true goldfish. So there are fin sleeve details and a large tail attached to the hiney. Oversized goldfish lips make for a hood, so you're sure to get a little warmth up top during a chilly Hallow's Eve. Talk about convenient!

There's even an upgraded version of the offbeat costume.

For triple the price— yes, a whopping $165— you could transform yourself with the Deluxe Sexy Goldfish Costume. Featuring a glitzy design, this orange glitter romper includes iridescent peplum sides and a shimmery tail. Never fear, because the hoodie head is still there — this time with shiny details. With that price and that much shimmer, perhaps this is where things have gone much too far.

This is a pretty weird costume choice at the end of the day. With such an oddball design, it's not surprising that the Twitterverse doesn't know how to feel about it.

For some, it's a costume that should have never happened.

Others are appreciating the practicality of it all. Hoods and long sleeves on a "sexy" costume are rare, people, and that kind of genius must be appreciated.

No, really! We. Need. Answers.

You have to admit that it does make for a hilarious couples costume. Dress your beaux as a fisherman and you could be his fish.

You'd think Yandy would be the only ones selling the interesting ensemble, but nope. If you really want to be a sexy goldfish, girlfriend, you've got options.

The costume hasn't just gone viral, it has gone international. Far and wide, sexy goldfish will be making their debut come Halloween.

It's safe to say that there are some pretty mixed emotions when it comes to this flirty goldfish getup. It may be one of the worst costumes to surface, but it very well could be one of the best. After all, some versions of the costume do look extremely comfortable.

Don't be surprised if you spot dozens of goldfish floating around during your night of spooky fun. With the costume getting the viral treatment, it'll likely be a top Halloween choice for that reason alone. Not to mention it becomes strangely cute the more you look at it.

More like this
12 Bellissima Beauty Moments From Milan Fashion Week S/S 2023
By Olivia Rose Ferreiro
Prefer Alcohol-Free Perfumes? Water-Based Fragrances Are On The Rise
By Audrey Noble
Lily Collins Got Shaggy Curtain Bangs For Emily In Paris Season 3
By Audrey Noble
Halsey Debuted A Copper Pixie Haircut, & It's Such A Fall Vibe
By Olivia Rose Ferreiro
Get Even More From Bustle — Sign Up For The Newsletter