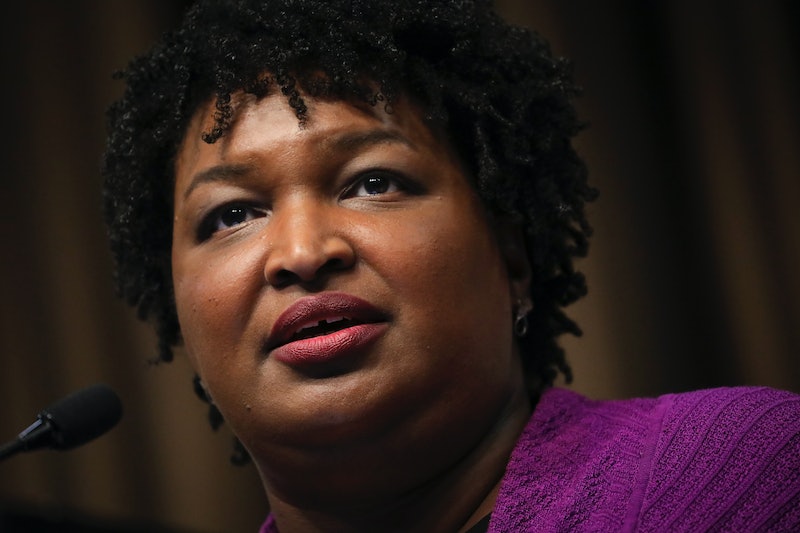 Although her bid for governor of Georgia was ultimately unsuccessful, Stacey Abrams emerged from her campaign as one of the most prominent voices in the Democratic Party. After months of speculation and encouragement from supporters across the board, she finally made an announcement concerning her political future on Tuesday. Stacey Abrams announced she won't run for U.S. Senate in 2020, but she doubled down on her commitment to expanding voting access and getting a Democrat elected to that spot.

“I am so grateful for all of the support and encouragement I have received from fellow Georgians, to leaders of Congress and beyond,” Abrams said in a video posted to social media on Tuesday. “However the fights to be waged require a deep commitment to the job, and I do not see the U.S. Senate as the best role for me in this battle for our nation’s future.”

Prominent Democrats, including Senate Minority Leader Chuck Schumer, had encouraged Abrams to run for Senate, according to Politico. As CNN wrote, though, Abrams decided that she would keep her focus on her efforts to expand voting rights rather than running for the Senate seat. Her announcement, however, leaves open questions about a 2020 presidential run.

Previously, Abrams indicated that she wouldn't run for president in 2020, but she did suggest that she's open to all possibilities, according to CBS News. However, CNBC noted that her announcement about a potential 2020 Senate run made no mention of any plans to run for the White House, either now or in the future. This, of course, leaves open the chance that she's still considering a run for the nation's highest office, or that she's open to accepting a vice presidential nomination from the eventual Democratic candidate, as CNBC wrote.

Abrams and her team pushed back against reports that 2020 Democratic presidential candidate Joe Biden had discussed tapping her as his running mate early on, which Axios originally reported in March. Both Biden's and Abrams' teams disputed those reports, according to BuzzFeed News. However, Abrams did also respond to the suggestion in another way.

Her announcement on Tuesday, however, left out any mention of her 2020 plans besides the decision not to run for Senate, and instead focused on her efforts to expand voting rights and her promise to fight for whoever Georgia's Democratic nominee for Senate ends up being.

"While I still don't know exactly what's next for me, here's what I do know," Abrams said in the video. "Democracy in America is under attack. Voter suppression is rampant and it is real ... bad policies are a direct result of people's voices not being heard, because their votes were not counted."

So, while it remains unclear what exactly Abrams will be doing in the run up to the 2020 election, it's pretty clear that her voice is going to be a loud one.