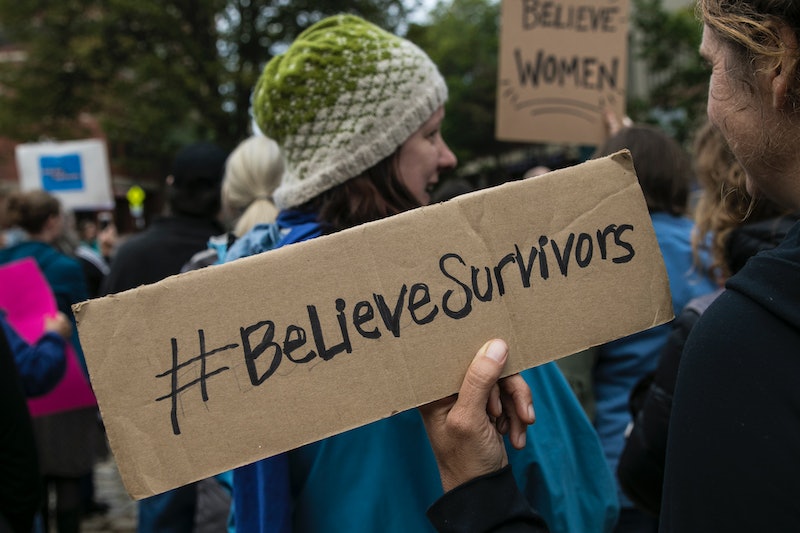 Sexual violence in conflict zones is a deeply troubling human rights violation, which the United Nations (UN) has attempted to address time and again. On Monday, America threatened to veto a UN resolution on rape in war zones, citing apparent issues with the text mentioning "sexual and reproductive health," according to a senior UN official and European diplomats who spoke with The Guardian.

The outlet noted that the drafted resolution on rape in combat zones had reportedly already lost a key element: the creation of an official monitoring agency that survivors of sexual abuse could turn to for help. As it stands, the draft implores UN entities and donors to work on making "sexual and reproductive health" services accessible to survivors of sexual violence in war zones. Bustle has contacted the White House for comment on the report.

Pramila Patten, who is the United Nations' special representative on sexual violence in combat zones, told The Guardian that America's opposition to the language in the resolution had created uncertainty in the UN. "We are not even sure whether we are having the resolution tomorrow, because of the threats of a veto from the United States," Patten said to the outlet. A spokesperson for the American mission told The Guardian that it "does not comment on draft resolutions that are under active negotiation."

According to The Guardian, the American mission reportedly opposed the mentioning of "sexual and reproductive health" because it could imply a pro-abortion stance. Additionally, the outlet noted that the United States supposedly pushed against the use of "gender" in the draft.

Over time, the UN has released comprehensive reports on sexual violence in conflict zones with the objective to ideally end the scourge of such a human rights violation. In 2017, UN Secretary General António Guterres released a report on sexual violence in turbulent combat zones and urged states to carry out comprehensive legal, social, medical, and communal initiatives to combat the problem.

The 2017 report mentions countries like Syria, Iraq, Afghanistan, Colombia, the Democratic Republic of the Congo, Libya, Myanmar, Somalia, South Sudan, Yemen, Bosnia, and Herzegovina, among other places. It strongly supports the implementation of health care programs that would address the various traumas of sexual violence.

Similar to the resolution that The Guardian mentioned in its report, the 2017 study notes that countries should address discrepancies in "sexual and reproductive health care in conflict-affected settings" as they are "life-saving interventions."

A watered-down version of the UN resolution on rape in war zones could backfire. Without such specific wording in the draft, Patten told The Guardian that it could create confusion for those attempting to understand and tackle the issue.

For now, the UN is keeping the terms in its draft. Patten said that words were being "maintained" and the situation would reveal more on Tuesday.