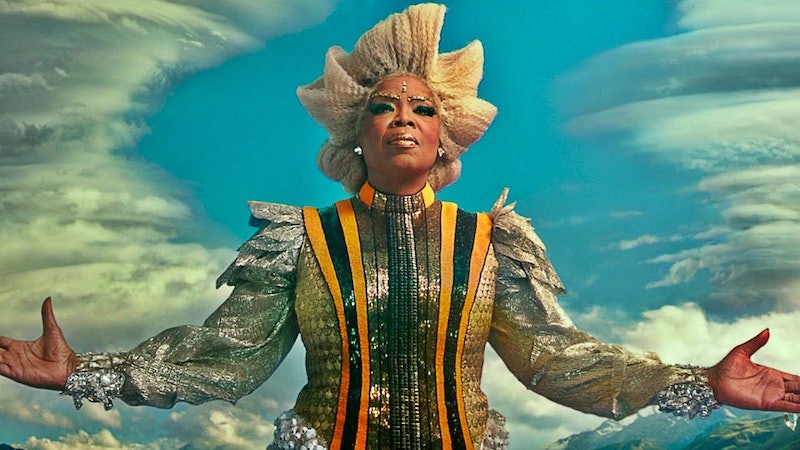 It is a truth universally acknowledged that if Oprah Winfrey offers you a piece of advice, you pay close attention. And that's exactly what Storm Reid, the teenage star of the upcoming A Wrinkle in Time adaptation (out March 9), did on set of the film. As the 14-year-old learned first hand, it makes no sense to worry about things you can't control — at least, according to Oprah.

On set of the movie in February of 2017, Reid explains to a handful of reporters just how nervous she was — and can you blame her? — to meet the storied actor/producer/host when they were both cast in A Wrinkle in Time. After all, Oprah is, well, Oprah, even if "the regular, powerful, beautiful black woman," as Reid describes her, is actually pretty "down to earth." The teen quickly got over her nerves, though, and the pair became so close that Reid gauged her new friend for some friendly advice.

"I have a fear that I’m gonna be really tall," Reid admits, before recalling Oprah's simple words of wisdom when she shared this concern: "'You can’t put energy into trying to resist something in life. You have to put that energy into something else, ‘cause God has planned for you what he’s planned for you, and you can’t change that. You’re just wasting energy, trying to resist something.' That was really good advice."

Though Reid's fear is, of course, specific to her, the advice bestowed by Oprah can be applied to countless other worrisome situations. Because, let's face it: It's easy to stress about a million and one things in life, from physical appearances to anxieties at work, but some things will always be out of our control. In this way, Oprah's advice is pragmatic: Focus on the things you can change. Give energy to situations and problems that can benefit from your attention, and let the other stuff go.

Oddly, or perhaps serendipitously, Oprah's character in A Wrinkle in Time, Mrs. Which, is also a great provider of wisdom. On the movie's set, Oprah recalls a scene in which she advises Storm's character, Meg, as she's trying to overcome a challenge on the quest to find her father. "She says to Meg, 'The reason why you can’t accomplish what you want is because you’re resisting too much.' She actually says those words," Oprah explains.

To the seasoned actor, this advice can be applied to "everybody in life," regardless of age or particular hardship. "You don’t get what you want when you’re in resistance against it, so you have to be calm," Oprah says. "You have to be at ease. You have to believe that you can, and then you move forward."

And move forward is exactly what Reid did, giving less energy to her concern of growing too tall, and more energy into her Wrinkle in Time performance — and inspiring others in the process.

"I hope it just inspires girls my age, little girls, women of color, different races, and any gender," she says with clear confidence. "I just want people to believe in themselves and know that they can do anything, and that nobody can tell you that you can’t do something. Nothing is impossible. In the word impossible, it says I’m possible. Just always know that. No matter what gender or race you are, or whoever you love, you can always do it. Don’t let anybody tell you differently."

Though she and Oprah are years apart, Reid clearly has plenty of advice worth paying attention to, as well. So, to summarize: Don't give energy to things you can't control. And, don't anybody tell you you can't do something. OK? OK. Class dismissed.

More like this
At 28, Rosie Perez Risked Her Career To Stop Playing Stereotypes
By Gabrielle Bondi
Storm Reid Is A Morning Routine Girlie
By Carolyn Steber
Keyla Monterroso Mejia Is Finally The Star Of The Show
By Gabrielle Bondi
At 28, Debra Jo Rupp Was Living A Much Different '70s Show
By Grace Wehniainen
Get Even More From Bustle — Sign Up For The Newsletter
From hair trends to relationship advice, our daily newsletter has everything you need to sound like a person who’s on TikTok, even if you aren’t.