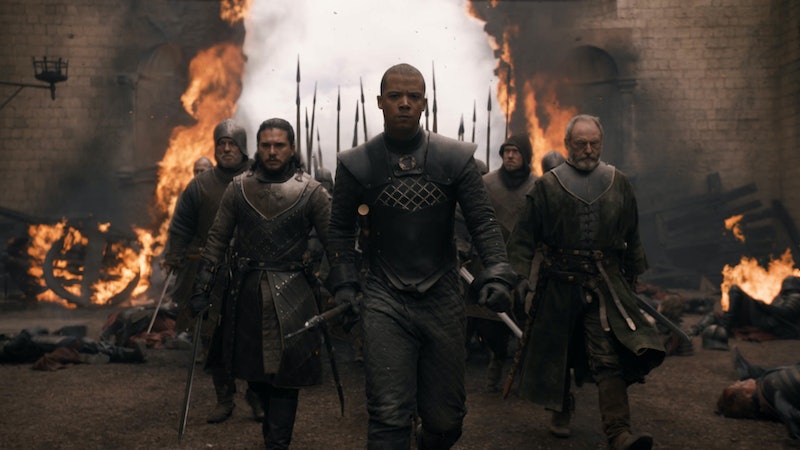 As the quarterback of the Green Bay Packers, he's no stranger to taking a knee. In last night's episode of Game of Thrones, however, bend the knee he most certainly did not. According to a recent report from People, Aaron Rodgers had a cameo on Game of Thrones, where he appeared as a soldier for the Golden Company army. It was definitely a blink-and-you'll-miss it kind of moment, so there's a good chance that you did, in fact, blink and miss him. At least you can go back and catch him in it now though, right?

Apparently, Rodgers has been hinting at his cameo for months. He clearly couldn't and/or didn't want to ruin the surprise for fans — he's a fan of the show himself, so he likely knows the sting of an unwanted spoiler — so he's only vaguely alluded to it. But in retrospect, everything he's said makes a lot more sense now.

During the fifth and penultimate episode of GoT's final season, Cersei Lannister's Golden Company army lined up for battle against Daenerys Targaryen’s army at King's Landing. Among those clad in red and armed with bows and arrows was Rodgers — looking stern and ready to fight for Lannister's bid at the throne (as pointed out below in a screenshot from Twitter user @PatMcAfeeShow).

If you're over there squinting and trying to decide if that's *actually* Rodgers in the shot above, fear not — the quarterback confirmed the cameo himself via an Instagram post after the show. "It was just for a few seconds, but I’ll always be thankful to have been on the penultimate episode of @gameofthrones," he wrote, followed by "#crazyepisodetonight" and a hashtag with four fire emojis.

One of the first times Rodgers may have dropped a hint about his would-be, split-second appearance on GoT was way back in December 2018, People reported. In a short promo clip for the upcoming season, the athlete sat on the Iron Throne and jokingly announced, "I’m Lord Aaron of House Rogers of Greenwater Bay, the true King of the North."

He went on to tout the legacy of his championship-winning football team, and then admitted, "Over the years I’ve tweeted out or said on various shows some of my theories about the Game of Thrones plot twists, and they’re usually wrong. There's only one game that really matters ... Game of Thrones."

On April 21, after the first of the final six episodes aired, Rodgers tweeted, "24 hour rule still applies folks, for all those who thought there were better things to do tonight than watch @GameOfThrones," followed by "#iwaswatching #4moreepisodes #episode5shouldbegood."

What was Rodgers' characters' fate, though, you wonder? Well, the 24-hour rule still applies, folks, so you'll have to watch and see.

More like this
Alicent's Green Dress In 'House Of The Dragon' May Be An Act Of War
By Kadin Burnett
Nicola Coughlan Shared A Lady Whistledown Excerpt From ‘Bridgerton’ Season 3
By Grace Wehniainen, Alyssa Lapid and Sam Ramsden
The 'Andor' Timeline, Explained
By Gretchen Smail
This Episode 6 Moment Foreshadows Viserys' Fate On 'House Of The Dragon'
By Grace Wehniainen
Get Even More From Bustle — Sign Up For The Newsletter