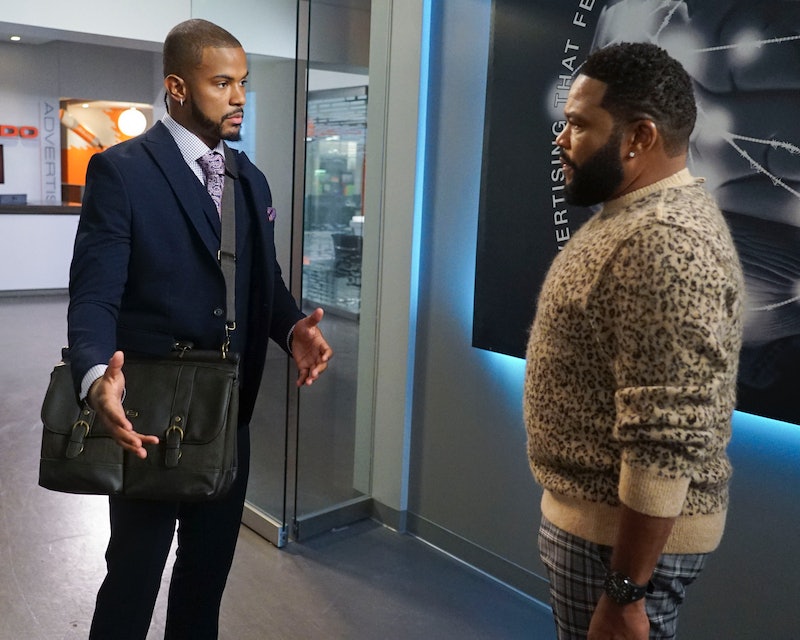 The Feb. 20 episode of Freeform's grown-ish was titled "Real Life Sh**t" for a reason. As graduation — and some hefty loan payments — await Aaron, his student debt struggle on grown-ish became more than just a storyline. The reality is that Americans owe $1.6 trillion in student debt, per the Federal Reserve, and the price tag on higher education is financially crippling a generation. What's more, people of color remain those most negatively affected. As Zoey stated in voiceover during the episode, for some people, higher education only creates more space between them and their goals. "And let's be honest, those "some people" are Black people," she says.

Take, for instance, the statistic grown-ish threw out at the top of the episode: By age 30, the average white male college graduate will have paid off 44% of their student college debt. The average Black male will owe 11% more than when they graduated. MarketWatch reported the same figures in Aug. 2019 (via an analysis by think tank, Demos), adding that, 12 years after leaving school, Black women's loan balances actually grow 13% on average.

Later, in a group discussion, Doug dropped some experiential knowledge about how lenders prey upon "black kids who want to go to college but can't afford it." He explained how the banks know they have no other option and hand over "this easy money wrapped in a free t-shirt." And by the time you graduate, he said, you realize that you owe them twice the money plus the shirt off your back.

When Aaron hit a CalU career fair, more of the reasons behind those disparities became painfully evident. Although Doug was sure that prospective employers would be begging for him to be their "one non-threatening black person" diversity hire, what he actually faced, in Zoey's words, was "one corporate Caucasian complication after another." The one moment of promise came when two reps from Zoey's dad Dre's company told him they were looking to "bolster their urban division."

Although "fellow person of color" Ana argued there's something to be said for more minorities going to college than ever before, Jazz countered that the cost and benefit of their education is not equal. Her point was that if they all were to graduate with the exact same degree, experience, and had all "slayed the same interview," employers would be most likely to first offer the job to Nomi, then to Doug and Aaron, while she, Zoey, and Sky "would come in dead last."

With the roadblocks of discriminatory hiring practices taken out of the equation, Aaron estimated that he was looking at $750/month payments on his six-figure student loans. Even if he got a great job, he said, it would still take him at least 30 years to pay them off. And, even that, would require a "strict bologna and cup of noodles diet" for the rest of his life.

So the icing on the potential job at Dre's company was their student loan forgiveness program. Even positions similar to those are currently in jeopardy, however. In his new proposed budget, Trump outlined $5.6 billion in funding cuts to the U.S. Education Department, also eliminating the Public Service Loan Forgiveness program created by George W. Bush in 2007, per Forbes. Not surprisingly, several of the top 2020 Democratic presidential candidates have made the issue a central part of their platforms.

The program at Dre's company became a moot point, at least temporarily, thanks to Zoey dropping the ball. Aaron did, however, end up getting perhaps the next best thing — depending on how you look at it. Thanks to a call from Dre, Charlie offered Aaron an on-campus job as his personal assistant. Sure, it paid minimum wage, and the only health insurance option was a bottle of aspirin, but the CalU dean revealed the college offers free grad school for its staff.

As Zoey summarized: "The reality was that Aaron couldn't erase the debt he had already acquired, but this bizarre job and the offer of free grad school would give him a financial head start to ensure he wouldn't become just another statistic."

More like this
What’s New On Netflix: Ana De Armas’ 'Blonde' & A Nick Kroll Special
By Arya Roshanian
'Elite' Season 6 Is Arriving Sooner Than You Think
By Gretchen Smail and Grace Wehniainen
The 'Reasonable Doubt' Cast Includes A 'Save The Last Dance' Reunion
By Grace Wehniainen
Nicola Coughlan Shared A Lady Whistledown Excerpt From ‘Bridgerton’ Season 3
By Grace Wehniainen, Alyssa Lapid and Sam Ramsden
Get Even More From Bustle — Sign Up For The Newsletter