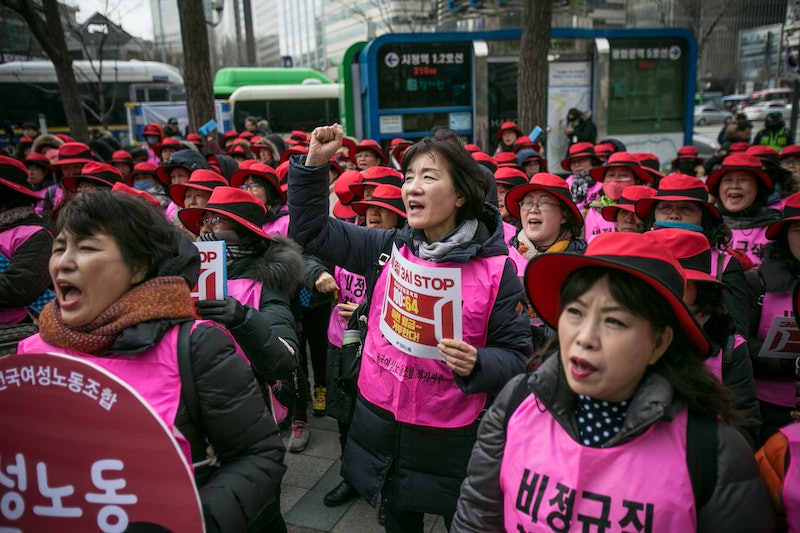 Abortion has been banned in South Korea for more than six decades, but that's now poised to change. The country's Constitutional Court said on Thursday that South Korea must lift its abortion ban, ordering the nation's parliament to change the law by the end of 2020. Court officials said the ruling cannot be appealed, the Associated Press reports.

“The abortion ban limits women’s rights to pursue their own destinies, and violates their rights to health by limiting their access to safe and timely procedures,” the court said in a statement, per The Guardian. “Embryos completely depend on the mother’s body for their survival and development, so it cannot be concluded that they are separate, independent living beings entitled to the right to life.”

Under the current law, South Korean women who have an abortion could face up to a year in prison and a fine of up to two million won (about $1,780), according to CNN. Doctors who help terminate a pregnancy face up to two years behind bars, though prosecutions aren't common.

After the law change, abortion will only be legal up to the 20th week of pregnancy, per CNN. But women’s rights activists celebrated the legal victory outside the court on Thursday.

"Today’s ruling is a major step forward for the human rights of women and girls in South Korea," Roseann Rife, Amnesty International’s East Asia research director, said in a Thursday press release. "The country’s draconian laws have resulted in discrimination and stigmatization for generations of women and girls by forcing them to undergo clandestine and unsafe abortions."

She urged the government to update the law quickly "so that the health of women, girls and others who can become pregnant is no longer put at risk for fear they or the medical professionals that help them could be punished."

A survey published by the Korea Institute for Health and Social Affairs earlier this year found that 75 percent of women between the ages of 15 and 44 thought the law punishing women and doctors for abortions should be amended, South Korea's Hankyoreh newspaper reports. One in five women who had been pregnant in the past reported terminating a pregnancy, and the researchers estimated that about 50,000 abortion procedures were performed in South Korea in 2017.

“Since it’s illegal at the moment to terminate a pregnancy with medications such as Mifegyne, there is a risk of [women] harming their own health by illicitly using unverified medications or failing to receive instruction on the proper dosage,” Yoon Jeong-won, women’s committee director for the Association of Physicians for Humanism, told Hankyoreh.

Some of the conservative and religious groups that rallied against efforts to lift the ban have links to U.S. anti-abortion campaigns, according to CNN. While the South Korean court ruled in favor of reproductive rights this week, American lawmakers have been introducing anti-abortion bills at an alarming rate so far in 2019. Abortion rights advocates say anti-abortion activists and politicians have been energized by the current make up of the Supreme Court.