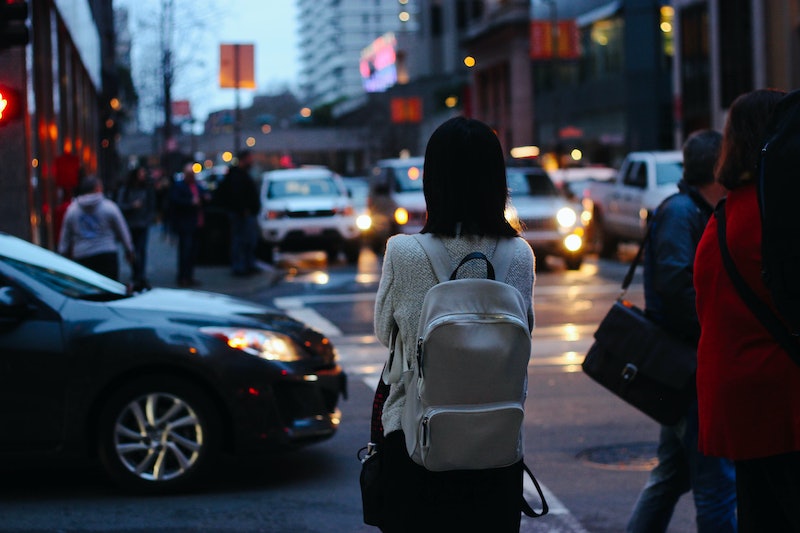 When women complain about street harassment and catcalling, they’re often told, “Just ignore it.” But what about the times that ignoring the catcallers just makes it worse? This scary story from a redditor about being harassed while driving shows that, sometimes, there is nothing that a woman can do to stop unwanted attention. Confront it, ignore it — either way, it’s going to be upsetting and potentially frightening. That’s why it’s important to stop telling women that they should avoid harassment (as if it’s their job to control what others do), and instead focus on the real problem: the people who think that they are entitled to female attention — even from random women who just happen to be driving their cars out in public.

On Friday morning, a redditor who goes by “Shortacts” posted a lengthy account of what happened to her while driving in Los Angeles. “Pulled up to a light. Had my radio on and the windows down. Chillin, just doing my own thing,” she wrote. She added that, because she is “racially ambiguous-looking,” she’s “unfortunately been on the receiving end of what [she calls] the ‘Magic 8 Ball’ of multilingual street harassment of both the racial and seal varieties.” In this instance, the street harassment was particularly extreme.

“So this dude at the light starts off with his petty driveby street harassment through my passenger window,” she recounted. “Not wanting to get into a confrontation or acknowledge him, I remain stoic — I don't look over, I don't turn up my radio, I just pretend it's the wind.” But ignoring the guy only seemed to spur him on. She wrote:

It became obvious he wasn't taking kindly to being ignored by a random woman at a stoplight. He just got louder AND ANGRY. He unloads a barrage of crazy and looks to be unbuckling his seat belt, presumably to exit the car for this perceived INSULT of not acknowledging this f--king douchewad. I see the driver side door crack open and a foot step out. Not good for me.

Shortacts said that she rolled up her windows and decided to try another tactic:

It's afternoon rush hour daylight. I figure, if I'm about to be attacked, I may as well be as visible as is humanly possible, because really, what are my other options? So I just start flashing my brights, honking my horn, and seeing a squad car a few cars deep in another direction, I just make a giant f--king scene.

Shortacts claimed that the guy then proceeded to return to his car, retrieve a cup of what would turn out to be antifreeze, and then throw it on her windshield. (Remember, all this for the crime of refusing to respond to complete stranger’s demands for attention.)

She said the guy then began following her in his car, even making an illegal turn to do so. Eventually, she saw some police cars and pulled up behind them. “I rolled down the window and yelled to one of the cops that some guy was chasing me by car, gave a description, and asked if I could just park my car near their cars for a minute until he moved on,” she wrote. “So that's what I did. And that was just fine, I went home after a few minutes.”

Fortunately, Shortacts came out of this experience unscathed, but the fact that this situation happened at all — and the fact that women go through stuff like this all the time (though it’s usually not quite so extreme) — is mind-boggling. “All of this happened because of some dude with thin skin felt ignored by someone with a vagina. Which is alarming, on so many levels,” Shortacts wrote.

“Alarming” is one way to put it. “Completely terrifying” is another.

More like this
Black Women's Equal Pay Day Highlights An Upsetting Problem
By Brandi Neal
Chris Kaba's Family Continue Fight For Justice After Viewing Police Bodycam Footage
By Sophie McEvoy
Women Around The World Are Cutting Their Hair In Solidarity With Mahsa Amini
By Darshita Goyal
Here’s Your Daily Horoscope For September 29, 2022
By Mecca Woods
Get Even More From Bustle — Sign Up For The Newsletter