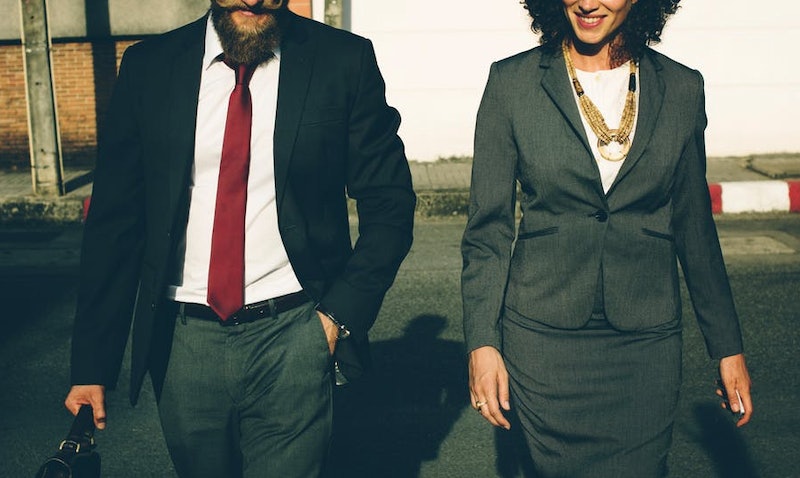 On this week's episode of Ridiculous Things That Happen In The Workplace Despite It Being 2017, a woman posted about how her male coworker period-shamed her, and then HR proceeded to take his side. User "Snuffalo" on mumsnet, a popular website and chat room for parents, recounted the story in a now-viral post titled "Am I being unreasonable to be furious for being called out for menstruating at work?" (Spoiler alert: She is not.)

In the post, she talks about how her "kind-of-supervisor," whom she calls "Guy" for the purposes of anonymity, approached her desk when she was using a hot water bottle to ease period cramps so bad that pain medication wasn't working on its own. When he remarked that there was no way she could be cold that day, she told him it was actually for pain relief. According to the original poster, "He look[ed] confused and then literally horrified and then he walk[ed] away."

The post goes on to detail how "Guy" contacted human resources, which responded in the most tone-deaf, inappropriate way imaginable:

"Less than ten minutes later, I get a Slack message from one of the HR admins (HR is based in another office a few hours away) to say 'Guy says you’re not well and should go home, everything OK?'

"I say 'I’m fine, this is sort of weird, he just looked a bit shocked that I had a hot water bottle, I’ve got cramps, you know how it is.' She goes silent and then offline completely, ten more minutes later, the HR Director calls me and asks me if I can find a meeting room, which I do. She then tells me that I shouldn’t disclose my medical problems to anyone who isn’t part of HR as it can make them uncomfortable. I’m literally shocked, I explain exactly what happened, she says 'yes I understand, if you’re so unwell you need a hot water bottle you should be home, Guy is extremely uncomfortable and it’s unprofessional'. I say 'this is weird, ok, anything else'? She’s quite breezy and professional — 'No, that’s all, if you’re feeling better that’s great but if you need to, please do go home, OK bye!'"

Sorry, did you think that was the worst of it? Because the user provided more context that made it even worse. Not that anyone should ever be excused for blatant period-shaming in any environment, but not only was "Guy" guilty of it, but he also apparently disclosed his own medical conditions in ways that are arguably far more "uncomfortable and unprofessional," and actually do warrant a person going home:

"Guy has been known to take meetings with clients whilst laying flat on the floor on his back because of back problems — which seems to me both unprofessional and likely to make people uncomfortable, not that I really cared personally. I wouldn’t have had my hot water bottle in a client meeting or even if clients were in the office.

Other people have standing desks, weird foot rests, all kinds of chairs and special backrests for their back pain and wrist braces for their wrist pain and a hundred other things and I’m not allowed to have a hot water bottle for my menstrual cramps? Am I right to be completely f*cking furious?"

In a word: Yes. In far more words, not only yes, but "Guy's" behavior crosses the line on an alarming number of levels. Not only did he pry into personal business in the first place, which is just rude on a human level, but he committed what is arguably workplace discrimination. But more than that, he is contributing to a culture of period-shaming that affects women in all kinds of sneaky, confidence-draining ways, particularly in office settings. For a place women spend 40 hours (or more) a week, offices are still remarkably taboo places for women with periods, from the lack of supplies (which would cost a mere $4.87 per year per woman to provide) to the discouragement from talking about them (68 percent of women say they are uncomfortable talking to men at work about periods, while 5 percent say they are even nervous to take their purses to the bathroom, for fear that coworkers will know they're on their periods).

I mean, all that aside, "Guy" just sounds far too immature to be working in an office setting with adults at all if period talk stills his manly heart, but considering the bonkers nature of this story, that was already a given.

So what should you do if, menstruation gods forbid, you get into a situation like this? First off, make sure to document everything that happened — the conversation that took place, how HR handled it, and what, if anything, was said in the aftermath. Set up a discussion with HR about standard procedure in the handling of incidents like this, armed with the knowledge that this is uncalled for and inappropriate in a work setting. If need be, escalate it by filing a complaint outside of the company. As much as we don't deserve the burden of fixing it ourselves, the sooner we end this culture of period-shaming, the sooner we'll live in a world where we don't have to endure "Guy" and all of his friends derailing our work days, compromising our professional reputations, and generally being gross.