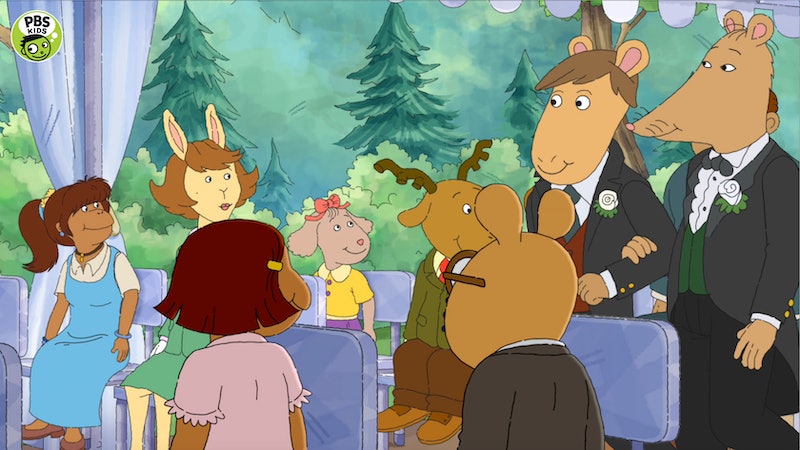 Alabama decided to censor Arthur, the lovable aardvark. Deeming the long-running PBS Kids series' Season 22 premiere too controversial, Alabama Public Television refused to air Arthur on May 13 because of a same-sex wedding storyline, and APT reps are now defending their decision. In this particular episode, titled “Mr. Ratburn and the Special Someone," a beloved third grade teacher, Mr. Ratburn, marries a chocolatier named Patrick, with students Arthur, Francine, Buster, and Muffy all in attendance.

In a statement to NBC News, APT's director of programming, Mike McKenzie, noted that PBS sent stations a message in mid-April alerting them "to possible viewer concerns about the content of the program." He said that, after viewing the episode, he and other APT employees decided not to broadcast it — and, further, has no plans to air "Mr. Ratburn and the Special Someone" at any point in the future.

“Parents have trusted Alabama Public Television for more than 50 years to provide children’s programs that entertain, educate and inspire,” McKenzie said in his statement via NBC News. “More importantly — although we strongly encourage parents to watch television with their children and talk about what they have learned afterwards — parents trust that their children can watch APT without their supervision. We also know that children who are younger than the ‘target’ audience for 'Arthur' also watch the program ... We felt it would be a violation of trust to broadcast the episode."

For reference, national research organization, Child Trends, notes that Arthur "is an educational television program for children aged four to eight that intends to promote reading, problem-solving, being a good friend, connecting to family, appreciating diversity, and having fun."

According to TVLine, this installment of the classic cartoon kicks off when Arthur and his pals discover that their teacher is engaged and become fearful he'll marry a "super uptight" woman (voiced by guest star Jane Lynch) with whom they spot him having lunch. Only wanting their teacher to be happy, they show up at Mr. Ratburn's wedding to prevent him from entering into what they imagine will be an unpleasant marriage. As it turns out, however, the stranger they saw is actually his sister, and "when they see who Mr. Ratburn is actually marrying — not to mention how happy the couple appears — they decide not to sabotage their teacher’s big day, after all." (They do, however, adorably make fun of his dancing.)

Leading up to the episode's premiere, many praised Arthur's groundbreaking efforts on social media. When May 13 rolled around, children across America tuned in to see Mr. Ratburn's historic walk down the aisle — everywhere except in Alabama, that is. Instead, APT opted to preempt the episode, showing an Arthur re-run in its place.

Per NBC News, McKenzie also stated that "if APT had aired the episode, the station would have taken away the choice of parents who felt it was inappropriate for their children."

Others, like Birmingham resident and APT donor Amanda Grooms, counter that the station, instead, took away the choice of parents who "believe kids in Alabama deserve to see programming that's inclusive and affirming."

As Grooms, who relocated from New York City to Alabama to raise her two young children, adds to Bustle: "I'm highly disappointed in APT for assuming families here wouldn't want their children exposed to love in all its forms — including a gay wedding." (She also notes that she and her family will no longer provide financial support to APT.)

Another Alabama mother, substitute teacher Misty Souder, told AL.com that, upon seeing social media celebration over the inclusive episode, she recorded “Mr. Ratburn and the Special Someone” to watch with her daughter — only to discover a rerun (with the same episode title) on her DVR. After Souder reached out to APT, she used the situation as a an opportunity to teach her 9 year old a lesson in speaking out on behalf of marginalized groups.

“I just want her to be aware,” Souder shared with AL.com. “There’s too much going on not to stand up for stuff, even if it’s Arthur. I never thought I’d be going to battle for a gay rat wedding, but here we are.”

According to the website, APT previously pulled a 2005 episode of Arthur, in which a bunny character named Buster visited a girl who had two mothers.

“Our feeling is that we basically have a trust with parents about our programming," APT's then-executive director, Allan Pizzato, told the publication at the time. "This program doesn't fit into that.''

While APT didn't give Alabama parents the opportunity to decide for themselves in either instance, everyone — regardless of where they live — can still watch the full “Mr. Ratburn and the Special Someone” episode here.

More like this
There’s A Brand New Drag Race Spin-Off & It’s Dropping Very Soon
By Sam Ramsden
An Honest Review of MeUndies Boxers, According To A Non-Binary Person
By Megan Lasher
The 'Bachelor In Paradise' Schedule Shifts To 4 Hours Every Week After The Season 8 Premiere
By Brad Witter
The 'Heartstopper' Cast Were Spotted Filming In A Major City
By Nola Ojomu and Sam Ramsden
Get Even More From Bustle — Sign Up For The Newsletter