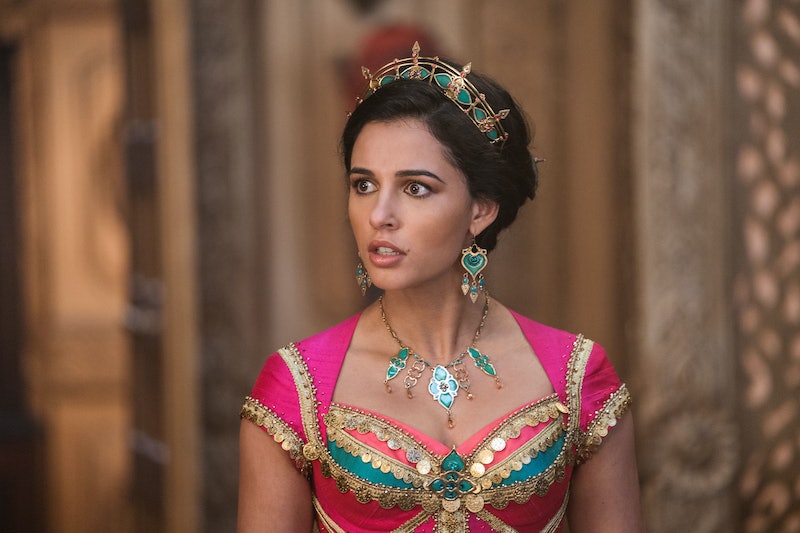 Spoilers ahead! As Disney remakes animated classics for our current climate, some changes have to be made. Maleficent gives the tale of Sleeping Beauty a feminist twist, while Beauty and the Beast turns Belle into an inventor herself, much like her father. More recently, this year's Dumbo omitted the racist caricatures of the original. The biggest change that the new Aladdin makes to its source material is the further development of Princess Jasmine, played here by Naomi Scott. The princess in the 1992 animated original is already clever, independent, and intent on having agency, but the live-action film takes her character a bit further, giving Jasmine political ambitions and by cutting one particular scene that features overt sexualization.

As you probably remember, the scene in question comes during the climax of the original movie. Jafar has stolen the lamp and used his second wish to become a powerful sorcerer. He tells Genie that he wants to use his final wish to make Jasmine fall "desperately in love" with him. Genie tries to explain that he can't make people fall in love, but Jasmine notices Aladdin sneaking in to steal back the lamp, and decides to play along. She adopts a seductive pose and a smooth voice, flattering Jafar to the point that he calls her "pussycat." Eventually, she kisses him. Considering that Jasmine is supposed to be 16-years-old, the scene can only be described as cringe-worthy. Though her ploy worked, her outspoken nature is erased in that moment in favor of her womanly wiles.

Thankfully, the new Aladdin completely omits the entire fake seduction storyline. Though Jafar (Marwan Kenzari) does wish to become sultan and proposes marriage to Jasmine, she never expresses any other emotion except pure hatred for the man who's stealing her country and hurting her father (Navid Negahban). Instead of attempting to seduce Jafar, Jasmine gives a rousing speech to the guards of Agrabah, including Hakim (Numan Acar), their leader, imploring them to serve the rightful sultan instead of a scheming traitor.

The speech is what finally knocks some sense into her father and proves to him that Jasmine is a worthy politician who would make for a good sultan. Throughout the film, her expertise in international relations and leadership ability are evident, but her father still reiterates that a woman can't be sultan. Yet, Jasmine persists. She goes to the marketplace in disguise not because she wants to run away, but because she wants to learn more about her people, from whom she's been isolated for many years. She studies maps and documents to learn more about being a ruler. Even if she can't be sultan, her one goal is to not be silenced.

So when Jasmine is finally able to use her knowledge, influence, and public speaking ability to inspire the guards to remain loyal to their sultan, her potential for leadership is allowed to flourish. And instead of changing the law so that Jasmine can marry Aladdin at the end of the film, her father changes the law so that Jasmine can become sultan herself. From a 2019 vantage point, it's a relief and an inspiration to see a woman who has been doubted and questioned her entire life finally be able to rule. Hopefully, Jasmine becoming sultan is an invocation, and we'll soon see our first president who's not a man.

None of this takes away from the original Jasmine — strident and vocal, brave and resourceful, desirous of her freedom. The seduction scene doesn't undo all of that, but it does put a damper on the otherwise enjoyable original movie. Without it, our new Jasmine is free to embrace her political destiny.