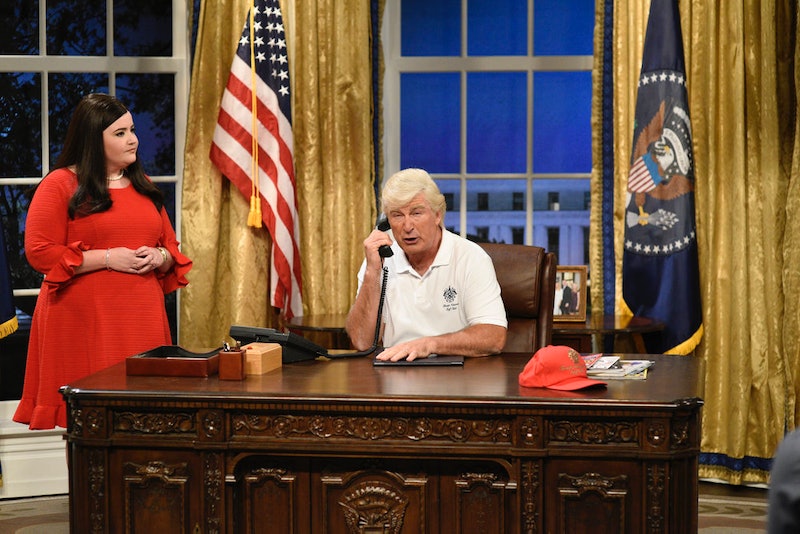 These days, imagining a Saturday Night Live episode without Alec Baldwin's accurate impression of Donald Trump is impossible. While it may be hilarious to watch, Baldwin voiced some concern that playing Trump on SNL isn't making the state of American politics any better. It's clear that Baldwin and the SNL cast are mocking the Trump administration, but what if by mocking them, the show is inadvertently normalizing the absurdity? Is Baldwin helping or hurting America with his Trump impersonations?

In a very candid conversation with former presidential candidate Bernie Sanders on his WNYC Studios podcast Here's The Thing, Baldwin admitted that impersonating Trump hasn't been his favorite thing to do. He posed this question to his esteemed guest:

"Do you think this kind of mockery is not helping? In terms of Trump, do you think we're kind of making him a little too cuddly, and too funny? And we're taking people's minds off something really more serious?"

Sanders, who's also been the butt of a few SNL jokes in his day, expressed his love for the sketch comedy show's portrayal of him. And as for the potential sensationalization of Trump, the political aficionado thinks that the public should continue to focus on what he is — and isn't — doing. "Everyday he says something that is absurd," Sanders replied, while also pointing out that Trump's statements far too often contradict his actions.

But while Baldwin's Trump sketches help bring a greater awareness to just how bizarre the president's behavior can be, there's still a chance that these comical performances could be making Trump more palatable to his critics.

The 2017 Emmys proved this theory to be true when host Stephen Colbert invited Trump's former press secretary Sean Spicer to make a cameo during the opening monologue. Spicer was another one of SNL's victims, and with the help of Melissa McCarthy's hilarious impressions, he became a household name. McCarthy's performances were undoubtedly poking fun at the communications director's bullying tone and seemingly aggressive demeanor, but the laughs garnered at Spicer's expense could have also played a role in getting him on the award show stage.

Spicer announced his resignation from his White House duties in July, leading many to believe that there's turmoil going on behind closed doors. Being on the outside of Trump's administration may have made Spicer seem less threatening to the public, but his prior support of the president's dangerous agenda can never be erased. Needless to say, the overall consensus on Twitter during Spicer's Emmys appearance was disapproval, and Colbert and the Television Academy were criticized for turning Trump's divisive rhetoric into a joke.

As you may recall, Jimmy Fallon was also criticized for having Donald Trump on his late-night talk show during the 2016 campaign. The Tonight Show host talked with Trump about his controversial campaign, giving him a platform to expel disheartening myths about Muslims and other minorities.

However, the interview was said to be far too carefree for the dangerous presidential campaign that Trump was running at the time. Let's just say, seeing Fallon laughing at Trump's jokes and ruffling his hair on national television didn't go over well with many viewers.

Fallon had the opportunity to take a stand against bigotry, but instead, his neutrality only made light of the unorthodox campaign. That's not to say that appearing on The Tonight Show helped Trump win the 2016 presidential election, but Fallon's interview could have very well played a role in normalizing Trump's hateful speech for voters.

Baldwin voicing his concern over the potential effects of his Trump sketches shows that normalizing the president's behavior isn't part of his agenda. If anything, Baldwin's contributions have been more positive than anything on SNL — sometimes laughing at your problems can be the best medicine. But while the laughs have been much-appreciated, maybe it's time to take another approach to addressing Trump — putting the focus on the very serious harm being done to the country, instead of making his uncanny persona the butt of the joke.

More like this
On 'The Handmaid’s Tale,' Christine Ko Fights Back
By Gretchen Smail
'Grey's Anatomy's New Intern Got Advice From Dr. Bailey Herself
By Grace Wehniainen
Paul Mescal, Man Of Mystery
By Samantha Leach and Heather Hazzan
The 'Reasonable Doubt' Cast Includes A 'Save The Last Dance' Reunion
By Grace Wehniainen
Get Even More From Bustle — Sign Up For The Newsletter