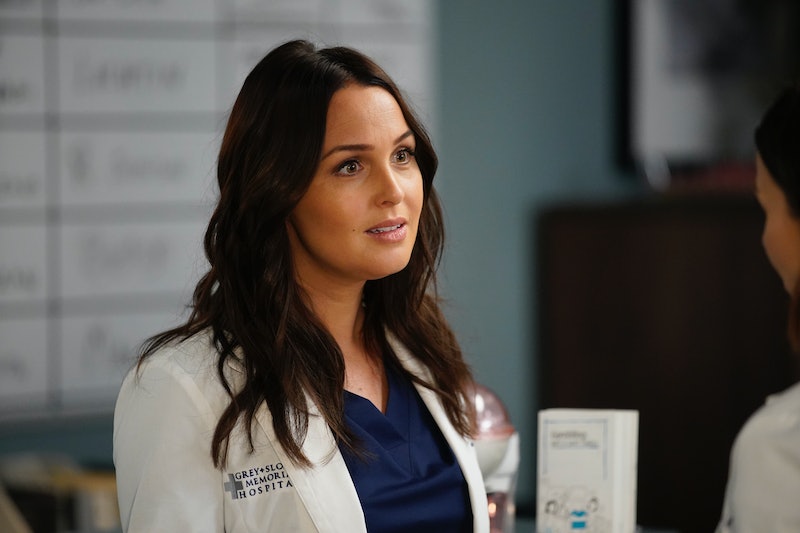 Spoilers ahead for Grey's Anatomy Season 16. The 2020 Democratic caucuses apparently weren't the only bungles to come out of Iowa recently. Now four whole episodes into the show's return from winter hiatus, and fans still have little more to explain what happened to Alex Karev on Grey's Anatomy than the same tired "he's in Iowa" line. The Thursday, Feb. 13 "Save the Last Dance for Me" episode, bestowed upon Webber the honor of rattling off, "He's dealing with family issues in Iowa." How are fans still getting nothing other than these sparsely sprinkled breadcrumbs?

In the same conversation, Webber also gave a possible glimpse into Alex's state of mind, revealing to Hunt that after he'd called to inform him Catherine was closing Pac North, Alex replied via text with a "laugh until you cry emoji with a party hat." The possibly unhinged behavior tracked with Jo's confession that Alex hadn't been returning her calls. "He says that he's going through something and he needs time, and if I didn't know better I would think he was getting revenge from when I needed time," an anxiety-ridden Jo revealed to Amelia in the episode. "But I know he would never do that."

Uh, same. Ghosting Jo? Is Grey's really going to do Alex like this?

When actor Justin Chambers announced his Grey's exit on Jan. 10, he'd been part of the cast for all of the series' record-breaking 16 seasons. And for a show that's had some of network TV's most dramatic sendoffs, to let Alex fade away with a whimper is not only less than the character deserves, it's also far less than what fans deserve. Who knows what's yet to happen, or if Alex will get the respect he deserves? It just feels odd that it's taking so long — whatever the "it" may be.

The behind-the-scenes circumstances surrounding Chambers' abrupt decision to leave Grey's, of course, remain a mystery to the public. For now, there's the explanation Chambers gave in his Jan. 2020 statement to Deadline. "There's no good time to say goodbye to a show and character that's defined so much of my life for the past 15 years," he wrote, highlighting a wish to diversify his acting roles and career choices.

Even if Alex is also trying to diversify his, I don't know, surgical cases in Iowa, fans are going to need some more specificity, as far as the character goes. Alex's beloved co-workers already demanded Koracick re-hire him as a co-chief of the Grey Sloan pediatrics department when he returns from his personal leave. Perhaps Chambers will receive a similar invitation from Grey's because "heartless destroyer of Jolex" is far from the legacy he's earned. And, judging by Jo's heartbreaking return to their empty apartment at the episode's end, it unfortunately seems to be the one he's headed for.

More like this
'Grey's Anatomy's New Intern Got Advice From Dr. Bailey Herself
By Grace Wehniainen
Nicola Coughlan Shared A Lady Whistledown Excerpt From ‘Bridgerton’ Season 3
By Grace Wehniainen, Alyssa Lapid and Sam Ramsden
A New 'And Just Like That' Table Read Pic Confirms A Key Character's Return
By Jack Irvin and Grace Wehniainen
Viserys’ Fate On 'House Of The Dragon' Could Differ From The Book In This Surprising Way
By Grace Wehniainen
Get Even More From Bustle — Sign Up For The Newsletter