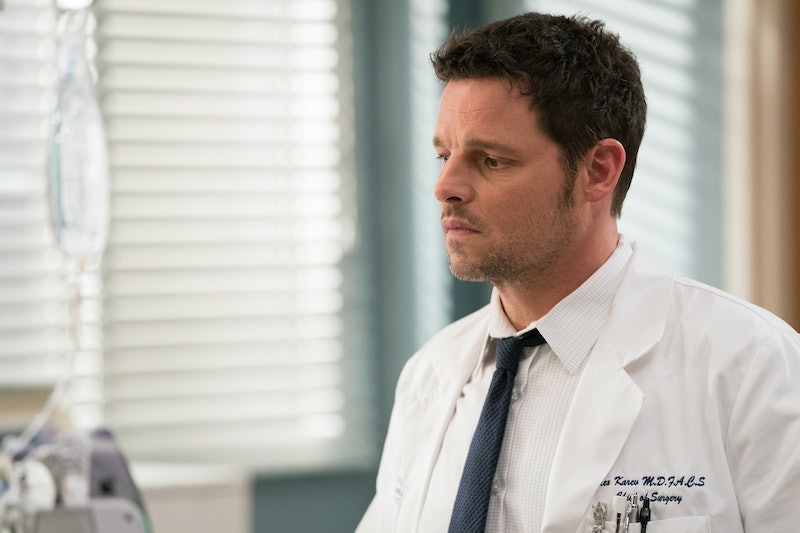 Justin Chambers' exit from Grey's Anatomy left Alex Karev's fate up in the air. But Jo and Meredith will finally learn what happened to him during Alex's farewell Grey's Anatomy episode on March 5. While Alex allegedly went home to care for his mother in Iowa, Jo revealed in "Snowblind" that he was never there, and she doesn't know where he is. The promo for the next episode teased that Grey's Anatomy would finally be "saying goodbye to Dr. Alex Karev," and fans are anticipating an emotional episode. But one potential missing factor of his last episode, entitled "Leave a Light On," is that there may not actually be any new footage of Karev himself.

The last time Alex was seen on Grey's was in November 2019, in the 350th episode, "My Shot," where he helped Meredith keep her medical license. But it wasn't until Jan. 10 that it was revealed that Chambers had left the series after 16 seasons. "There's no good time to say goodbye to a show and character that's defined so much of my life for the past 15 years," Chambers said in a statement. "For some time now, however, I have hoped to diversify my acting roles and career choices. And, as I turn 50 and am blessed with my remarkable, supportive wife and five wonderful children, now is that time."

In a statement to Bustle, ABC confirmed that "My Shot" was the last episode that Chambers appears in. While the network didn't directly state that means Chambers won't be in "Leave a Light On," sources told The Hollywood Reporter there would be no new scenes of Alex for the March 5 episode. So — except for some flashbacks — Alex most likely will not be present in his own sendoff episode.

ABC released in a statement that the March 5 episode will "feature a farewell to Alex Karev, providing closure to his character's exit." Yet, without Chambers' involvement, fans are a bit skeptical about how his goodbye will go. Showrunner Krista Vernoff spoke to Variety on Feb. 13 about how Grey's was handling Chambers' exit. "We're, episode by episode, illuminating the story of where Alex is. And it takes us quite a few more episodes to get there and to give the audience clarity," Vernoff said. But, after the most recent episode, viewers were outraged at even the notion that Alex would abandon Jo with no word since it's out of character for him.

Last season, Jo experienced a lot of pain when she learned that her father had raped her mother. Vernoff noted that the writers were careful to not have "Jo in the same place" as last season. But with Alex's mysterious disappearance, how can Jo not feel an immense amount of grief all over again? Since fans are convinced Alex would never leave Jo (or Meredith, for that matter) with no explanation, the leading theory is that "Leave a Light On" will reveal that Alex has somehow died.

Alex was the last original Grey's intern left alongside Meredith and his sudden exit was a blow to the series. But perhaps "Leave a Light On" will provide at least some form of closure to Chambers' character, as long it stays true to the Dr. Alex Karev that fans have followed and loved for 15 years.

More like this
'Grey's Anatomy's New Intern Got Advice From Dr. Bailey Herself
By Grace Wehniainen
Did 'Grey’s Anatomy' Just Drop A Major Taylor Swift Easter Egg?
By Grace Wehniainen
Nicola Coughlan Shared A Lady Whistledown Excerpt From ‘Bridgerton’ Season 3
By Grace Wehniainen, Alyssa Lapid and Sam Ramsden
The 'Andor' Timeline, Explained
By Gretchen Smail
Get Even More From Bustle — Sign Up For The Newsletter