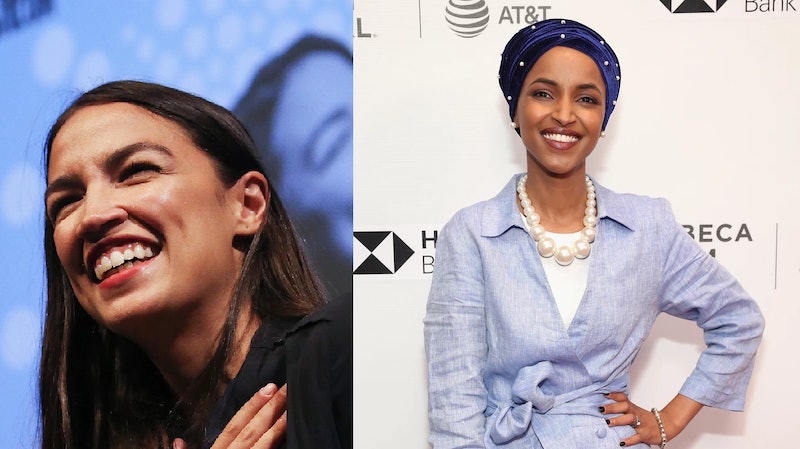 Usually walking into a room and seeing someone wear your same exact outfit is the stuff of sartorial nightmares. You lock eyes, look each other over at the same time, and scowl in annoyed horror as you realize the two of you are wearing the same outfit you chose earlier that morning. But when it comes to Alexandria Ocasio-Cortez and Ilhan Omar wearing the same outfit, it's an inspiration. The newly appointed Representatives Ocasio-Cortez (D-NY) and Omar (D-MN) went to their congressional orientation on Nov. 27 ready to take on Congress, and noticed that they were wearing the exact same blazer — because great minds think alike.

They shared this serendipitous moment on their social media, where Ocasio-Cortez posted a tweet on her Twitter letting her followers know that she and her fellow Democrats were completely in sync starting from day one. "@IlhanMN and I both arrived at Congressional Orientation today... wearing the same outfit," she posted. Omar took it a step further by sharing a video proving the twinning moment, writing, "Full twin mode with my partner in justice @Ocasio2018 #doubletrouble." Not only do they see eye to eye in politics, but they clearly have the same eye for fashion. It's a great start to an alliance.

Not only do they have impeccable work wardrobes, but the two women are an inspiration and are sure to shake up the way that the traditionally male-dominated Congress will work. Ocasio-Cortez was part of the biggest upset victory in the 2018 midterm election primaries, where she defeated the Democratic Caucus Chair Joe Crowley, who was the fourth-ranking House Democrat. Before that, he represented the the 7th district for a whopping 14 years, making him a career politician. He has represented the Bronx and Queens districts for 10 terms in total, and was predicted by many pundits to replace Nancy Pelosi as minority leader. With her victory, 29-year-old Ocasio-Cortez became the youngest woman ever elected to Congress. (Representative Elise Stefanik (D-NY) held the title before her, when she was first elected to Congress in 2014 at age 30.)

Omar is one of the first Muslim women and the first Somalian-American to be elected into Congress. She was one of two female Muslim women to win their races in the 2018 midterm elections, joining Palestinian-American Rashida Tlaib in the House of Representatives, who won a seat in Michigan's 13th district.

Omar is a 36-year-old Somali refugee who immigrated to the United States as a teenager, and took over the district that was previously represented by Keith Ellison (D-MN,) who left his post to run for Minnesota attorney general.

Omar ran on a liberal platform, where she plans to fight for $15 minimum wage, Medicare-for-all, and tuition-free schools. The two women join a league of women candidates who have broken records for the number of women who ran for governor, U.S. House, and U.S. Senate — 112 women are poised to join Congress's ranks come January, breaking a record high and making history. The future is now, and many of these Congresswomen clearly see eye to eye — especially outside of the wardrobe.

More like this
15% Pledge Director LaToya Williams-Belfort On The Impact Of Supporting Black Business
By Dominique Norman
Harry Styles’ Red Carpet Looks Have One Thing In Common
By El Hunt
Bella Hadid's Best Runway Looks Of All Time From Paris, Milan, & More
By Allie Fasanella
Androgynous Formal Wear That Will Make You Feel *So* Fancy
By Megan Lasher
Get Even More From Bustle — Sign Up For The Newsletter