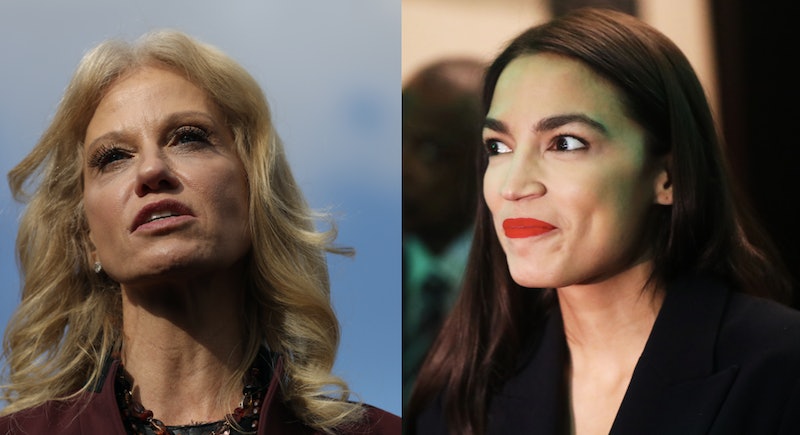 While defending President Donald Trump's comments about the Charlottesville riots, counselor to the president Kellyanne Conway slammed Rep. Alexandria Ocasio-Cortez for allegedly remaining silent about attacks against Christians in Sri Lanka. But the freshmen congresswoman has never been one to keep silent when critics drop her name, and not long after Conway's interview aired Ocasio-Cortez challenged Conway over her Sri Lanka remark. In a series of tweets posted Sunday, the congresswoman accused Conway of trying to "stoke suspicion" about her faith.

"Are you trying to imply that I am less Christian?" Ocasio-Cortez asked Conway in a series of tweets posted Sunday. "What was the point of you bringing this up on national TV?" The New York representative went on to accuse Conway of "using this as an excuse to stoke suspicion around my Christianity [and] faith life."

In an interview with CNN's Jake Tapper earlier in the day, Conway had brought up Ocasio-Cortez' apparent silence regarding a series of bombings in Sri Lanka while defending comments the president had made about a 2017 white nationalist rally in Charlottesville, Virginia, that had ended in deadly violence. "I see officials who get a lot of airtime and ink, like Alexandria Ocasio-Cortez, congresswoman, who tweets many times about the mosque and never once about the Christians being killed in Sri Lanka," Conway said.

In tweets addressing Conway, Ocasio-Cortez said she'd spent the Easter holiday unplugged from technology while visiting family in Puerto Rico. "On Easter I was away from tech visiting my grandmother in Puerto Rico, which continues to suffer from the White House's incompetent disaster response," she wrote. "The Sri Lanka massacre was horrifying.

In a short tweet clarifying her earlier comment on CNN, Conway confirmed she'd been "referring to @AOC silence about the Sri Lanka massacre of Christians." In an apparent attempt to stress the victims' Christian faith, Conway added in parenthesis, "not 'Easter Worshippers' as Obama and Hillary oddly said."

For some Twitter users, it seemed an odd point to stress as even President Trump had referred to the victims as "people" rather than singling out their Christian faith. In her own response to Conway's tweet, Ocasio-Cortez sought to explain why some had chosen to stress the bombings' occurrence during Easter services. "Saying 'Easter worshippers' matters bc Easter is the holiest day of the year for Christians, & to be targeted on Easter highlights how heinous the attack was — just as saying yesterday's #SanDiego shooting was on Passover," the congresswoman wrote.

As part of her response to Conway, Ocasio-Cortez also criticized what she called "the White House's incompetent disaster response" in Puerto Rico following Hurricane Maria in September 2017. She claimed the unincorporated U.S. territory "continues to suffer" as a result of the president's response. "I chose to use the word 'incompetent' when it comes to Trump's response to Hurricane María & the 3,000 Americans who died on his watch, but that's only because I had 280 characters," she wrote. "There are plenty of other words too: Negligent. Inept. Inhumane. Predatory. Take your pick."

The congresswoman went on to ask Conway how she would spin "ignoring and neglecting the largest mass death of people on American soil in decades," adding that the official death count was thousands of people higher than the 64 long reported by the Trump administration. (Trump has previously appeared to cast doubt on officials' numbers by claiming the death toll in Puerto Rico grew "like magic.")

After pushing back on Conway's apparent criticism, Ocasio-Cortez appeared to offer a suggestion to the White House counselor. "No one should be targeted for their religion," Ocasio-Cortez told Conway in a tweet. "If you're so moved, let's do more to welcome immigrants fleeing religious persecution."