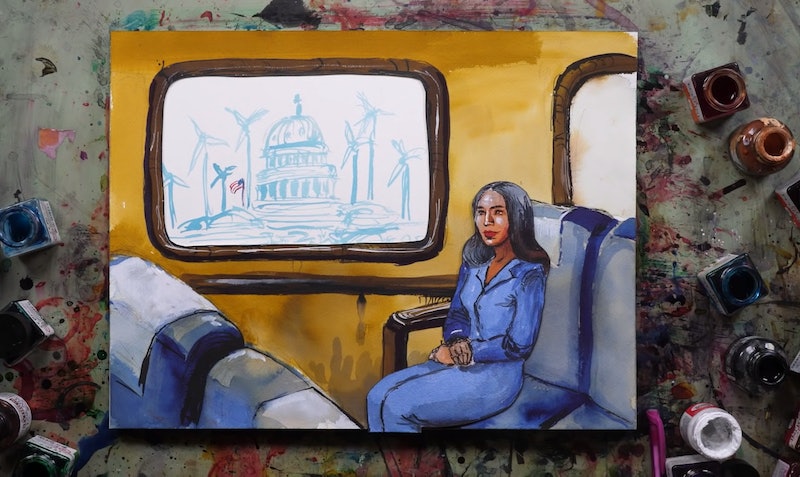 It's a strong message from the future, replete with hope, from one of the youngest congresswomen on Capitol Hill. On Wednesday, The Intercept and political analyst Naomi Klein introduced New York Democratic Rep. Alexandria Ocasio-Cortez's short film on the Green New Deal on YouTube. It's a seven-minute-long clip narrated by the 29-year-old Ocasio-Cortez and its artwork is rendered by artist Molly Crabapple.

In the film, Ocasio-Cortez speaks as if she was talking to her viewers from the future in an America where the Green New Deal "kicked off our social and ecological transformation to save the planet." The progressive Democrat laid out a timeline for her audience and included brief presentations from senior climate scientists such as James Black and James Hansen. Both Black and Hansen alerted the public to the danger of rising temperatures around the world due to fossil fuels in the 1970s and 1980s, respectively.

Given the increasing global temperatures, Ocasio-Cortez said in her film that the Green New Deal is an urgent issue. At one point, she laments that lawmakers haven't taken more action and says "fossil fuel companies made hundreds of billions while the public paid the lion's share to clean up their disasters." As she narrates, Crabapple can be seen painting new scenes, switching to fresh paper, and then painting all over again.

Over the months, Ocasio-Cortez has spoken at great length about what her Green New Deal seeks to achieve. Among other things, the Green New Deal promises to materialize carbon neutrality in the United States within a decade, provide Americans a federal jobs guarantee, and make health care and child care more accessible.

But not everyone is entirely on board with it. At one point in her film, Ocasio-Cortez briefly mentions the opposition that her proposal has received so far from people within her own party. Some Democrats have called the Green New Deal too ambitious or unpractical, claiming that Ocasio-Cortez's plan would require too much funding. But this pushback doesn't seem to faze the lawmaker. In her film, the progressive Democrat pushed against these criticisms and said, "I think that's because they couldn't picture it yet."

In her message-from-the-future clip, Ocasio-Cortez also hints at a Democratic victory. The New Yorker envisions the Green New Deal became reality after the Democratic Party took back the Senate and White House in 2020. After taking control of both, Ocasio-Cortez says lawmakers passed a "flurry of legislation" that prioritized dignified wages and clean environments for everyone.

The film is brief, but if you want to learn more about what the Green New Deal is all about, it certainly lays out a vision. Saving the planet within a few years sounds like an undertaking that is naturally bound to intimidate some people. But as Ocasio-Cortez says in her short film, the future is not predetermined and it can be changed for the collective good of people. At one point, she enthusiastically tells her viewers: "We can be whatever we have the courage to see."