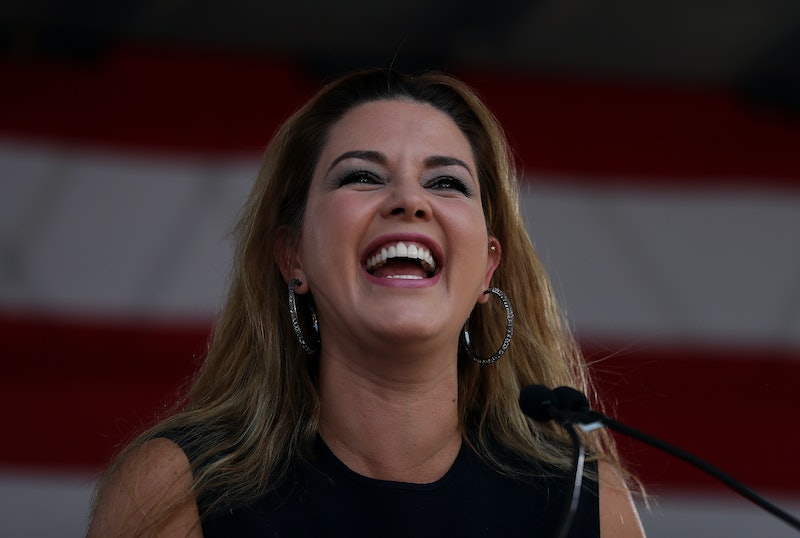 It isn't easy being at the center of a political firestorm — even when you volunteer for it. Former Miss Universe Alicia Machado became a household name during the presidential campaign last fall, when Secretary Hillary Clinton name-dropped Machado as an example of then-candidate Donald Trump's insulting treatment of women at a town hall debate. (Mind you, this was before Pussygate, when this was still somewhat shocking.)

"One of the worst things he said was about a woman in a beauty contest," Clinton said to the audience. "He loves beauty contests, supporting them and hanging around them. And he called this woman 'Miss Piggy.' Then he called her 'Miss Housekeeping' because she was Latina. Donald, she has a name. Her name is Alicia Machado, and she has become a U.S. citizen, and you can bet she's going to vote this November."

The Clinton campaign was immediately ready with a video featuring Machado, and the activist became a powerful symbol for Trump's treatment of and insults towards women.

Not only did she vote, but Machado also became an important campaigner for Clinton, lending her voice in support, and readily sharing the deplorable ways she says Trump treated her, spurring a years-long eating disorder.

Trump's response to her allegations were predictably unapologetic. “I will bet you if you put up and added up all the time I spoke to her, probably less than five minutes,” Trump told Fox News' Bill O’Reilly. “I had nothing to do with this person, but they wanted to fire her. I saved her job because I said that’s what I was going to do. Look what happened? Look what I get out of it? I get nothing.”

Regardless of his denial and Clinton's eventual loss, that Machado came forward with her story set an important precedent of bravery for the many women who would come forward with sexual assault allegations against Trump following Pussygate.

"We have a racist president."

So when I was given the opportunity to catch up with Machado now that we're officially in the Trump era, I was disappointed to find she didn't really want to talk about him — at least, not in specific terms. I was curious what a woman who says she was so acutely victimized by Donald Trump felt about his victory — and the unleashing of his problematic views on women and immigrants upon the world. Machado was willing to talk about our political situation more broadly — and the critiques of Trump briefly found their way in, such as when we discussed the state of immigrant rights today, and how she feels about them.

"I know a lot of people — amazing immigrants and families — nice people with values, doing great things for this country. I'm an immigrant. That is the worst part of this time," Machado tells Bustle. "We have a racist president ... he made [anti-immigrant] promises in his campaign, and he will do it. So we need to be stronger."

Machado's Twitter account is filled with critiques of Trump, but she made clear that she will wait to discuss any details of her experiences with and feelings about Trump for now. What Machado would say is that these are scary times — especially for immigrants.

"A lot of people are scared. A lot of people feel fear about what will happen in our country with this extreme determination from the White House," Machado says. And though she acknowledges that other people have reason to feel scared right now in today's political climate, she's just not one of them. In fact, her career (she mentioned a perfume and line of jeans, among other ventures) is blossoming.

"I feel really relaxed ... I don't feel scared. I'm stronger. I have my career and my life. I'm not living for my personal experience with Donald Trump that happened over 20 years ago. In these last 20 years, I have my name and career [apart from him]. I'm not scared for my world or stability."

So there you have it. Alicia Machado may have called out the man who's now president — but she's still not afraid of him.

More like this
Watch Jacinda Arden’s Devastatingly Honest Resignation Speech
By Sam Ramsden
24 History-Making Black Women You Probably Didn't Learn About In School
By Ayana Lage and JR Thorpe
25 Inspiring Quotes From Black Women To Celebrate Black History Month
By Kyli Rodriguez-Cayro and JR Thorpe
Twitter Is Identifying With Sally Field & Jane Fonda’s Friendship In New Viral Video
By Jake Viswanath
Get Even More From Bustle — Sign Up For The Newsletter
From hair trends to relationship advice, our daily newsletter has everything you need to sound like a person who’s on TikTok, even if you aren’t.