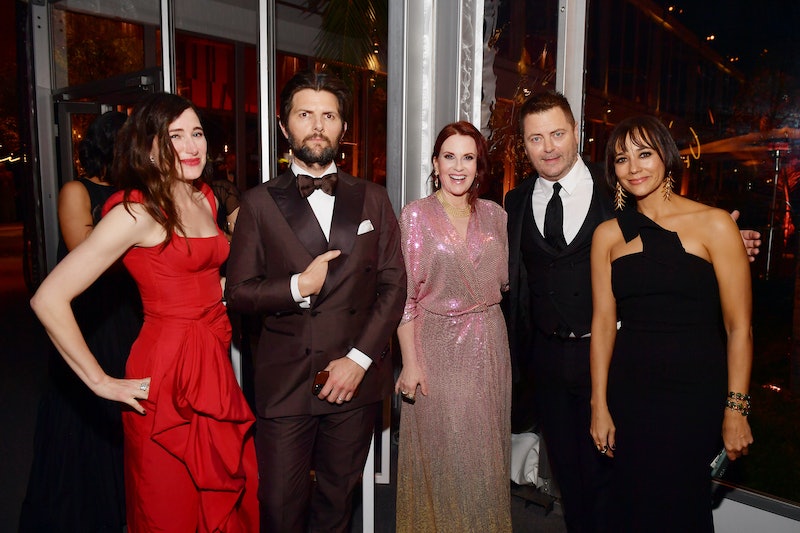 The Oscars may have ended on time this year, but the party kept going all night long. Seemingly every celebrity in town, whether they were nominated for an Oscar or simply wanted an excuse to party, hit up one of the post-Oscars soirees, and there were many of them. These Oscars after party pictures that you may have missed show all of the amazing, and random, interactions that audiences at home missed out on.

As usual, the annual Vanity Fair Oscars party provided a lot of priceless celeb sightings, as stars chowed down on In-N-Out burgers and mingled with well-dressed A-listers. Brad Pitt and Tiffany Haddish had a hilarious, and potentially life-changing, reunion, while Timothée Chalamet posed with seemingly everyone in the room (and that's not even counting him photobombing Margot Robbie on the red carpet).

But of course, nobody could get enough of the night's winners, including Pitt, Laura Dern, and the Parasite crew, including Bong Joon Ho, who continued to be the most lovable person ever long after his historic wins. Oh, the stories he could tell.

After the 2018 Oscars, Haddish joked with Kelly Ripa that Pitt said if they ever met again in a year, and they were both single, they would "do it." Lo and behold, they met once again at the Oscars, and this time Pitt's got a shiny trophy to his name. No word on if they're now Hollywood's new power couple, but this photo is worth a thousand words.

After stealing some of Beyoncé's champagne at the Golden Globes, and receiving one of those coveted Ivy Park boxes, Witherspoon got an invite to Beyoncé's very exclusive Oscars after-party.

Ruffalo posed with Best Supporting Actress winner Laura Dern — and her Oscar — backstage. He posted the interaction on his Instagram stories, accurately calling her an "acting goddess."

J.Lo's Best Supporting Actress snub for Hustlers remains one of the worst things about the 2020 Oscars, and while she rightfully didn't grace the show with her presence, she still had fun at the after-parties, as evidenced by her Instagram.

Billie Eilish and brother Finneas O'Connell stole the show onstage with their cover of The Beatles' "Yesterday" — and had fun at the Oscars after-parties with Chalamet and Stella Maxwell. Talk about a Gen Z dream.

A buddy comedy starring Pitt and Wilson could very well be the best film of all time. Make it happen, Hollywood.

Mark Ruffalo Hung Out With Some Friends

And by friends, he means two-time Oscar winner Mahershala Ali and former nominee Chalamet. What a blessed image.

Lana Condor posed with Andy from Cheer and his championship ring, as captured by To All the Boys author Jenny Han. The Netflix family reunion also featured Jerry Harris.

Pitt apparently made it a point to talk to Kim K, who, according to Entertainment Tonight, went out on the town with her hubby, Kanye West. To be a fly on the wall during that conversation.

Usher met pop phenom Billie Eilish and got to chow down on In-N-Out at the Vanity Fair Oscars party. He's living the dream.

Parasite became the first foreign language film to take home the grand prize of Best Picture, along with three other wins, and director Bong Joon Ho continued to be the most adorable person ever as he apologized to the award engraver for winning too many Oscars. It's a truly well-deserved humble brag.

Timothée Chalamet Made A Subtle Tribute To Kobe Bryant

This isn't an after-party pic, but it's too good to be missed. Chalamet shared a poignant backstage photo of Spike Lee, dressed in a purple and yellow suit to honor Kobe Bryant, looking at the TV screen as the show itself paid tribute to the late Lakers players. Tissues, please.

There Was A Mini Parks & Rec Reunion