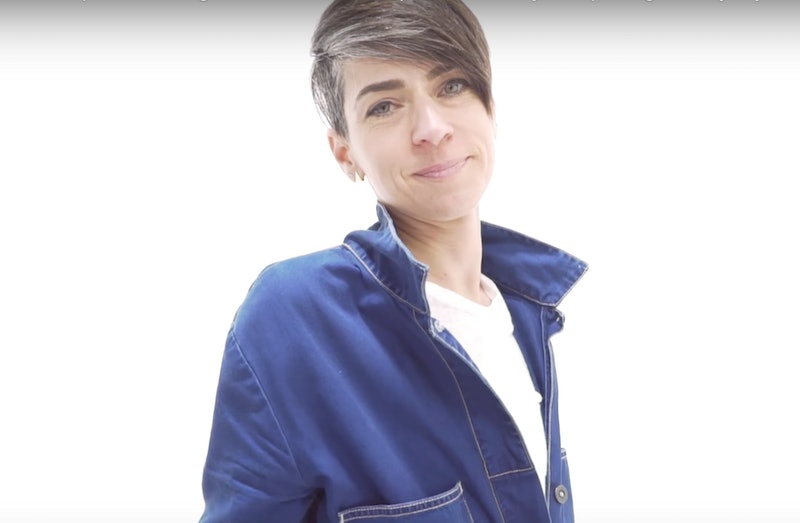 In a video for Allure’s “Dispelling Beauty Myths” series, a woman looks into the camera and declares, “My name is Samantha Paige, and I’d like to dispel the myth that breasts equal femininity.” The artist and cancer survivor recounts her relationship with her breasts — and the lack thereof — after being diagnosed with the BRCA gene and undergoing a preventative double mastectomy nearly a decade ago. Paige movingly discusses how she came to connect with her own body — and her ultimate realization that breasts don’t define her as a woman.

Paige, an L.A. native who lives in Santa Barbara, California, was diagnosed with thyroid cancer as a young woman in her early 20s. She beat the disease, but the experience profoundly impacted her sense of self. Recalling the moment when she was diagnosed, she said, “I, maybe not in that particular moment, but in those months disconnected from my body.”

Paige later tested positive for the BRCA 1 gene mutation, meaning that she had a dramatically increased risk of developing breast or ovarian cancer during her lifetime. (Paige’s own mother was diagnosed with breast cancer at 31.) She decided to have a preventative double mastectomy, and underwent the procedure seven months after giving birth to her daughter.

Afterwards, she discussed breast reconstruction with her doctor. She said that when she saw the options for implants, she thought, “Really? This is it?” The idea that she wouldn’t get implants didn’t even seem to be an option. “If doing nothing was presented, it was certainly not presented without bias, and I don’t recall it being presented,” she said.

She didn’t like the implants. They “were heavy and uncomfortable and didn’t move around at all,” she said. Nevertheless, feeling pressure to conform to feminine norms, Paige kept them for eight years.

In January of 2016, Paige decided to make a change. “A friend of mine came over. She said, ‘I’m thinking of having my implants removed,’” she recalled. It was like a light going off. Paige knew she had to do the same. "I called my doctor the next day, and he said, you will be flat, best case scenario… but it’s also likely that you might be concave,” she said.

Paige wasn’t deterred. “It was as if all of the decisions that had come before led to this moment of utter clarity and utter knowing of self, and to be able to confidently say, ‘Yes, I want to be flat, I’m excited to be flat,’” she said.

Paige is happy with the results — and living withou tbreasts hasn’t negatively impacted her sense of femininity. If anything, it’s only made her feel more in touch with her body. “I’ve never felt more feminine,” she says in the video. “I feel more like a woman than ever before without my breasts.”

You can check out more of Allure’s “Dispelling Beauty Myths series here, and you can find out more about Samantha Paige and her work on Instagram.

More like this
Black Women's Equal Pay Day Highlights An Upsetting Problem
By Brandi Neal
Megan Rapinoe's Relaxation Hack Is Super Dreamy
By Carolyn Steber
This Psychological Effect Might Be Keeping You From Hitting Your Goals
By Lexi Inks
Help! I'm Not Getting Any Attention On Dating Apps. What Can I Do?
By Sophia Benoit
Get Even More From Bustle — Sign Up For The Newsletter