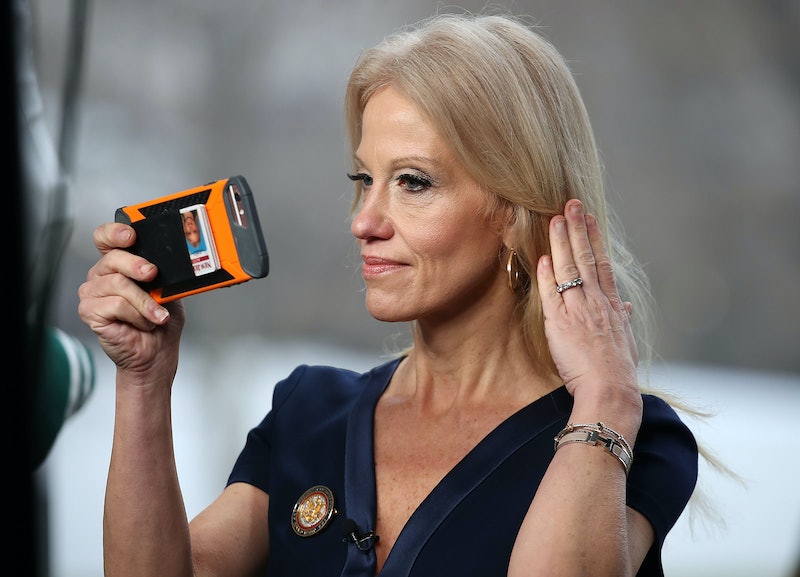 On Sunday, President Trump's top advisor Kellyanne Conway said that the administration wasn't lying when it said that Trump's inauguration drew the largest crowd in American history — it was simply spreading "alternative facts." This is a patently absurd concept; "alternative facts," as Conway said, do not exist, and by suggesting otherwise, the White House has given the public sufficient reason to distrust any and all information it provides over the next four years.

It began on Saturday, when White House Press Secretary Sean Spicer claimed that Trump's swearing-in ceremony drew "the largest audience to witness an inauguration, period." Spicer offered no evidence to support this assertion, and an abundance of evidence suggested the exact opposite. Politifact deemed Spicer's claim a "pants on fire" lie, and it was.

Enter Conway, officially Trump's top advisor and unofficially his top spokeswoman. Conway appeared on Meet The Press Sunday to speak with Chuck Todd, and when Todd confronted her about Spicer's lie, she defended him by inventing the fictitious and self-contradictory notion of "alternative facts."

"The president asked the White House Press Secretary to come out in front of the podium for the first time and utter a falsehood. Why did he do that?," Todd asked Conway. "It undermines the entire credibility of the White House press office on day one."

"You're saying it's a falsehood," Conway said. "And they're giving — Sean Spicer, our press secretary, gave alternative facts to that."

This was an stunningly brazen piece of pure bullshit, and given that Conway is one of the most brazen bullshitters in American government, that's really saying something. I can't believe I have to say this, but "alternative facts" aren't a thing. A statement that contradicts a proven fact is called a lie (or a falsehood if we're being charitable).

It would be one thing if Conway was disputing the accuracy of the information provided to her, but she wasn't. When Todd said that Spicer had inaccurately represented the inauguration's crowd size, Conway didn't say that Todd was wrong. What she did was much worse: She said that the precise opposite of what Todd said — that is, the precise opposite of the truth — wasn't a falsehood, but rather an "alternative fact."

But as anybody with even a fleeting grasp of the English language understands, the opposite of an accurate claim is not an "alternative fact." It is a lie. If I were to tell you that more Americans voted for Trump than for Hillary Clinton, for instance, I wouldn't be providing you with an "alternative fact." I would be lying to you. And that is what Spicer and Conway are doing.

We can mock Conway's linguistic acrobatics until the cows come home, but the ramifications of her comments are far more serious than they may seem right now. Right now, she and the White House are knowingly lying to the American people about a relatively benign topic — crowd sizes. At some point, though, Americans will require answers on far more substantive issues.

What happens the next time America is attacked? Will the White House provide the public with factual information in the aftermath, or will it give us "alternative facts" that make the Trump administration look good? If there's a serious outbreak of a disease in the states, will the White House's "alternative facts" be enough to keep Americans safe? How about if there's a border clash between U.S. and foreign troops, or some other manner of diplomatic incident? Will the government be honest about what is happening, or will it feed us "alternative facts?"

By peddling this obvious snake oil, the White House is telling us loud and clear that if we seek the truth, we must not rely on the government, at least not while Trump is in office. Going forward, and especially in times of crisis, non-governmental organizations — such as advocacy groups, think tanks, and yes, the media — will be absolutely crucial sources of information. This is doubly true during any incident that, if accurately reported, could make Trump or his administration look bad.

In general, it's always wise to question the government's official line on, well, anything. This is now more true than it's ever been: Although plenty of administrations have lied to the American people before, Trump's may be the first to publicly acknowledge and embrace the fact that it is lying. This means we have no excuse to delude ourselves otherwise. Maybe we should thank Conway for giving us such clarity.