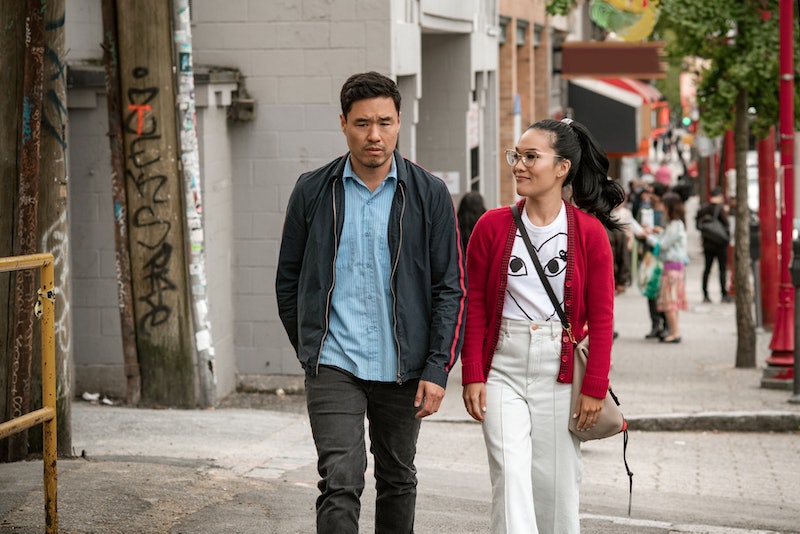 From Say Anything to Notting Hill, we already know how our favorite '80s and '90s rom-coms end. It's the pleasing nostalgia they inspire that we never really grow tired of. Coming to Netflix on May 31, is new addition to the genre, starring and co-written by Ali Wong and Randall Park (Michael Golamco rounds out the writing team). Speaking to Bustle ahead of the film's release, director Nahnatchka Khan explains all the ways in which Always Be My Maybe is a modern-day tribute to When Harry Met Sally, and other enduring classics.

Wong, Park, and Khan all met on the set of ABC's family comedy Fresh Off the Boat, with Wong writing, Park starring, and Khan running the show. "[Ali and Randall] had this idea forever," Khan says. "And we all started talking about how much we loved [When Harry Met Sally], and what a great rom-com that was because it was a true two-hander. It was 50/50, equally weighted. You cared about both Harry and Sally, and how that's really challenging to do." The director goes on to point out that many rom-coms, especially recent ones, are "a big ensemble with multiple storylines" or focused heavily on one of the two leading characters. Developing a new story inspired by the Meg Ryan and Billy Crystal film "through Ali and Randall's eyes" is why Khan was interested in the project in the first place.

The Sally and Harry of Always Be My Maybe are childhood best friends and neighbors Sasha Tran (Wong) and Marcus Kim (Park). Sasha, whose parents were never home, spent a lot of time at the Kim household and was basically part of the family. But when tragedy strikes, Sasha and Marcus's relationship changes, too. Flash forward to several years later, when Sasha's a successful celebrity chef based in Los Angeles, while Marcus is a local musician who helps run his dad's home repair business by day. The two meet again when Sasha makes her way back to her hometown of San Francisco to open a new restaurant, and this kindles a romantic spark between the two.

Khan's directorial vision for this friends-to-more-than-friends story involved other romantic comedies you know and love. She also mentions Bridget Jones's Diary and Notting Hill as having "that classic romantic look was what I was going for visually." She adds that she wanted "the movie to feel warm like that, and inviting, but also grounded."

From the early montage with young Sasha (Miya Cech) and young Marcus (Emerson Min) going out at night in San Francisco, riding the tram and taking pictures at a photo booth, to the car ride convos, walk and talks, and that Chinese diner scene in the middle of the movie — there are many parts of the film that feel like an homage to the rom-coms that came before. Its stars have the familiarity and the chemistry to convincingly play old friends. And though you may not be from the Bay Area, Always Be My Maybe will make you feel right at home, the way You've Got Mail makes anyway watching feel as though they know their way around the Upper West Side.

Bringing together a tried-and-true visual identity with new genre voices was Khan's intention. "I'm very proud of the way we have sort of achieved that balance, because it feels modern, and fresh, and current because it is Ali and Randall," the director says. "Because it is their voice, and my voice, and I'm putting that against the backdrop of a classic look. I think it's a nice combo."

Because Khan, Wong, and Park all knew each other going into this project, pulling off the film was a relative breeze. "It was super collaborative, nobody was precious about anything," Khan says. "It was never a thing where somebody was fighting to keep something out or to keep something in ... I think the hardest part was just making sure we got everything, because there was so much gold, in my opinion."

Of course, with an hour and 41-minute run time, some jokes had to be cut out for the sake of the story. "Hopefully, maybe we can put it in some extras or something," says Khan. We'll take all the deleted Wong and Park scenes we can get.

More like this
12 ’90s Movie References You Missed In 'Do Revenge'
By Radhika Menon
Margot Robbie Breaks Her Silence On *That* Viral 'Barbie' Moment
By Maxine Harrison
The Trailer For The Whitney Houston Biopic Has Twitter Feeling Heated
By Radhika Menon
24 Years Ago, 'Friends' Dropped Its Most Underrated Ross & Rachel Episode
By Grace Wehniainen
Get Even More From Bustle — Sign Up For The Newsletter