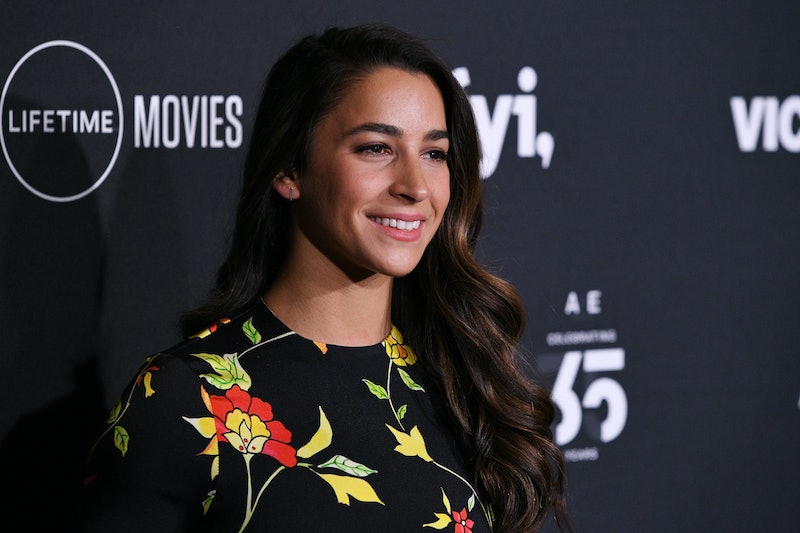 On Tuesday, activist and former gymnast Aly Raisman visited Sacramento to support a California bill that aims to extend the statute of limitation for claims “arising out of sexual assault or misconduct by a physician occurring at a student health center." Assembly Bill 1510 aims to give accusers of former USC gynecologist, Dr. George Tyndall, the ability to seek civil court justice. As of Tuesday, over 600 women have spoken out against Tyndall — but certain claims can only be brought against him if this bill passes.

Dr. Tyndall has adamantly denied any wrongdoing, according to The Los Angeles Times, who first uncovered the story. As for how Raisman became involved, she is a survivor of sexual assault and testified publicly on her abuse at the hands of Larry Nassar. Nassar worked as a doctor for both Michigan State University and USA Gymnastics, and is currently serving out a life sentence in prison after over 250 women accused him of sexual abuse. He was sentenced in 2018, after being convicted of seven counts of criminal sexual misconduct.

To NBC News on Tuesday, Raisman explained how similar the two cases appear to be. She said, "It's the same story ... so many people knew about it and covered it up." Raisman then went on to argue that she didn't think "there should be a statute of limitations when it comes to abuse." At another point, she said, "It's not just the fact that I was abused by a trusted adult, it's the fact that there were so many adults around me that looked the other way and covered it up."

As for why she's become involved with this case in particular, Raisman brought up the fact that over 600 women have since come forward with allegations against Tyndall. She said to NBC:

When I heard there was about 600 women that had come forward, and George Tyndall's still not in jail, it's just, it just makes me so angry and also scared. I mean, we live in a world where 600 women are accusing a man of sexual molestation, and he's not in jail. It's just, it's disgusting and it's wrong.

The reason why these women aren't able to file claims against Tyndall without this new bill has to do with the current legal timeline around the statute of limitations. As AB 1510 notes, if individuals want to file a civil action claim for "damages suffered as a result of sexual assault," they have to do so within 10 years of the act itself. And since many of the claims against Tyndall dated back decades, accusers require AB 1510 in order for their voices to be heard.

In 2018, USC settled a class action lawsuit with Tyndall accusers, to the tune of $215 million; the university also allowed Tyndall's quiet retirement. But for those who wish to see Tyndall charged legally and tried for the crimes laid against him, the statute of limitations will have to change.

On Tuesday, Raisman spoke out alongside other apparent survivors, saying in part:

I stand here today with an army of survivors. More than 600 of George Tyndall’s survivors have come forward — 600 — accusing him of abuse. And, yet, no charges have been filed. How can this be? What message does it send to survivors? To potential future victims? To abusers?

The bill will be voted upon in the state capitol in the coming days.