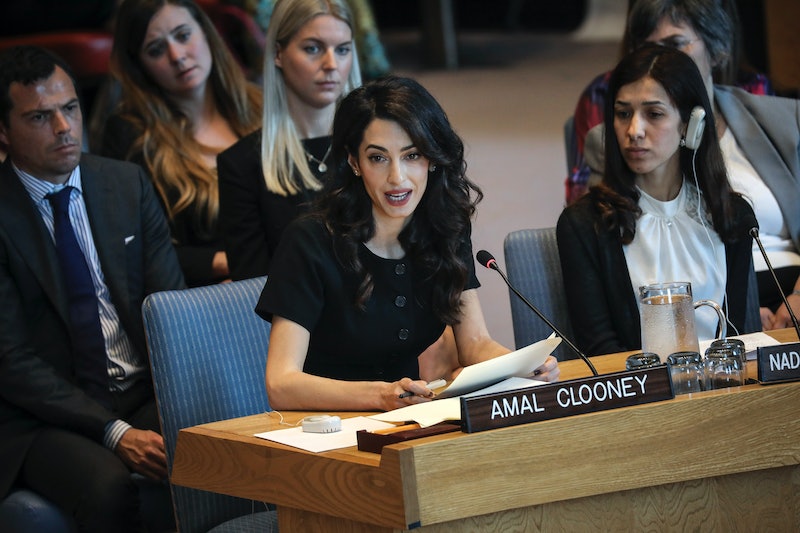 Earlier this week, the Trump administration threatened to veto a U.N. resolution condemning rape and sexual violence as a weapon of war, over language that it considered to be implicitly supportive of abortion. This has concrete ramifications for women who survived rapes during wartime, though, as one prominent human rights lawyer declared at the U.N. in some very strong words. Amal Clooney called it the Trump administration's "Nuremberg moment," referring to her claim that it was denying justice to rape survivors.

“This is your Nuremberg moment. Your chance to stand on the right side of history,” Clooney said before the U.N. security council, according to a video from The Guardian. “You owe it to the thousands of women and girls who must watch ISIS members shave off their beards and go back to their normal lives while they, the victims, never can.”

Clooney was referring to the Nuremberg trials, which were held in Nuremberg, Germany between 1945 and 1949, as History.com explains. Their purpose was to try and convict the Nazi war criminals after World War II ended, for the numerous crimes they carried out before and during the war. As Clooney argued in her brief, the Trump administration was preventing a similar form of justice from taking place with alleged war criminals from the Islamic State. Bustle has reached out to the White House for comment.

"I'm legal counsel to Nadia [Murad] and to other Yazidi women and girls who were bought, sold, enslaved, and raped by ISIS," Clooney said to open her speech, according to a video from NowThis. "And my brief is the pursuit of justice."

The Yazidis are an ancient religious minority native to Iraq, according to The Guardian, and ISIS persecuted, tortured, and murdered members of the group as it gained power in 2014. Nadia Murad, a Yazidi woman who survived torture and sexual violence at the hands of ISIS, went on to win the Nobel Peace Prize in 2018 for her efforts to prevent sexual violence from being used as a weapon of war, according to Deutsche Welle.

Clooney explained that through the Trump administration's actions taken against the International Criminal Court and its efforts to water down the U.N. resolution against sexual violence in war, it was effectively standing in the way of people like Nadia seeing justice brought to those who tortured and raped her.

"Nadia told me of her suffering at the hands of 12 different ISIS men who enslaved and brutalized her," Clooney said in her brief, according to NowThis. She then continued:

[Nadia] recounted the murder of her mother and brothers. She never expressed fear for her life, for her safety. Instead, that day, and ever since, she has spoken of only one fear: that when this is all over, the ISIS men will just shave off their beards, and go back to their normal lives. That there will be no justice.

As Clooney said, though, "justice is not inevitable." The U.N. resolution ultimately passed in the version that the Trump administration found acceptable, according to The Guardian, but Clooney made it clear that more needs to be done in order for Nadia and others who survived similar terrors.