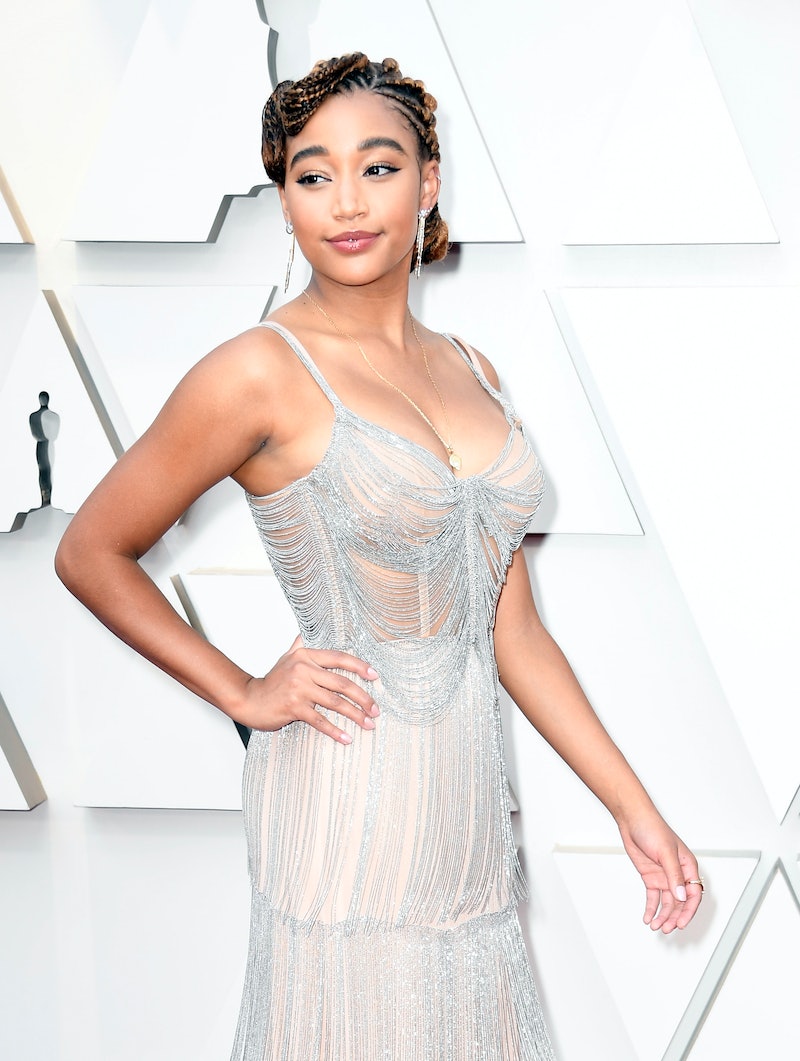 Something big is on the way from one of young Hollywood's most admired actors. According to a recent tweet from Netflix, Amandla Stenberg will star in Netflix's new musical series The Eddy, an eight-part dramatic musical mini-series directed by Damien Chazelle. The news was officially announced on Monday, May 6, but Stenberg actually hinted at her newest project when speaking to Bustle a few weeks back and filling out the Bustle Booth.

Netflix announced the casting news via their @seewhatsnext handle on Twitter on May 6. "Amandla Stenberg will star in #TheEddy," the tweet read, "Damien Chazelle's eight-part musical drama as Julie, the daughter of Elliott (Andre Holland) who suddenly shows up in Paris and forces him to face his past."

According to Deadline, the musical is already pretty stacked with a ton of big names on the production side. There are three multi-award-winning directors on board, including Chazelle — who nabbed an Oscar for La La Land in 2017 — Houda Benyamina, and Alan Poul. Writer Jack Thorne has been confirmed as a writer, and Glen Ballard — the six-time Grammy-winner behind Alanis Morisette's Jagged Little Pill and Michael Jackson's Bad — will be in charge of composing the music.

In addition to the short synopsis Netflix provided in its recent tweet, The Hollywood Reporter described The Eddy as "a musical drama that is set in contemporary multicultural Paris and revolves around a club, its owner, the house band and the chaotic city that surrounds them." While additional details about the series are currently few and far between, it already sounds like it's going to be pretty great.

When Bustle spoke to Stenberg at Coachella in April, the actor actually hinted at her involvement in The Eddy during a brief questionnaire. Well, kind of. That's what it seems like in retrospect, at least.

Towards the end of the questionnaire, Stenberg was asked to "Draw 3 emojis that describe your next movie." OK, technically, The Eddy isn't exactly a movie — it's a multi-part series — but the emojis she chose *do* perfectly describe her upcoming Netflix project.

The three emojis Stenberg drew were: 1. a microphone, 2. a trumpet, and 3. the crying face. Based on what we know about The Eddy, there's definitely singing (the microphone), a house band which probably includes a trumpet, and when one character forces another to confront their past, the tears are bound to flow. See? Spot-on, right?

If you're itching for more info on The Eddy, well, there's not a whole lot out there right now. Variety noted that the show will feature dialogue in French, Arabic, and English, which is undoubtedly a uniquely creative touch. The outlet also reported that the series will debut sometime in 2020, so you won't have to wait *too* long for it to hit the streaming service.

Hopefully, Netflix will continue to release details about the new musical as its premiere date draws closer. In the meantime, though, you might want to re-watch Stenberg in Beyoncé's Lemonade, and start getting excited about the skills she'll be bringing to the small screen next year.