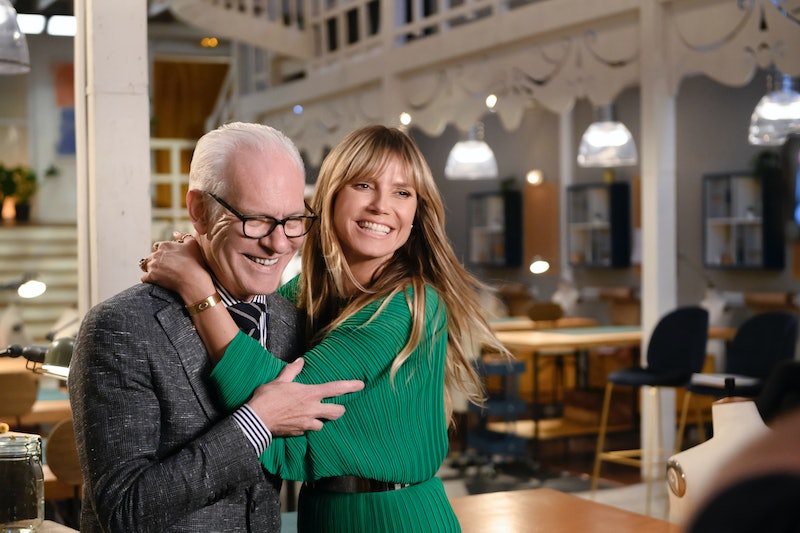 Fashion superstars Heidi Klum and Tim Gunn are back in Amazon's Making the Cut trailer. The 10-episode competition series will reunite the Project Runway favorites for a brand new show about designers who are committed to making their dreams come true. But that's where the similarities between the two competition shows end, because this globetrotting series is also taking corporate synergy to a whole new level by bringing the winning designer's collection to Amazon.com. That means viewers will be able to actually shop the looks they see on Making the Cut.

As Klum explains in the trailer, the winner will receive $1 million to create a collection that will be available exclusively on Amazon. Additionally, limited editions of the winning looks from each episode will also be available via Amazon, allowing for more than just one of the designers to get their work out in the world. "This is the biggest opportunity of my life, I can't mess this up," Rinat Brodach, a contestant from New York City, says of the opportunity.

The stakes are high for the 12 designers and entrepreneurs competing to take their careers to the next level, but Gunn and Klum are there to guide them every step of the way. At one point in Amazon's preview, Gunn says he and Klum are like "proud parents." He also makes it clear to the designers just how important it is for them to put every ounce of themselves into their creations. "You have to have an intense fire in your belly," he tells the designers. "I believe in you; I know you have the fire... you have to fight."

Over the course of 10 episodes, the contestants will visit three fashion capitals: New York, Paris, and Toyko. Along the way, they'll face competitions that not only test their ability to design unique looks, but also their business skills. And they won't just have to impress "proud parents" Gunn and Klum, they'll also be presenting their designs to famous guest judges like Naomi Campbell, Nicole Richie, Joseph Altuzarra, Carine Roitfeld, and Chiara Ferragni.

In an Oct. 2018 interview with The Hollywood Reporter, Klum discussed what makes Making the Cut unique when the show was still in the early stages of development. "I'm really trying to straddle the artistry of fashion design and the commerce part of it. When you're online and you're watching your favorite show, which is hopefully going to be ours, you'll have the commerce aspect for the first time," she told THR. "We never had that aspect where we could actually help the designers to really branch out into the real world like this on Project Runway."

Viewers can watch the show — and shop the looks — when the first two episodes premiere Friday, Mar. 27 on Amazon Video.