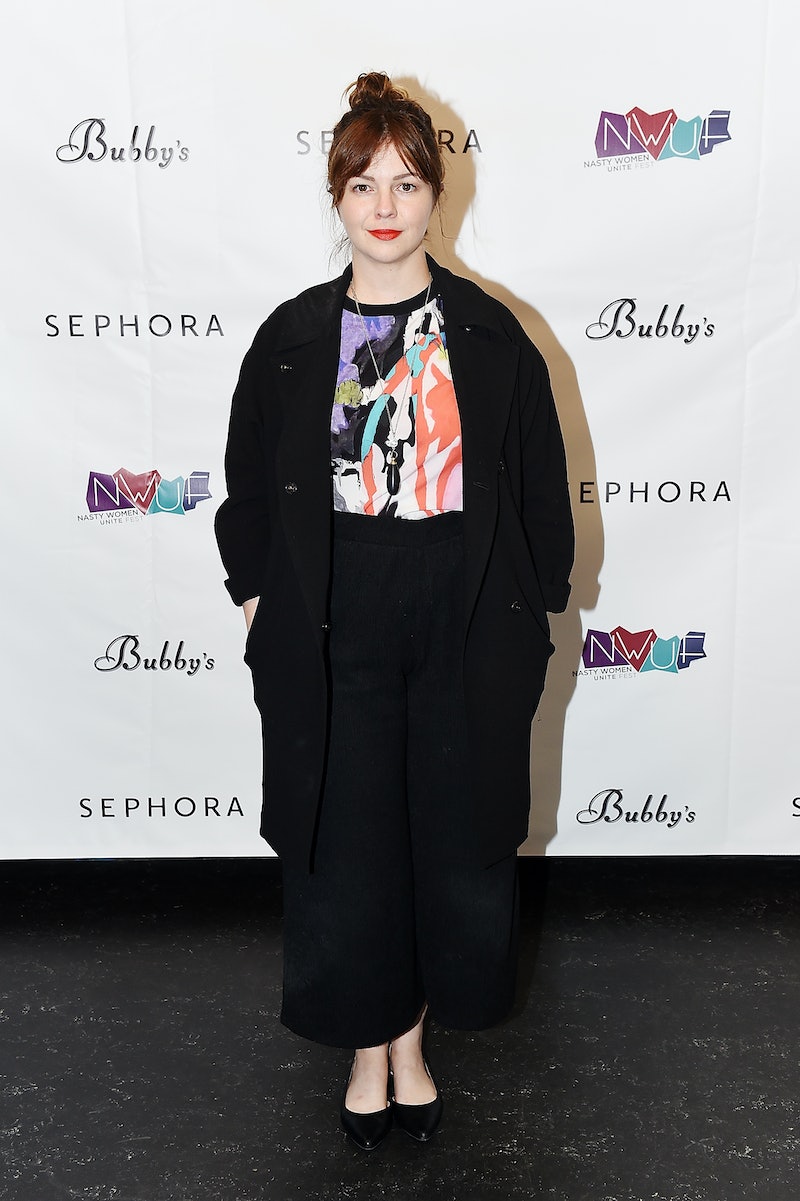 You've heard the joke: If men got pregnant, abortion would be legal. If men got periods, tampons would be free. Of course, these "jokes" are generalizations that ignore the experience of many non-cis individuals, but the underlying sentiment remains true: White cis men are primed by society to exert control over all other bodies. So when I learned that Amber Tamblyn, an actress, activist, survivor of abuse, and founder of the Time's Up movement, had written a novel titled Any Man that centers on several men who are sexually assaulted by a serial female rapist who goes only by the internet screen name "Maude," many questions floated through my mind, with two being most prominent. The first: "If men were more prominently and largely the victims of rape, would the response to rape be different?" The second, more urgent question: "Do we need this novel?"

Men do get raped — according to data provided by the Department of Justice to RAINN, one in 10 rape victims is a man. But it's undeniable that sexual violence is a problem that overwhelmingly affects people who are not cis men — the other nine out of 10 people. It is a problem that largely affects women, particularly those who are marginalized.

Any Man by Amber Tamblyn, $11, Amazon

To return to the first question — would the response to victims be different if men were the victims of rape as often as women? — the answer is unclear: In some ways, yes; In other ways, no. Any Man begins with the story of a rape that is, by all accounts, so brutal one would assume it would shield the first victim Donald Ellis, a father and husband, from the victim-blaming that has become part-and-parcel of the process of reporting and discussing sexual assaults. However, when details from the night emerge — he had been drinking, he had met a woman at the bar and conversed with her, even though he is married — the media rushes to implicate him for his own assault. This is a story we have heard before, again and again. He is shamed for being a victim and being a man does not protect him from that, nor does it protect him from the emotional trauma he suffers in the aftermath. In one particularly heartbreaking scene, Ellis describes how he now arrives at social functions hours ahead of time so he can sit in his car and practice his smile. "The human smile no longer makes sense to me," he says. "Why is it a sign of happiness?" Tamblyn truly shines in her poignant and painful explorations of the emotional, physical, spiritual, mental, and psychological trauma of sexual assault, and writing about a world in which men are living in terror of a female rapist exposes the reality that's so common for women — like dressing a certain way, drinking cautiously in public — as the necessary absurdities they are.

However, it cannot be understated that Ellis — and the other victims in Tamblyn's book — are largely believed. Her male characters, unlike women in real life, largely do not have to go through the painful process of convincing people that they are the victims of sexual assault. One of the most profound chapters of the book is comprised solely of fictionalized tweets from real-life publications and celebrities. This section is particularly powerful — it is a simple, cut-throat, and brutally effective commentary of the media, of social media, of our collective obsession with "true crime" stories that mostly erase the experience of the victims and their families. The tweets about men being raped are retweeted and liked over and over again — but tweets about women being raped are largely overlooked. For example, in the novel, a tweet "posted" by the Associated Press about the latest male victim of the serial female rapist is retweeted 163,000 times. However, a tweet "posted" by the Chicago Tribune about an ongoing manhunt for a young white male who drugged and raped a young woman on a university campus is retweeted zero times. In Tamblyn's fiction, as in reality, the suffering of men takes priority over the suffering of women.

The second question — Do we need this book? — is more difficult to answer. When I ask if we need this book, what I am asking more specifically is: Does this book push the conversation about sexual assault forward in a meaningful way?

In an interview with the NY Post, Tamblyn was asked why she decided to make her rapist a woman. "It’s very rare you find a female protagonist that is violent and volatile without reason," she said. "I wanted to shatter that as an archetype. I wanted to create someone who did it for the reasons that people actually sexually assault other people. It’s not about sex; it’s about power." She added: "It’s important to remember that sexual assault knows no race, no gender, no class. It’s something that harms all of us."

In the novel, the female rapist is, indeed, presented as someone who acts without clear motive. In the final scene of the book, she admits she has no motivation for her crimes: "It's not revenge. It's not payback. Nothing was done to me. It's just something I like to do now and again."

Tamblyn's answer troubles me for a few reasons: Yes, sexual assault harms us all, but it harms women more than others. And no, rape is not just about power. It's also very much about sex. When a man pushes too far and penetrates a woman in the anus when she only agreed to be penetrated in the vagina, that is an act of sex and an act of power. In a 2017 piece for The Cut titled "If We Can't Talk About Sex, We Can't Stop Sexual Abuse," Maureen O'Connor argued: "It’s often said that sex crimes are as much about power as they are about desire. But whether these acts are driven by sex, or merely disguised as sex, they’re still playing out on the stage of America’s sexual culture [...]"

Rape is about so much more than mindless violence and power. It is also very much about sex — about who gets to have it, who gets to enjoy it, and who gets to control when and how it happens.

When Tamblyn flipped the script, she created a female rapist who does not exist in a reality that looks anything like our own. In our reality, rapists have motivations — deep-seated, culturally founded motivations — and some rapists do want sex. Perhaps her female rapist is violent without reason, but male rapists are violent for many reasons — including power and sex, all of which are rooted in cultural, political, and social structures that prioritize male comfort over female comfort and male pleasure over female pleasure. We can't solve for a problem that exists without reason, but we can solve for a problem with roots and causes we can identify. In flipping the script, Amber Tamblyn creates a narrative that's certainly thought-provoking, but not entirely effective as satire or commentary, because the story of a female serial rapist doesn't reflect the world we live in.

Perhaps Tamblyn's insistence on using a female rapist will prove beneficial in one way: It's just controversial enough that people might read it. I worry, however, that the people who will read this book already know these stories by heart. Is this novel a useful addition to the movement to end sexual assault? Yes, in that I think it will spark important conversations — if this article is any indication, it seems it already has.

More like this
Women Around The World Are Cutting Their Hair In Solidarity With Mahsa Amini
By Darshita Goyal
Black Women's Equal Pay Day Highlights An Upsetting Problem
By Brandi Neal
Nicola Coughlan Shared A Lady Whistledown Excerpt From ‘Bridgerton’ Season 3
By Grace Wehniainen, Alyssa Lapid and Sam Ramsden
She Founded American Girl To “Bring History Alive.” Then She Made Over A Town.
By Amanda FitzSimons
Get Even More From Bustle — Sign Up For The Newsletter