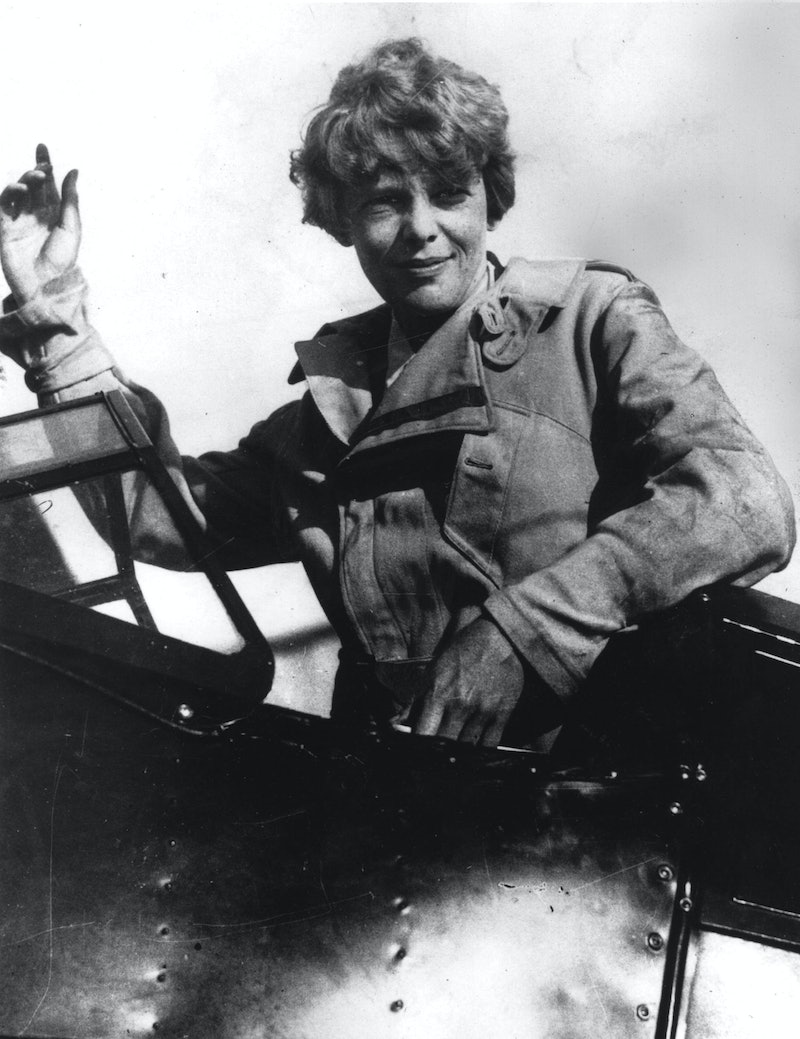 Most people would agree famed aviator Amelia Earhart was an exceptionally badass human being — not just for her record-breaking piloting skills, but also for her advancement of women's rights. In case you needed more proof that she was cooler than any of us could ever hope to be, a newly-unearthed letter from Earhart to the New York Times shows that when she wasn't afraid to correct one of the most well-respected publications in the nation when they referred to her by her husband's name.

Although she flew solo in the skies, Earhart hitched her ride to a book publisher, George Putnam, back on the ground in 1931. This being the 1930's, it was customary to refer to her as Mrs. Putnam rather than Ms. Earhart from that point on. Even aside from equating a woman's identity with her marital status, this practice could pose a public-relations problem; people were used to seeing Earhart's name, not her husband's, in national headlines. Naturally, the pilot preferred to be identified by her professional name in the media.

On Thursday, the Times released a 1932 letter in which Earhart pointedly asked Arthur Hays Sulzberger, the newspaper's publisher, to address her by her own name. "Despite the mild expression of my wishes, and those of [George P. Putnam], I am constantly referred to as 'Mrs. Putnam' when the Times mentions me in its columns," she wrote.

The aviator went on to note that it would be convenient for both her and the Times to call her Amelia Earhart. She wrote that she had "no principle to uphold" with her request, suggesting that it was more a matter of a woman's right to a stage name, so to speak, than an outright feminist statement. "After all... I believe flyers should be permitted the same privileges as writers or actresses," she added.

Apparently, the Times had referred to her as "Mrs. Putnam" even in the headline announcing her record-breaking solo flight across the Atlantic Ocean in 1932. Fortunately, her letter to the publisher worked. By July, she was "Miss Earhart" in the Times headlines once again, although she still had to remind other journalists to use her flying name. In June that same year, the Times reported that she told a waiting crowd in Chicago that "women in aviation should have the same privileges as women who write."

On the flip side, she considered her husband's name "grand" for social occasions — the Putnams were a famous book publishing family in New York.

These days, the focus is less on Earhart's life and more on the mysterious circumstances of her disappearance in 1937. Theories about her death are still formed and discarded even in 2017. In early July, an upcoming documentary claimed to have found a photograph suggesting that Earhart and her navigator, Fred Noonan, were captured by the Japanese military after crash landing over the Pacific during their ill-fated trip around the world.

It was an interesting theory while it lasted, but a blogger quickly pointed out that the photograph was actually published two years before Earhart's disappearance. The existence of the theory, however, shows how fascinating people still find Earhart's death. If the Times letter is any indication, though, it may be time to concentrate on her extraordinary life, too.

More like this
Chelsea Clinton On The Best Advice She Ever Got From Her Mom
By Brianna Kovan
5 Ways To Help People Impacted By Hurricane Ian In Cuba & Florida
By Emma Carey
Constance Wu On Self-Doubt, Family Drama, & Her Sister's Unwavering Support
By Constance Wu
Holly Willoughby & Phillip Schofield #Queuegate Drama, Explained
By Sophie McEvoy
Get Even More From Bustle — Sign Up For The Newsletter