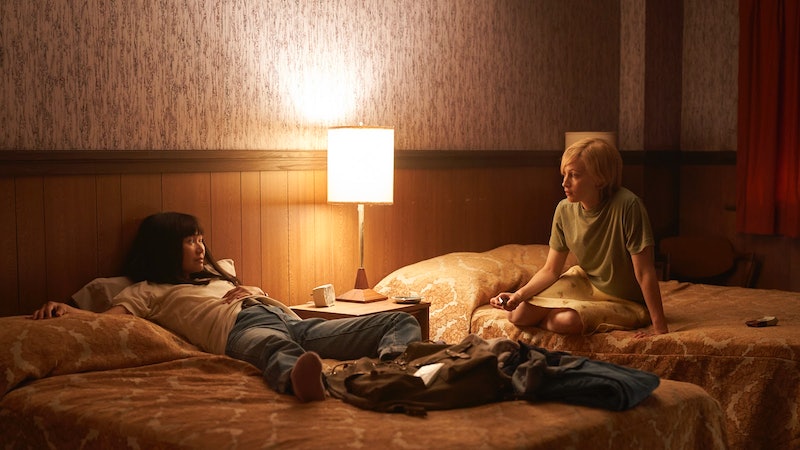 The kidnapping of billionaire heiress Patricia Hearst was one of the most shocking, well-covered stories of the '70s. It's been the topic of several articles, books, and documentaries — all trying to uncover what had actually happened when Hearst was abducted by the domestic terrorist group SLA (Symbionese Liberation Army), only to resurface later as an advocate for their cause and often pointed to as a high-profile case of Stockholm syndrome. But with all the media attention directed towards the dramatic story of a rich, white girl getting involved with a radical group, another part of the narrative was totally ignored: Wendy Yoshimura's narrative. American Woman, which premiered at the Tribeca Film Festival this year, gives a voice to this Asian-American woman whom history has largely overlooked despite her involvement in the turbulent events of 1974 by centering the story on a fictionalized version of her named Jenny (Hong Chau).

"I thought it was going to be approached one way, and then I read the script and I saw that the story was really about Jenny, and really about a true period in time in which no one bothered to even ask what happened," says Sarah Gadon, who plays Pauline, when we sit down at the Roxy Hotel in New York City. "Reading [the novel American Woman], I was just completely captivated by Jenny's character and the journey that she's on, and how these two women whose lives or paths would have never crossed did."

Based on the Pulitzer-nominated novel by Susan Choi, American Woman is a piece of historical fiction based on Hearst's kidnapping. It looks through the events through the eyes of Jenny Shimada, a former radical activist who now tries her best to keep her head down and assimilate back into society. But she gets roped back her past when she is tasked by an old comrade to care for three fugitives, one of whom is Pauline, the granddaughter of a huge newspaper magnate — Hearst's avatar.

Patty Hearst was kidnapped from her home in Berkeley, California on Feb. 4, 1974 by the SLA, per CNN. According to the FBI, the group invaded her apartment, grabbed the nineteen-year-old, beat up her fiancé, threw her in the trunk of their car, and drove off. On April 3, the world was shocked to hear a tape released by the SLA wherein Hearst can be heard saying that she’d joined their fight to free the oppressed.

Per the Times, Hearst was convicted of armed bank robbery in 1976, despite claiming that she had been coerced into participating in the SLA's siege of a San Franciso bank in 1974. Hearst was carrying an assault rifle during the robbery. Because of this, she was sentenced to seven years in prison, per the FBI.

As much as the saga has been covered, not many specific details are known about the nature of the real Yoshimura and Hearst's relationship, or even how they actually met. In a 1979 New York Times article, Yoshimura is referred to as "Patricia Hearst's former roommate and traveling companion," and in another Times piece, she is said to have only become Hearst's companion after Hearst went into hiding. The FBI arrested them both in September of 1975 in the apartment they shared in San Francisco.

As documented by the Times, Yoshimura was convicted of "unlawful possession of explosives, a machine gun and materials for making bombs" in 1977. In her book Every Secret Thing, Hearst claimed that Yoshimura was the group's "explosives expert," and that she taught other SLA members how to make pipe bombs. The Japanese-American database Densho Encyclopedia says that Yoshimura was sentenced to up to 15 years in prison, but was released on parole in September 1980.

Per The Washington Post, President Jimmy Carter commuted Hearst's sentence in 1979. In 2001, per The Guardian, Hearst was completely pardoned by Bill Clinton. She embarked on a career as a published author and actor. Meanwhile, the last update on Yoshimura's whereabouts are from 2003. SFGate reports that she now lives a quiet life with her dog, and makes a living as a watercolor artist.

In the fictionalized storyline we follow in the movie, before Jenny even begins her fugitive babysitting job she already knows of — and is intrigued by — Pauline and her story. And the moment they meet at the farmhouse, they have an immediate, and absolutely magnetic connection that shines even through in their silent stares.

"In some ways, [our characters were] probably the least crazy people who didn't lose our sh*t," laughs Chau. "Even though [Pauline] comes from a lot of privilege, there was never [from Jenny] this condescension towards her, this extreme judgment. It's really just taking her for her humanity." Gadon agrees, "[Jenny's] really the only person that sees Pauline at face value, which is as a woman maybe in captivity, trying to understand what that situation is."

According to Chau, it took around 10 years for director Semi Chellas to execute her vision for this film. While filmmaking doesn't happen quickly and long gestational periods are fairly common, the actors believe that there were also biases at work.

"[The difficulty] stemmed from people not really wanting her to make this movie with two female leads, and one of them is an Asian person," Chau says. "It's not the salacious version of this story," Gadon adds.

It was Hearst's story that was headline-worthy, according to the media, because she was a well-known heiress. The mystery that surrounded her kidnapping and the alleged abuse and brainwashing behind her sudden change in ideology fascinated people. Yoshimura remains in the shadows until this day.

But the two actors are glad that Chellas stuck to her — and her friend writer Susan Choi's — version of the narrative. Gadon says, "It's just really cool when you're able to be a part of people's passion projects. It's the best way to make an independent film." Chau continues, "I'm just so grateful that Semi is who she is, and she has a strength of character where she was uncompromising and didn't change the story to make it more marketable."

By looking at the historical moment through Jenny's perspective, American Woman refuses to erase another person of color's narrative to service a privileged white person's story. The film shows just how intertwined the two women's stories are, explores their relationship and how they escaped from their former comrades, abandoning the same extremely radical ideology. The characters form a bond that they both need in order to survive the time leading up to their FBI arrest — not only physically, but emotionally and mentally.

"[By the end] of the movie when they're living together — it feels like they're sharing a political life together as well, where they have the same values and are believing in the same advancement for women," says Gadon.

"It's one of those situations where it's like, 'Well why couldn't any two people be together? What's so weird about that?' I think a lot of times, even when you just see romantic couples, like two people you wouldn't think would be dating or would be together and think, 'What's the commonality there? What do they talk about?' Well, same thing anybody else talks about!" Chau laughs, "They smoke cigarettes, get coffee, drive."

Gadon says that at, the end of the day, she just wants audiences to come out of the movie hungry to learn more about Wendy Yoshimura. Chau's hopes are even more simply put: "I hope that people realize that Asian people existed in the '70s in America."

More like this
Women Around The World Are Cutting Their Hair In Solidarity With Mahsa Amini
By Darshita Goyal
These 25 International Horror Movies On Netflix Prove Fear Is A Universal Language
By Bustle Editors
Harry Lawtey Is Weighing Up The Price Of Success
By Olivia-Anne Cleary
Mike Flanagan Teases 'The Midnight Club' In This Exclusive, Creepy Clip
By Grace Wehniainen
Get Even More From Bustle — Sign Up For The Newsletter