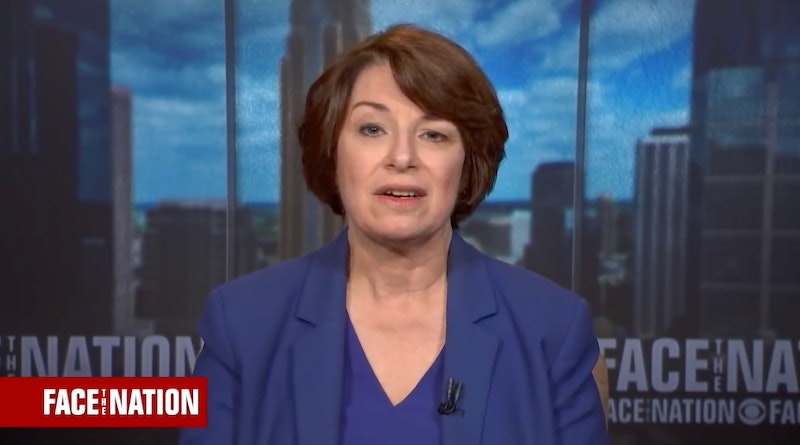 In an interview with Face The Nation on Sunday, Democratic Minnesota Sen. Amy Klobuchar called out Brett Kavanaugh for not answering her questions about his drinking habits.

When Face the Nation host John Dickerson asked Klobuchar what she expected to get out of the FBI investigation into Christine Blasey Ford's allegations of sexual assault against Kavanaugh, she said an investigation is the ultimate way to show respect for Ford's testimony last week. (Kavanaugh has denied all allegations, and Bustle has reached out for comment via the White House.)

"I think it's really important that the FBI get to the bottom of the evidence here because what happened in that hearing was that a number of my colleagues on the other side of the aisle said that they respected Dr. Ford, that they thought she had dignity, that they found her testimony compelling. Well, you don't respect her if you don't try to figure out what actually happened," Klobuchar said. "And so that's why I was so pleased when Sen. [Jeff] Flake rose to the occasion and said it was beneath the dignity of the Senate and beneath the dignity of the court, basically, if you don't follow up."

The FBI investigation — which will only delay a vote on Kavanaugh's nomination to the Supreme Court by a week — will have limits, according to news reports.

The New York Times reported on Saturday that only four people will be interviewed for this background check, as opposed to a criminal investigation. That list of people does not include former classmates who tell different stories about Kavanaugh's drinking habits as a student, the Times reported.

During his testimony, Kavanaugh failed to answer Klobuchar's questions about his drinking, instead turning the question back onto the Democratic senator after she described her father's alcoholism. She asked if Kavanaugh had ever drank so much that he blacked out. Kavanaugh responded, "You're asking about blackout, I don't know, have you?"

Again, Klobuchar asked him to respond to her question. "Could you answer the question, Judge? So, you have, that's not happened? Is that your answer?"

To which Kavanaugh responded, "Yeah, and I'm curious if you have." Kavanaugh apologized later on in the hearing.

Klobuchar said she still believes his drinking is relevant to the allegations. "I think that is relevant because when I was asking him about whether or not he had blacked out, or maybe partially blacked out in the past because of excessive drinking, he just turned it back on me instead of really answering that question," she told Dickerson. "And the reason it's relevant is perhaps he doesn't remember what happened because there were repeated incidences of this excessive drinking."

But Klobuchar said the Senate and the White House shouldn't be "micromanaging the FBI investigation."

The Minnesota senior senator also gave Flake credit for asking for an investigation. "At least he asked for it, unlike some of my colleagues that just thought they should march ahead when a woman was telling her story," Klobuchar said.

Klobuchar also stressed that Kavanaugh's hearings were part of a job interview — not a criminal investigation. "Of course he has a right to defend himself but this isn't a criminal trial," Klobuchar said. "This is a job interview for the highest court in the land and my colleagues who are still undecided — that's not me — but my colleagues who are undecided are going to have to evaluate that temperament and evaluate his decisions from the past, which I think are extreme when it comes to presidential power."