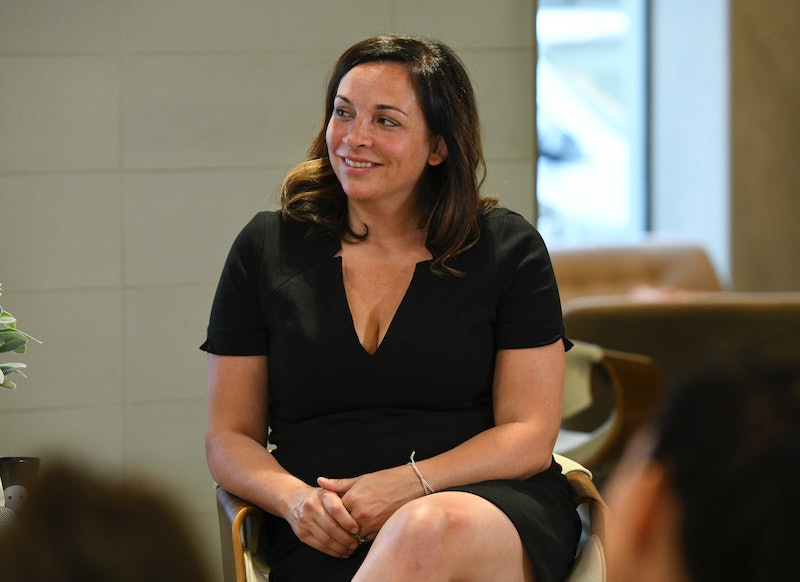 After a demanding and high-stress career, most people’s second acts likely involve something a little more relaxing, something a little closer to home. But for Amy Nelson, who co-founded the co-working space The Riveter as a pregnant 37-year-old mother of two after working tirelessly in her fruitful finance career, the easy path was nowhere near where she wanted to be.

“My whole life is tied up in this and I don't mean that in a bad way,” she says. “I have taken on this idea and this dream and this movement and said I'm going to make it happen from nothing. And that is a huge and heavy lift and I'm emotionally tied to it, and that is very different from having a job. It doesn't ever really leave you.”

The mother of two is using her “break” from a busy day of meetings after arriving in New York on the red-eye from her homebase in Seattle to speak to me, a journalist interrupting her sushi dinner to ask her to explain the ins and outs of her mega successful business. (Her tip for making this impossible day possible? She starts the day out with a blowout at Dry Bar.)

But a little morning pick-me up for her ‘do aside, Nelson is also driven by a pretty powerful mission: democratizing the world of co-working spaces. While the industry grew thanks to male-owned companies like WeWork and Rocketspace, female-owned companies like women-only co-working space The Wing have begun to break into the industry as well. Like The Wing, Nelson’s venture offers events and community services, but The Riveter also makes a few other twists on that model by opening its spaces to all genders and by offering diverse plans ranging from $99 dollars a month for 10 hours of access to $375 for a full month, and not requiring members to sign up for a full year. “I think that price point for a full year can seem unattainable or be unattainable to some people. So we talk about democratizing access,” she explains.

For Nelson, however, that democratization isn’t just about the price tag or the composition of the folks working alongside each other — it’s also about where these spaces actually exist. While co-working spaces are booming on the coasts — The Riveter itself began in Seattle before expanding to Los Angeles — Nelson is determined to build the company’s next series of locations in flyover states. Possible locations include Dallas, Phoenix, Minneapolis, and Atlanta.

“I wanted [The Riveter] to be something that would work all over the country and that's really informed how we built it in this model of inclusivity and thinking about the woman who lives in Indianapolis as well as the woman who lives in Los Angeles and what are their needs and what was the conversation they want to have? What kind of space do they want?” says Nelson, who grew-up in the “flyover state” of Ohio, where she was taught, from a young age, to “come to my own opinion and listen to all sides of an issue” as a result of Ohio’s rather divided political landscape. “There are so many women in the middle of the country doing so many amazing things and sometimes I think that their voices aren't heard as much as we have our voices heard on the coasts.”

It makes sense that sticking up for the states that often get left out is important to Nelson. After all, the entire point of founding The Riveter was because she wanted to find somewhere that felt like hers after years of working in male-dominated offices. “I think belonging is really powerful and I had been in corporate America for a decade and never quite felt like I belonged,” she says.

Of course, when she first started building The Riveter, that sense of belonging wasn’t immediate. The company needed funding, and despite many cracks in the glass ceiling, VC funding is still a man’s world. In 2017, women founders received only 2 percent of VC funding according to a 2018 study, something Nelson attributes to the lack of female venture capitalists (as of December 2017, less than 10 percent were women).

“Talking about gender bias can be hard for successful women. In my twenties, I worked on Wall Street and I was succeeding in spaces built by and for men where I was often the only woman, so I think you might try to convince yourself that gender bias doesn't exist or that you can get past it, but the thing is it's real and it's there and it's pervasive,” she says. And after raising over $20 million for The Riveter, it certainly seems as though the company has busted the notion that women have trouble getting investors to sign on for their startups. The problem is that Nelson is the exception, not the rule — and she was nowhere near certain her pitch would ever yield an investment.

“I went out nervous about what being a woman would mean, and particularly being a woman in my late thirties with kids. I'm not a young ingenue,” she says, adding that she worried the concept of The Riveter wouldn’t resonate in pitch meetings “because not many of the investors I spoke to shared my lived experience.” Luckily, she was wrong, but that’s not the case for most female founders (that 2 percent stat doesn’t lie) and that reality only strengthens Nelson’s resolve to offer a space and a community that encourages women to keep working to change the numbers.

“My hope is that we can give someone else hope that they can do it too. That's super important. You can't be what you don't see,” she says. “I thought about that a lot when I started The Riveter. I wanted to see more women doing this because I wanted to talk to them, so I hope that we are kind of leading alongside our members by example in terms of raising money to grow companies.”

And when she’s not leading by example at work, Nelson is doing her part to inspire the next generation to be what they see. Her young daughters may not know what VC funding or a co-working space even is, but they do know what their mom is up to.

“They know that mommy has a company and I go to work and then I have to travel sometimes. They know I'm trying to make the world better for girls and moms. They play work, play that they're going to work or getting on the airplane,” Nelson says, with a laugh that is equal parts proud and tickled. “The fact that we have a two parent, two intense career home, they don't think that that's out of any sort of norm. That's their normal. It's all they know. And I think that's remarkable.”

More like this
24 History-Making Black Women You Probably Didn't Learn About In School
By Ayana Lage and JR Thorpe
25 Inspiring Quotes From Black Women To Celebrate Black History Month
By Kyli Rodriguez-Cayro and JR Thorpe
These Are The Fastest Electric Kettles You Can Buy
By Margeaux Baulch Klein
Twitter Has *A Lot* To Say About The "Single Penalty”
By Sam Ramsden
Get Even More From Bustle — Sign Up For The Newsletter
From hair trends to relationship advice, our daily newsletter has everything you need to sound like a person who’s on TikTok, even if you aren’t.