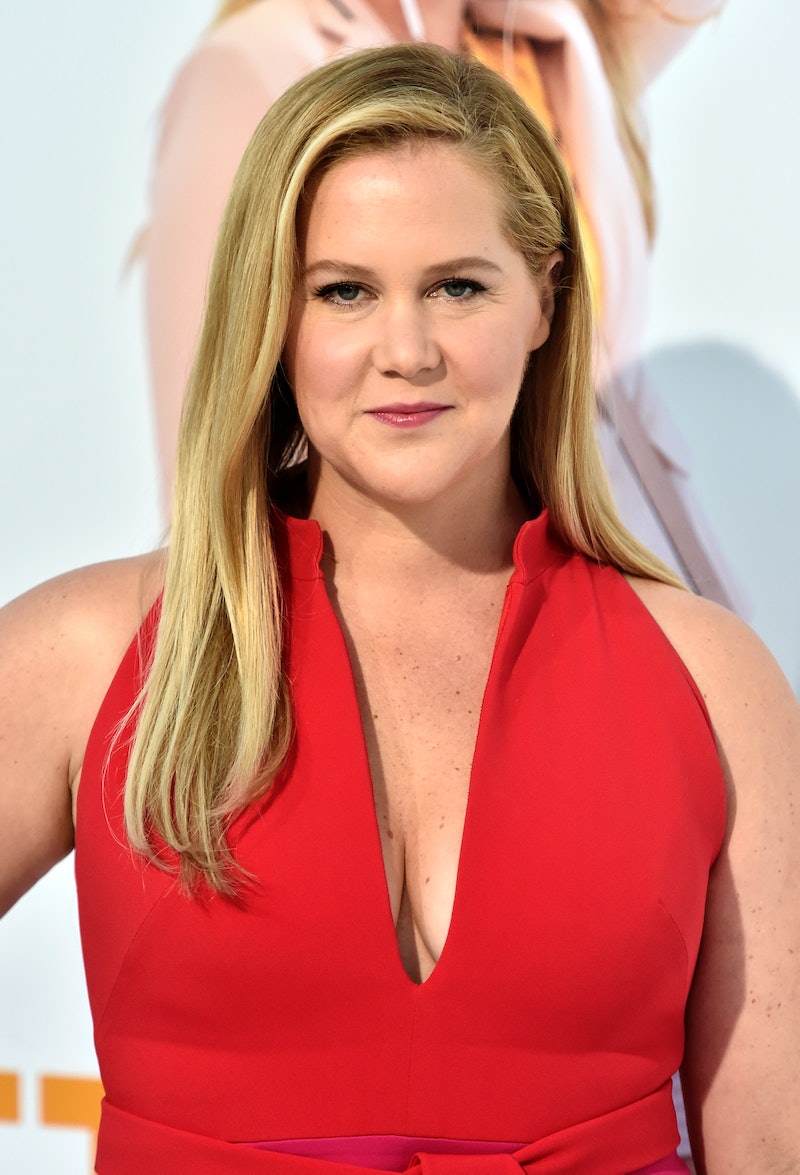 After welcoming her first child into the world on Sunday, May 5, Amy Schumer's baby name has finally been revealed. On Tuesday night, May 7, the comedian announced that she named her child Gene Attell Fischer, and after what sounded like a truly difficult pregnancy, it seems like she and husband Chris Fischer are enjoying their time with their new son.

Alongside an Instagram photo of the baby in his dad's arms, Schumer wrote in the caption, "Gene Attell Fischer And his dad Chris." A whole range of celebrities commented on the post, sharing in the couple's excitement. Glenn Close wrote, "Congratulations, Amy! YOU DID IT! He is gorgeous. Sending love," while Ben Platt simply said, "GENE!!!!!!!!" Cindy Crawford added, "Better than the Met Ball! Congrats!"

While some people took to Twitter to wonder if Schumer was actually trolling everyone with the name announcement, others suggested a more heartfelt potential meaning. Some speculated that the baby's middle name "Attell" may be a tribute to Schumer's friend and fellow Long Island comedian Dave Attell, as pointed out by Newsday. That certainly could make sense, since as Yahoo News reported, Attell invited Schumer to perform with him in New York City back in January.

Although the exact meaning behind the newborn's name remains unknown, the announcement did give fans this adorable father-son photo. (Bustle reached out to Schumer's rep for confirmation of the child's name, but has not heard back.)

On Monday afternoon, Schumer announced her son had been born on Sunday night with an Instagram post referencing Meghan Markle's royal baby, which made total sense, being that she'd been making those references from the beginning of her pregnancy. Plus, Markle and Prince Harry's baby's birth coincided with the same day the Trainwreck star announced her son's.

Schumer posted a photo of herself in her hospital bed, her baby in her arms as Fischer kissed her on the forehead — a truly sweet moment. She wrote, "10:55 pm last night. Our royal baby was born."

As fans likely already know, Schumer remained incredibly open about her struggles in pregnancy, whether it was in her Netflix special, Growing, or speaking out about hyperemesis gravidarum, the condition that caused her to be hospitalized and cancel some of the performances on her comedy tour.

Last year, she shared a photo from her hospital bed, writing:

"I am in the hospital. I’m fine. Baby’s fine but everyone who says the 2nd trimester is better is not telling the full story. I’ve been even more ill this trimester. I have hyperemesis and it blows. Very lucky to be pregnant but this is some bullsh*t!"

After the journey it took to bring him into the world, it's good to see that the baby is finally here, safe and sound — and it definitely seems like his mom and dad are happy to be cuddling him. Hopefully, plenty of updates are on the way, and maybe when he gets older, he'll even inherit his mom's sense of humor.

More like this
Dixie D’Amelio & Noah Beck “Love Each Other” Despite Breakup Rumors
By Julia Emmanuele, Jordyn Tilchen and Grace Wehniainen
Hailey Bieber Just Responded To *That* Viral Met Gala Moment
By Radhika Menon and Sam Ramsden
Khloé Kardashian Is Reportedly Dating A Private Equity Investor She Met Through Kim
By Jordyn Tilchen and Jake Viswanath
The 'Love Island' Wedding Mystery That No One Saw Coming
By Darshita Goyal
Get Even More From Bustle — Sign Up For The Newsletter