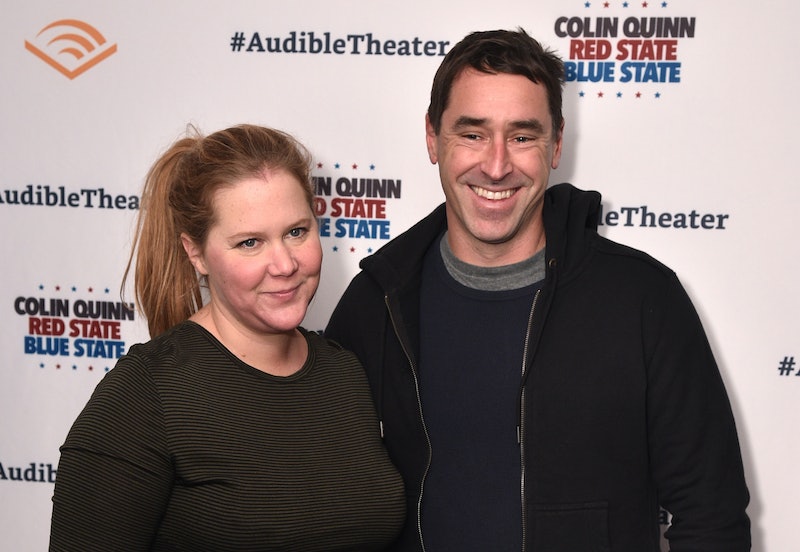 Throughout her pregnancy, Amy Schumer has been sharing updates about what the experience has been like, and her latest is a big one. Like the other times she's shared the bigger moments of this journey with fans, she used the milestone to draw attention to a cause close to her heart. In an Instagram post on Sunday, Schumer revealed she's having a boy, but she snuck the news into a post calling attention to the Fair Food Program, asking her fans to stand up for the rights of female farmworkers to protect them from being sexually assaulted in the fields.

In the photo she shared, Schumer and husband Chris Fischer are sitting in a pediatrician's office, surrounded by toys. She wrote:

"Hey! We love @chancetherapper and hate to be the ones to tell him that Wendys is the only fast food chain refusing to protect farmworker women from sexual assault and rape in the fields. This is true. Please read that sentence again. Message for the people in charge: Instead of spicy nuggets, we want food that is harvested with dignity NOT violence. Please join the @fairfoodprogram and #BoycottWendys link in my bio of how you can help. Also we are having a boy."

A rep for Wendy's provided the following statement to Bustle on Monday morning in response to Schumer's post:

"This is a complex issue, but be assured that we do not purchase the field grown product that the Fair Food Program covers. In fact, Wendy’s is proud to only purchase tomatoes from indoor hydroponic North American farms. We are excited about the superior quality of these tomatoes, and this move further strengthens our commitment to responsible sourcing practices by providing safe, indoor working conditions, shelter from the elements and environmental contaminants, reduced water and land use burdens, and a significantly reduced need for chemical pesticides. Further, all of our suppliers must adhere to our Supplier Code of Conduct which includes requirements related to human rights and labor practices."

Schumer's post comes after Chance The Rapper tweeted a "positive affirmation" that Wendy's would bring back Spicy Chicken Nuggets, to which the official Wendy's Twitter account responded that they'd bring the nuggets back if their tweet received 2 million likes.

According to The New York Times, chains like Walmart and McDonalds have signed on to the Fair Food Program, which means they buy produce like tomatoes for one to four cents more per pound, and in exchange, the growers agree to pay farmers the local minimum wage or more, and to hold themselves to a set of labor standards, particularly keeping them safe from sexual abuse at work.

So far, Wendy's hasn't joined the Fair Food Program. In March, Wendy's spokesperson Heidi Schauer told the Times that the fast food chain now buys all its tomatoes from indoor greenhouse farms mainly in the United States and Canada in order to "strengthen our commitment to treat people with respect.”

This isn't the first time that Schumer has used her platform to share updates about her pregnancy paired with statements about what matters most to her. When she and Fischer announced that they were expecting their first child, journalist Jessica Yellin was actually the one to share the news on her Instagram story, sharing a list of Schumer's favorite candidates in the 2018 midterm elections.

And when Schumer shared an ultrasound video last November, she used it as an opportunity to encourage people to vote in the election while also sharing a truly sweet moment with her fans.

It's exciting to hear that Schumer and Fischer are expecting a boy. After all of her updates so far, is it safe to assume that her baby's arrival will come with an equally epic announcement? Her due date should be coming up soon, so it won't be long until we find out.

Editor's Note: This post has been updated to include Wendy's statement.