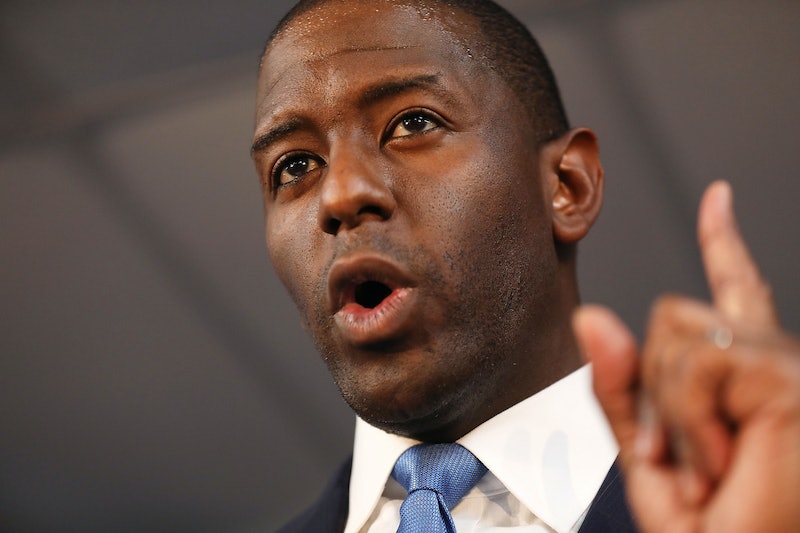 The winner of the Democratic nomination in the Florida governor's race made the rounds on political talk shows Sunday morning calling out "deeply regrettable" behavior and rhetoric that many have called racist. Andrew Gillum responded not only to racist robocalls but also his opponent in the governor's race — all as a part of his call not to "weaponize race" during the election campaign.

Just after winning the nomination, Gillum was faced with two situations that many of his supporters called racist. One was a set of robocalls sent to voters throughout Florida by an Idaho neo-Nazi group shortly after his win on Tuesday. The narrator of the recording was supposed to be Gillum, but spoke in an exaggerated dialect. The call also played monkey noises in the background.

Earlier this week, his opponent in the race, Rep. Ron DeSantis, a Republican, told voters not to "monkey this up" by electing Gillum. DeSantis has since clarified that the statement referred to Gillum's policies, not him as a person or his race. Bustle reached out to DeSantis' office for comment.

Speaking with CNN's Dana Bash on State of the Union, Gillum addressed both. Asked about the robocalls, Gillum focused first on DeSantis' comments. "Well, first of all, I have to tell you, I do find it deeply regrettable," Gillum told Bash. "I mean, on the day right after I secured the Democratic nomination, we had to deal with some of the dog whistles from my opponent."

Then came the most strongly argued part of his response. He told Bash:

We can have a challenge between ideas and around what we think the people of the state of Florida deserve ... What I don't want the race to turn into is a race of name-calling. I want to make sure that we don't racialize and, frankly, weaponize race as a part of the process, which is why I have called on my opponent to really work to rise above some of these things.

Although he focused his criticism on his opponent, he did not call DeSantis a racist while speaking on NBC's Meet the Press. The host, Chuck Todd, asked Gillum if his opponent was a racist.

"I have not called him a racist, but his rhetoric in my opinion has to be toned down," Gillum told Todd. "I won't get into the gutter and name call."

Gillum did, though, suggest that DeSantis was responsible not just for his actions but for those of others in the state and warned of the negative outcomes on CNN. "People are taking their cues from him, from his campaign and from [President] Donald Trump," Gillum told Bash. "And we saw in Charlottesville that that can lead to real, frankly dangerous, outcomes."

On Sunday, Gillum tried to focus most on the comment by DeSantis. But immediately after the robocalls, Geoff Burgan, Gillum's campaign's communications director, told the Tallahassee Democrat, "This is reprehensible — and could only have come from someone with intentions to fuel hatred and seek publicity. Please don’t give it undeserved attention."

Gillum's attempts to keep race out of the election may work — if DeSantis is allowed to control the messaging from the right. His campaign denounced the robocalls after the news broke.

"Hopefully whoever is behind this has to answer for this despicable action," DeSantis' communications director, Stephen Lawson, said in a statement provied to the Tallahassee Democrat. "Our campaign has and will continue to focus solely on the issues that Floridians care about and uniting our state as we continue to build on our success."

Officially, both sides claim the race should be fought over what Floridians "deserve" and "care about." Whether that happens, only time will tell.