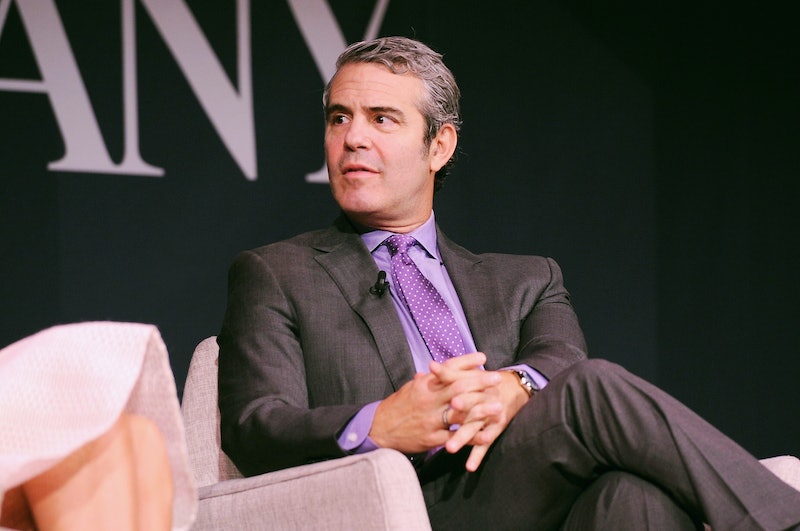 Watching women go on luxurious trips, throw extravagant parties, and yell at each other about inconsequential things might seem crazy to people who aren't fans of the Real Housewives franchise. But, those of us who are regular viewers know the true importance of watching women argue about whether it's appropriate to go commando at a cocktail party for an hour — getting to zone out and briefly clear our minds. It's just sometimes hard to put into words exactly why it's necessary to watch something like that when you're confronted by an eye roll-y roommate or significant other. Thankfully, Andy Cohen has our backs and has explained the comfort of Real Housewives expertly. (It's almost like he runs the show or something...)

Speaking with Planned Parenthood president Cecile Richards and Fast Company's Nicole Laporte in a conversation on pop culture and activism for the Fast Company Innovation Festival on Tuesday, Cohen explained why he thinks viewers enjoy the show so much, especially with how intense the news cycle has been these days.

"I am amazed by how this show actually… it comforts people," Cohen said. "I know this sounds crazy sometimes, chaos comforts people, because it takes you away from your own chaos that's going on in your life."

It's true. If fans can watch Ramona Singer and Bethenny Frankel argue over choosing rooms at a Mexican resort for a little while, it's a brief reprieve from everything else that's going on in the world. It's also, as Cohen pointed out, usually pretty easy to make sense of things on Real Housewives. In many of the dramatic run-ins on the show, someone is clearly in the right while someone else is in the wrong, making it much less complicated than situations we might be dealing with in our personal lives.

And the significance of the show, as well as Cohen's other show that often features Housewives, Watch What Happens Live, go beyond the pleasure fans get from just watching it. Cohen said that it can bridge the gap between people who might not have much else in common. "I've talked to a lot of people that have said, I have nothing to talk to my mother about, but this is the thing that we agree on," Cohen shared, before adding sarcastically, "So, you're welcome."

The show can also make connections for people in a different way. Explaining when and why he chooses to get political, Cohen said, "If something touches my heart, then I speak on it. I'm the only gay host on a late night television show ... If I'm someone's gay best friend in their head in Kansas who doesn't know any other gay people, then maybe I can change that person's mind."

Recently, one of the major ways Cohen's been speaking out about politics has been through his many tweets comparing the actions of Donald Trump to storylines from Real Housewives. For instance, in response to Trump's offensive comments about MSNBC's Mika Brzezinski, Cohen tweeted, "REAL HOUSEWIVES PLAYBOOK: accuse your co-star of a face lift. It's such a classic it recurs on Potomac in a couple weeks, and DC today!!" Cohen also called out the Republicans' attempt at a "skinny repeal" bill to repeal and replace Obamacare: "HOUSEWIVES PLAYBOOK: Set up cheater brand, piss off castmates (see: Skinnygirl/TipsyGirl on #RHONY)"

"I have used his insane Twitter feed as a way I can highlight how he is acting despicably or like a first season Real Housewife," Cohen said at the event. "And I don't want to demean the Real Housewives … just want to make that clear."

So, yes, while the Bravo shows can have some pretty ridiculous moments, they do have connections to the real world (remember when RHONY covered the 2016 election or when the ladies from RHOA went to the anniversary of the Million Man March?) and they, more often than not, let viewers relax and forget about their own problems and the garbage fire that is 2017. The next time someone gives you a hard time about your reality show obsession, just channel Andy Cohen and tell them the chaos comforts you.

More like this
Kourtney Kardashian Says She “Loves” The Changes To Her Body Caused By IVF
By Jake Viswanath
Kim Kardashian Reveals Her Response To Kanye’s Fashion Opinions
By Jake Viswanath
Kesha Is Down To Be The Next Bachelorette
By Jake Viswanath
The 'Love Is Blind' Season 3 Trailer Teases A Possible Fiancée Swap
By Kadin Burnett, Grace Wehniainen and Gabrielle Bondi
Get Even More From Bustle — Sign Up For The Newsletter