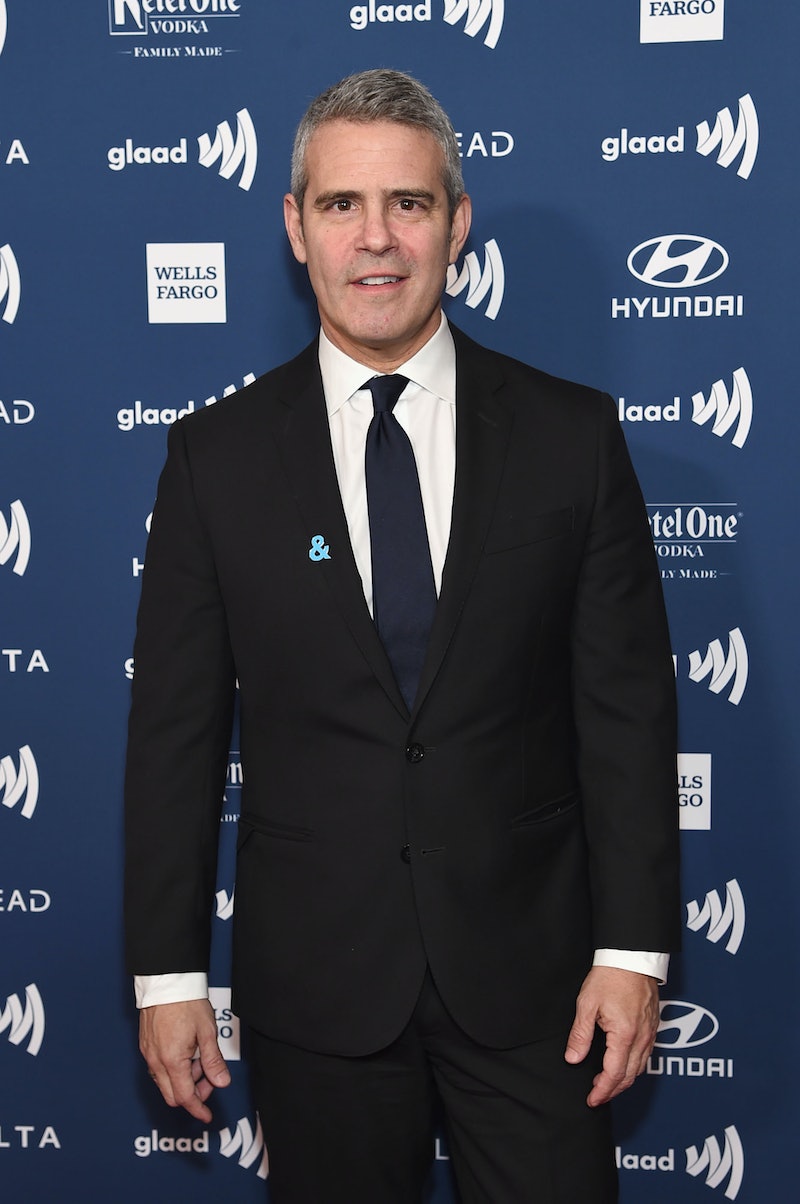 This late-night Bravo host is one lucky dad. Andy Cohen said Sarah Jessica Parker and Kelly Ripa give him great parenting advice. Seeing as both Parker and Ripa are two very important people in his life, aka his close friends, it makes sense why he would lean on them for help with his son, Benjamin Allen Cohen. Plus, they are also both moms to three children, so they definitely know a thing or two about parenthood.

While chatting with Us Weekly at the GLAAD Media Awards, where Cohen was presented with the Vito Russo Award for his LGBTQ activism as a media professional, he opened up about who's given him the best advice when it comes to being a father. Cohen said,

"Sarah Jessica, Kelly. I have a whole squad of moms around me who have just been incredible."

Both the former Sex and the City star and the Live With Kelly and Ryan cohost have been by Cohen's side since even before he welcomed his son via surrogate in February. After Benjamin's birth, Parker took to Instagram and wrote next to the same photo Cohen used to announce his son's arrival, "At long last. And February 4th will never be the same.We are already madly in love. Welcome Benjamin Allen Cohen we've got big plans for you. X,SJ."

Parker also previously discussed Cohen's journey as a father. She gushed to Us Weekly in April, "He’s a wonderful dad. He's a better dad than I even think I thought he could ever be. … It’s real and he’s living up to all of our best expectations."

As for Ripa, well, as you can see below, she's in love with Benjamin. Next to two Instagram photos of herself with him in late February, she wrote, "Deeply in love [four red heart emojis] thank you @bravoandy for bringing such joy to the world."

The daytime talk show host also once became emotional when talking about Cohen as a dad. During an episode of Live With Kelly and Ryan in early February, Ripa said, "I was honored to practically be in the delivery room, on the phone with my friend, Bruce Bozzi, who was actually in the delivery room." She continued, "[Andy] named the baby after his grandfather, Ben Allen. He's obviously over the moon, he's in love."

She even called Cohen a "surrogate dad" to her own children with husband, Mark Consuelos, and also added,

As you can see above, Ripa, Parker, and other friends of Cohen also threw him a baby shower at the end of January. Based on his caption, he was overjoyed by the celebration. "I had a heart-boner for days after this crew threw me an equally epic affair on the East Coast," he wrote next to the Instagram. "I feel loved & it’s all going to the [baby emoji]. Thank you @brucebozzi @kellyripa @sarahjessicaparker @jackie__greenberg. (Worth noting that Anderson [Cooper] made the ribbon hat and did a beautiful job!)"

It's no wonder Cohen goes to Parker and Ripa for parenting advice. The love and support he's received from them is truly beautiful. He's probably extremely grateful that he can go to them not only as a friend, but also as a new father.

More like this
Who Is Nick Cannon Dating & How Many Kids Does He Have?
By Jordyn Tilchen and Radhika Menon
Is Dua Lipa Dating Trevor Noah? New Photos Show Them Kissing & Hugging
By Brian Anthony Hernandez and Martha Sorren
What Is Miles Teller’s Net Worth? The 'SNL' Host's Bank Account Is No Joke
By Meg Walters
Everything To Know About Taylor Swift’s 10th Studio Album, 'Midnights'
By Grace Wehniainen and Jake Viswanath
Get Even More From Bustle — Sign Up For The Newsletter