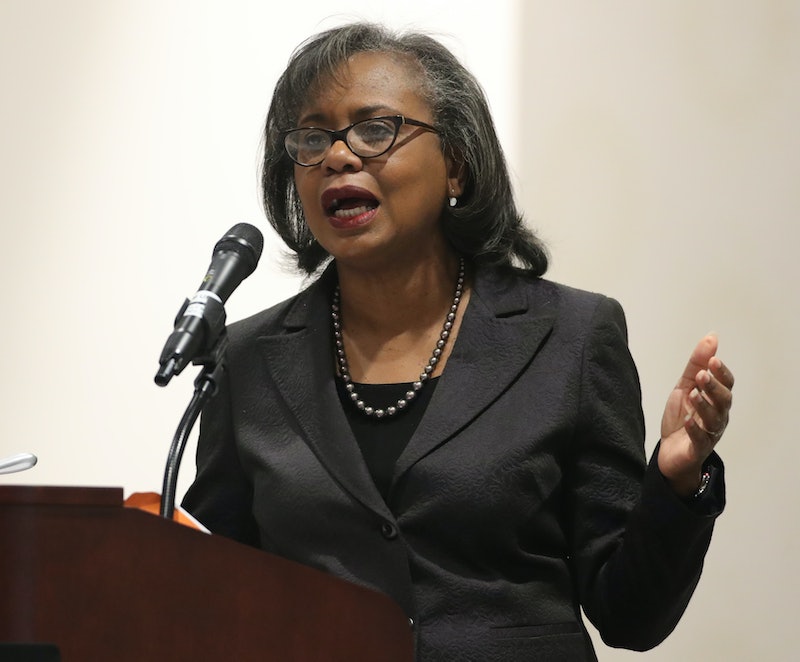 More than 25 years before Christine Blasey Ford testified against Brett Kavanaugh, Anita Hill appeared before the Senate Judiciary Committee and accused another Supreme Court nominee — Clarence Thomas — of sexual harassment. Like Kavanaugh, Thomas denied the allegation against him. Thomas was ultimately confirmed to the Supreme Court and is still a justice, but Hill has not forgotten her experience, and she has expressed support for Ford. Hill also remarked that Kavanaugh's apparent anger during his testimony was a clear illustration of power.

Kavanaugh “was able to express a real anger, an aggression, as well as a lot of emotion” during Thursday's hearing, Hill said during a gathering in Houston on Friday. She added that no woman nominated to the Supreme Court “would ever have the license to express [herself] in that way.”

“We still have so far to go in terms of the power that he had and the license that he had,” Hill said. “We still don’t allow women to cry or to be angry.”

As the Associated Press pointed out, Ford's allegation and testimony against Kavanaugh were highly reminiscent of Hill's experience in 1991. Hill, then a law professor at the University of Oklahoma, alleged that Thomas had made unwanted sexual advances and lewd remarks while he was her employer.

Although the allegations in both cases were different, Hill offered her support to Ford, per The New York Times. When she was asked what advice she would give Ford moving forward, Hill urged her to remain true to herself.

“Don’t do anything that will dehumanize you or cause you pain or trauma,” Hill said Friday, speaking to a gathering of young professional women in Houston. “Be authentic and do what feels right to you.”

Hill also pointed out that Ford's "calm" demeanor presented a stark contrast to Kavanaugh's "anger" and "aggression." She said during her speech that she had tried to keep an open mind while watching both Ford and Kavanaugh's testimonies, but that she ultimately believed Ford.

“I was struck by the doctor’s openness to say how terrified she was to be there and talk about something that had had a profound impact, and knowing there would be hostility,” Hill said. “I was also impressed by how calm she was, how careful she was and how it affected her.”

According to The New York Times, three of the senators who heard Hill's testimony back in 1991 are still on the Senate Judiciary Committee, and two of them have been supporting Kavanaugh — just like they did with Thomas. But Hill believes that the United States has changed in the 27 years since she presented her allegation against Thomas.

In light of the #MeToo movement, Hill suggested that there is a greater understanding of sexual misconduct and gender dynamics across the country today than there was when she testified. She noted that more survivors have been coming forward with their experiences, and holding powerful men accountable in the process.

“We are not alone, she is not alone,” Hill said of Ford.

Following the Senate Judiciary Committee vote on Friday, Donald Trump announced that he had "ordered the FBI to conduct a supplemental investigation to update Judge Kavanaugh's file." According to CNN, this means that the full Senate will not be able to vote on Kavanaugh's confirmation early next week, as they were originally slated to do.