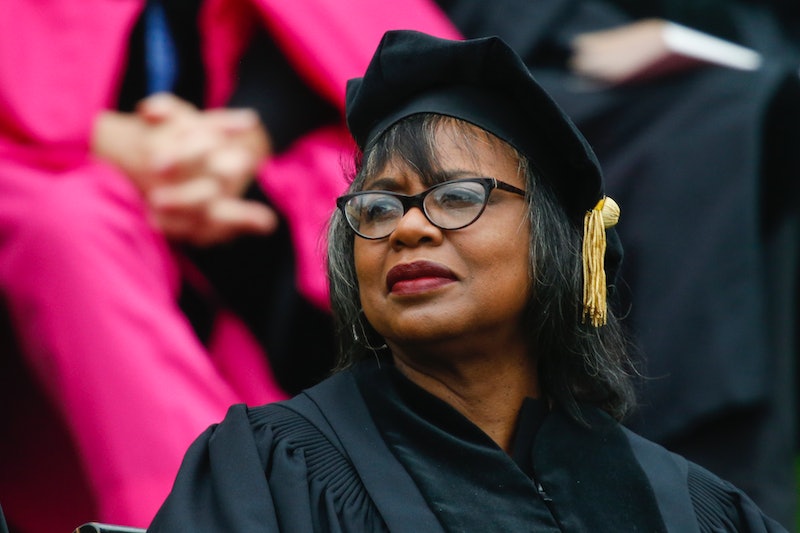 No one in America knows what Christine Blasey Ford, the woman who has accused Supreme Court nominee Brett Kavanaugh of having attempted to sexually assault her when they were both in high school, is going through. No one, perhaps, except Professor Anita Hill. Now, Anita Hill's advice for handing the Kavanaugh allegations in the Senate Judiciary Committee offer a unique perspective that, really, could only come from her.

"There is no way to redo 1991, but there are ways to do better," Hill wrote at the beginning of her op-ed for the New York Times. In the piece, Hill doesn't explicitly revisit her experience testifying in front of the Senate during the confirmation hearings of current Supreme Court Justice Clarence Thomas — but she does use that experience to offer a set of recommendations on how the Senate could approach the upcoming hearing regarding the allegation against Kavanaugh (which Kavanaugh has categorically denied).

"With the current heightened awareness of sexual violence comes heightened accountability for our representatives," Hill wrote in the Times, after referring to the #MeToo movement and the fact that the Senate still hasn't put a protocol in place for properly addressing sexual harassment and assault claims. "To do better, the 2018 Senate Judiciary Committee must demonstrate a clear understanding that sexual violence is a social reality to which elected representatives must respond."

In her piece, then, Hill laid out a series of recommendations, or what she calls "basic ground rules," for how the Senate could move forward in addressing the allegation against Kavanaugh. The first of these ground rules is to "refrain from pitting the public interest in confronting sexual harassment against the need for a fair confirmation hearing," a call that directly addresses something that went wrong in the hearings that she testified in. According to the Huffington Post, then-chair of the Senate Judiciary Committee Joe Biden was under pressure from Republicans to give Thomas a "fair" hearing, and that meant refraining from giving full credence to Hill's story and the evidence that could have backed it up.

"Our interest in the integrity of the Supreme Court and in eliminating sexual misconduct, especially in our public institutions, are entirely compatible," Hill wrote in the Times.

Hill's second piece of advice calls for a "neutral investigative body with experience in sexual misconduct" to look into the incident, because, as she wrote, such groups — and the conclusions they come to — tend to be "more reliable and less likely to be perceived as tainted by partisanship." Hill herself, according to the Huffington Post, was instead subjected to invasive and embarrassing lines of questioning from senators on both sides of the aisle, although some Republican senators in particular were particularly skeptical of her claims.

She then went on to call for the Senate not to rush the hearings, a call that, in her mind, is likely to go unanswered. Kavanaugh and Ford are both scheduled to testify on Monday, a timeframe which Hill called "discouraging."

Hill closed her op-ed with the most personal appeal in the piece, even though it was just phrased as a general suggestion.

"Finally, refer to Christine Blasey Ford by her name. She was once anonymous, but no longer is," Hill wrote. "Dr. Blasey is not simply 'Judge Kavanaugh’s accuser.' Dr. Blasey is a human being with a life of her own. She deserves the respect of being addressed and treated as a whole person.