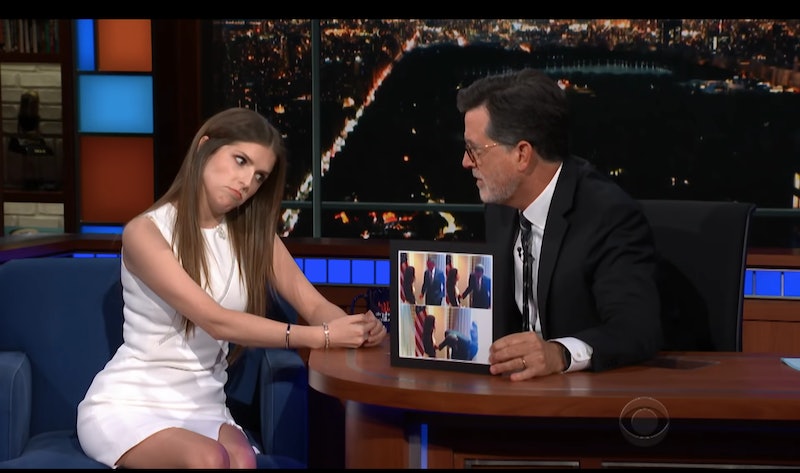 The Late Show with Stephen Colbert

On the Late Show with Stephen Colbert on Sunday, a Hollywood actress shared a hilarious story about her first encounter with the 44th president. Anna Kendrick cursed at Obama when they met, prompting a pretty amazing reaction from the former president.

Colbert first brought up the topic by showing Kendrick a copy of her own Instagram post from 2013. The post featured three snapshots from Kendrick's 2012 meeting with Obama and, in the final shot, the former president is bent over with laughter. Colbert asked Kendrick what she did to make the president laugh — and the actress shared some pretty amusing details.

As Kendrick described, at a campaign event in Los Angeles, Obama mentioned her name and one of her films, Up in the Air, during a speech he was giving at the time. When Kendrick met Obama one-on-one following the former president's remarks, Obama said to her, "I hope I didn't embarrass you earlier." In response, Kendrick quipped, "Yeah, you're such an *sshole." Kendrick then added that her comment, coupled with the fact she berated Obama for not knowing that people from Maine have a reputation for being punctual, is what made the then-president chuckle hysterically. As Kendrick put it,

So I called him an *sshole and scolded him for not knowing enough about the fifty states. So, that was what made him double over with laughter, yay!

In response, an amused-looking Colbert asked Kendrick if she had met with the former president since that interaction. Kendrick enthusiastically replied that she had, noting that she went to the Kennedy Center Honors and was also selected to sing at Christmas in Washington where she "met his [Obama's] whole family."

Colbert then asked Kendrick what she sang at the Christmas in Washington event, and the actress responded that she performed "Have Yourself a Merry Little Christmas." She also commented that the song was an obvious choice for her, saying, "... Because of course you sing 'Have Yourself a Merry Little Christmas.' If you're gonna sing for the president, you're gonna sing Judy Garland, am I right?" In response, the late night host joked, "I take your word for it. I've never sung for the president before."

The rest of Kendrick's interview with Colbert deviated from the topic of Obama and focused on her new movie, A Simple Favor, as well as her first-ever meeting with Beyoncé. In referencing the Beyoncé meeting, however, the actress joked that it held more significance for her than did her meeting with the 44th president. "I know you've met the president and that is stunning, but I also understand you had the chance to meet Beyoncé?" Colbert asked Kendrick. "Much more important [than the Obama meeting], yes," Kendrick shot back.

Overall, Kendrick's hilarious story about meeting Obama (and cursing at him) offered some belated and amusing context to her 2013 Instagram post capturing the incident. At the time, Kendrick wrote, "Last year. The coolest three seconds of my life. (What can I say? I'm hilarious)." It's pretty clear that Obama seemed to concur with Kendrick's assessment.