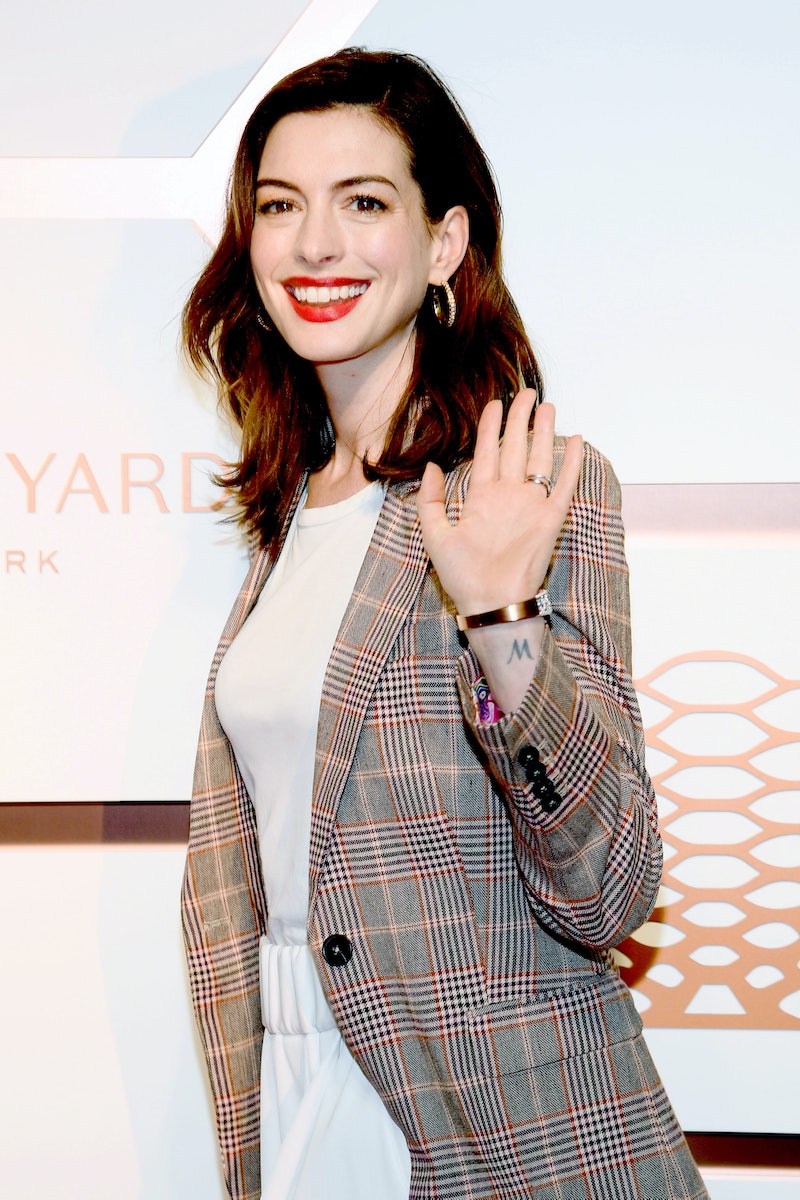 We all dream what it would be like to meet our idol and on Tuesday night Anne Hathaway got to see that dream become a reality thanks to a little assist from Stephen Colbert. While visiting The Late Show this week, the late night host orchestrated a little surprise for his honored guest by having RuPaul come up on stage to meet his No. 1 fan. And needless to say, Anne Hathaway's reaction to meeting RuPaul is the ultimate definition of pure joy and will make you love her even more than you already do.

Hathaway has been making the usual late night rounds while out promoting her upcoming movie The Hustle, which she stars in alongside Rebel Wilson. However, she had no idea she'd have the opportunity to meet her hero along the way and the interaction appeared to be everything she ever wanted it to be and so much more. In fact, Hathaway even broke down in tears when he first came out to greet her and give her a hug. And to make the moment even sweet, Ru went on to proclaim Hathaway as being “the winner of this week’s challenge,” and topped it off by telling her: “Shantay, you stay!”

Of course, being the superfan that she is, Hathaway couldn't stop herself from talking to Ru about RuPaul's Drag Race and how much the series has meant to her for all of these years. She admitted that Monét X Change, the champion from RuPaul’s Drag Race All-Stars 4 in particular will always hold a special place in her heart.

“How amazing she was in season 10! I’m really taking it very seriously,” Hathaway stated. “And then the growth between season 10 and [All-Stars 4] and the way she stepped her p—- up! She’s killing it. I feel like, since I started being an actress, I’ve learned how to step my p—- up!”

Between the passion in her voice and the tears in her eyes, it was clear that this show has truly meant a lot to Hathaway and this is a moment she won't soon forget. And it seemed the feeling was mutual for Ru, who was equal parts flattered and amused by Hathaway's love for the show. And honestly, the way that she was completely gushing over Ru and Monét is just so relatable. Who hasn't wanted to talk to their favorite celebs about the work they've done that's made an impact on your life? Hathaway got that opportunity, so you better believe she took the chance and ran with it.

Needless to say, there's now just one more thing that needs to happen to make this friendship complete. Hathaway needs to appear on an episode of RuPaul's Drag Race so that we can truly see her fangirl out on set. Either that or these two need to star in a movie together ASAP. (Would watch the heck out of that movie, TBH.)

Regardless, if you're in need of a little pick-me-up this week, watching Ru and Hathaway's friendship bloom should certainly do the trick.

More like this
Where Is Armie Hammer’s Ex-Wife Elizabeth Chambers Now After 'House Of Hammer'?
By Grace Wehniainen and Radhika Menon
Confusion Reigns After Kanye Changes His Instagram Profile Pic To Kris Jenner
By Jake Viswanath
Tristan Thompson Proposed To Khloé Kardashian & She Said No
By Jake Viswanath
Kylie Jenner Goes Into Labor & Welcomes Her Baby On 'The Kardashians'
By Jake Viswanath
Get Even More From Bustle — Sign Up For The Newsletter