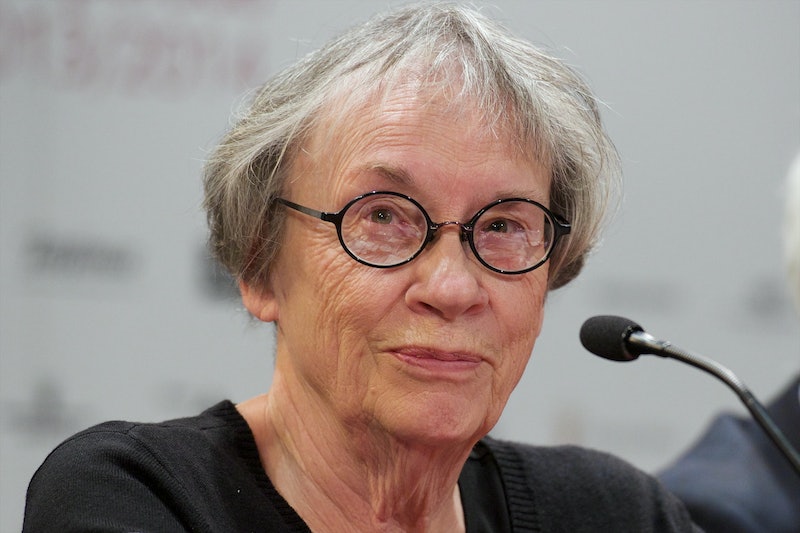 The National Book Foundation, presenter of the National Book Awards, has announced that it will award its 2017 Medal for Distinguished Contribution to American Letters to Annie Proulx, author of beloved short story Brokeback Mountain and the recent award nominee, Barkskins. Proulx is the 30th recipient of the award (which has previously been presented to the likes of Judy Blume, Joan Didion, Toni Morrison) and is being honored for her exceptional work and significant impact on American literature.

The prestigious award, which includes a $10,000 prize and a shiny brass medal to show off, will be presented to Proulx by Academy Award-winning actress and longtime advocate for women in the arts, Anne Hathaway, who also starred in the 2005 film adaptation of Proulx's Brokeback Mountain. It's an exciting addition to the many deserved accolades under Proulx's belt, proving her to be one of the most enduring American writers of our time.

“Annie Proulx’s work is widely loved and uniquely significant,” says David Steinberger, Chairman of the Board of Directors of the National Book Foundation, in a statement. “Proulx’s deep reverence for the beauty and complexities of rural America has introduced millions of readers to the wide breadth of American life. Her commitment to crafting compassionate, honest stories has left an indelible mark on literature and created a powerful and enduring legacy.”

Proulx’s deep reverence for the beauty and complexities of rural America has introduced millions of readers to the wide breadth of American life."

This won't be the first accolade Proulx has received; she has previously won the Pulitzer Prize in Fiction, the National Book Award, and a multitude of other awards including the PEN/Faulkner Award for Fiction, O. Henry Awards Prizes, and a Guggenheim Fellowship for Creative Arts.

“Annie Proulx’s ability to explore the nuances of the human spirit and render deeply moving reflections on rural life have solidified her place in American Letters,” says Lisa Lucas, Executive Director of the National Book Foundation, in a statement. “In addition to her astounding literary accomplishments, film adaptations of Proulx’s work have reached scores of viewers who may not have encountered her work on the page. We are honored to pay tribute to the extraordinary source material for these celebrated visual works, and, hopefully, to further grow the audience for Proulx’s exemplary literary work.”