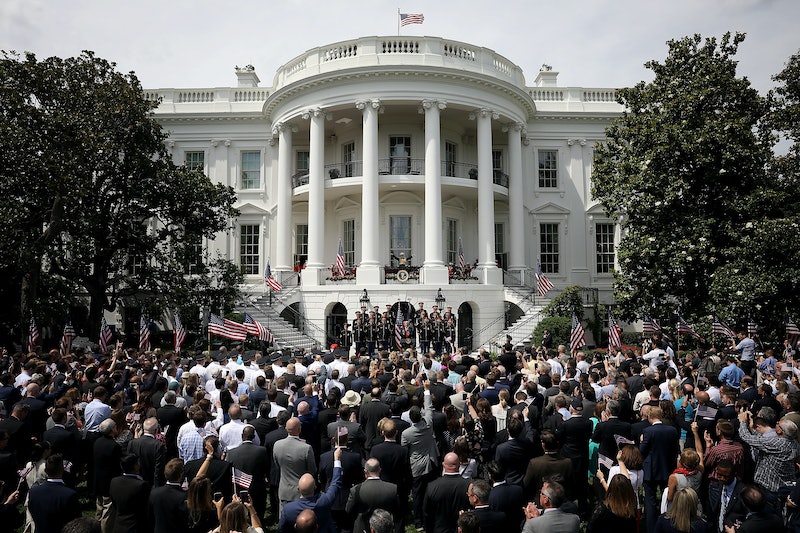 On Wednesday, the New York Times published an op-ed by an anonymous member of the Trump administration who claims to be working from within to "frustrate parts of [Trump's] agenda and his worst inclinations." Titled I Am Part of the Resistance Inside the Trump Administration, the op-ed immediately drew controversy on a number of fronts, and Twitter quickly went into a tizzy with theories, analyses and piping hot takes on the piece.

Trump dismissed the op-ed shortly after it was published, calling it "gutless" and presenting it as evidence that "we are doing a great job." According to NBC News reporter Peter Alexander, communications officials in the administration said they hadn't seen the article until Alexander handed it to them Wednesday afternoon.

"To be clear, ours is not the popular 'resistance' of the left," writes the author of the piece. "We want the administration to succeed and think that many of its policies have already made America safer and more prosperous. But we believe our first duty is to this country, and the president continues to act in a manner that is detrimental to the health of our republic."

The official goes on to say that "the root of the problem is the president’s amorality," and that Trump "is not moored to any discernible first principles that guide his decision making."

"That is why many Trump appointees have vowed to do what we can to preserve our democratic institutions while thwarting Mr. Trump’s more misguided impulses until he is out of office," the author writes.

Of course, the mere existence of the op-ed raises the tantalizing question of who wrote it. Although the answer to that question remains a mystery, there are some clues. First and foremost, the official Times Twitter account revealed — intentionally or not — that the author is a "he" — which ostensibly rules out Sanders, Homeland Security Secretary Kirstjen Nielsen, and the small handful of other women who serve senior roles in the administration.

It's also notable that the author is credited as a "senior official in the Trump administration;" this means that they are a member of the executive branch, not Congress, although whether they work in the White House proper or an executive branch agency is unclear.

The op-ed drew criticism from across the political spectrum. Some on the left condemned the Times for publishing it, with freelance journalist David Klion calling the newspaper "cowardly" and arguing that the op-ed serves no purpose other than setting up the author "for their inevitable Resistance hero golden parachute book contract." Trump supporters, on the other hand, angrily demanded that the president fire the official in question, although this would be impossible unless Trump knew who the official was.

Times reporter Jodi Kantor noted that the paper's decision to publish the op-ed put its own journalists in a uniquely awkward situation.

"So basically: Times reporters now must try to unearth the identity of an author that our colleagues in Opinion have sworn to protect with anonymity?," Kantor wrote on Twitter. "Or is the entire newspaper bound by the promise of anonymity? I don't think so, but this is fascinating. Not sure if there's precedent."

There was also widespread speculation as to who penned the piece. Many people suggested that White House Chief of Staff John Kelly was responsible, with one user drawing comparisons to the op-ed's linguistic structure and Kelly's past speeches. Others honed in on the author's use of the somewhat obscure term "lodestar," a word that Vice President Mike Pence has used on occasion — and which, incidentally, happens to be Pence's own Secret Service nickname.

Aside from Trump's own remarks, the White House hasn't yet issued any comment on the piece.