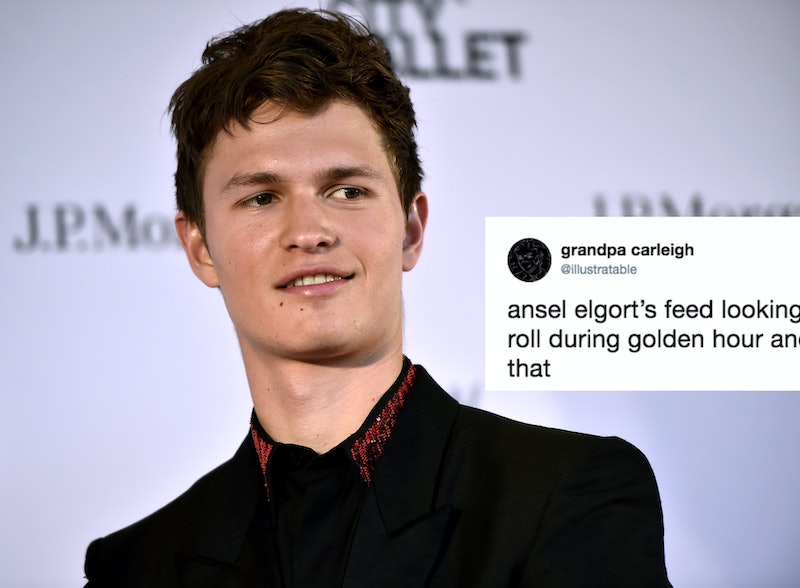 Everyone indulges in sharing the occasional selfie on social media from time to time — some more than others. Then there's Ansel Elgort, who posted 17 shirtless selfies in a row recently, which has caused the collective Twitter community to straight-up lose their minds.

Why did he do that, you wonder? Unclear. Not a single one of them has a caption. The mystery of it all has provoked a pretty wide range of reactions, though. There's a lot of thirst out there, which seems about right. There's some concern, too — hopefully unwarranted — because posting that many similar, consecutive selfies is definitely a little, um, unorthodox.

Now, perhaps we should consider another theory. Hear me out. You know how Elgort is set to star in the big-screen adaptation of Donna Tartt's Pulitzer Prize-winning novel, The Goldfinch? He plays the main character, Theo Decker, alongside Nicole Kidman, who plays his surrogate mother, Mrs. Barbour.

Anyway, it doesn't come out until later this year, but USA Today *just* released a bunch of "first look" stills from the film. Oh, and the trailer for The Goldfinch comes out on Wednesday, too. Having Elgort drop a ton of shirtless selfies at the same time would be a pretty bizarre publicity move to drum up chatter, but hey — you never know. Hollywood is wild.

Whether or not that theory is true remains to be seen. For now, though, we should focus on all the hilarious responses to Elgort's pics on Twitter.

Let's start with the thirst contingency, shall we? They're the group of people who could not care less what moved him to post all those pics in a row. All they care about is the quality of the content, and the quality is *chef's kiss*

"idfk what ansel elgort is doing but i’m here for it," one fan wrote. "Ansel Elgort let me talk to you," another fan wrote, accompanied by a photo of Lois Griffin from Family Guy slipping into something a little more comfortable. Then there's the person who tweeted, "This is my message to ansel elgort regarding his multiple insta posts," alongside a short video that is, in a word, amazing (see below).

Tons of fans on Twitter are just straight-up confused, though. Which isn't to say that they aren't secretly part of the thirst contingency as well, but their gut response was just like, "...?" Leading the pack is none other than Zoë Kravitz, who costarred with Elgort in the Divergent series.

"dude. what is happening right now ? lol," she wrote. Legit question. "Zoe Kravitz is all of us looking at Ansel Elgort's Insta," one person captioned a screenshot of Kravitz's comment. "Someone needs to unplug Ansel Elgort and plug him back in again," tweeted another perplexed follower.

There are plenty of other fans who are just getting a good laugh out of the whole thing — it's pretty funny, you have to admit — and some people who are comparing his posts to their own camera rolls.

"you're doing great, ansel honey," one follower tweeted while channeling Kris Jenner. "that ansel is so hot right now," joked someone else with a hilarious reference to Zoolander. "ansel elgort’s feed looking like my camera roll during golden hour and i respect him for that," shared another fan (same, by the way).

The bottom line here is that Elgort was clearly feeling himself. Can you blame him? That's a smoldering set of 17 pics. Whatever his reason for sharing them all with the world, fans should just be grateful that he did.