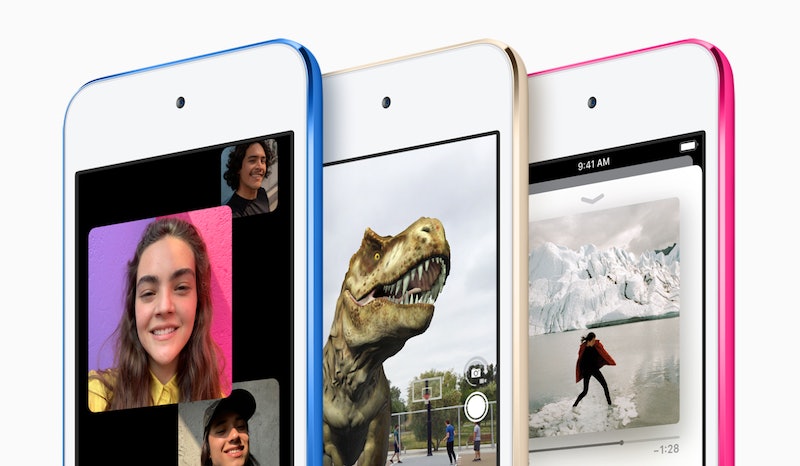 I remember a time when I didn't get the point of an iPhone. "Why have one device for your music and phone?" 17-year-old me would ask, clutching her Blackberry Touch (remember those?!). "If you lost it, you'd lose everything," I would say. That was my justification until I actually got one shortly afterwards and now, like many of us, I can't imagine going back to using two separate devices for my phone and music. So the news that Apple is releasing a new iPod Touch to the market in 2019 may come as a bit of a surprise to many.

The new iPod Touch, the first iPod released in four years by the tech giant, apparently has "enhancements to power, capability and communication." As well as playing music, it allows group FaceTime, and immersive augmented reality experiences. The new model is also available in 256GB capacity — more storage than it ever has had previously.

As previously mentioned, many may find this latest move by Apple a little, well, odd, after years of iPhones, Apple watches, increasingly nifty laptop models, but no iPods. And predictably, Twitter users had something to say, many making jokes about the retro feel to the new iPod Touch.

"Wow, stepped straight into 2009 as iPhone announce yet another* iPod Touch..." wrote @TheWriteGuyUK, while‏ @minilopmom said: "ipod touch and harambe are trending today WHAT YEAR IS IT."

Others just failed to see what the fuss is all about regarding a new iPod, something many of us associate with our teen years before iPhones were a thing.

Twitter user @vuIgaire, for example, wrote: "iPod touch is the most useless thing ever invented it’s literally an iPhone minus the phone like why."

Despite the slightly wry tones on social media, some users pointed out that the iPod Touch may have a rather good use we may not have thought of: for children. "The iPod touch is the savior device for a lot of parents who want to get their kids some sort of device, but aren't ready to go full smartphone," wrote @saschasegan.

@Zulimations also agreed that "the new ipod touch is a good idea for parents to not spoil their 5 year olds."

As someone who is not a parent, I guess I would never have thought of this, but they have a point. Aside from this though, can I really see Apple fans going mad for this latest release? I guess only time will tell.