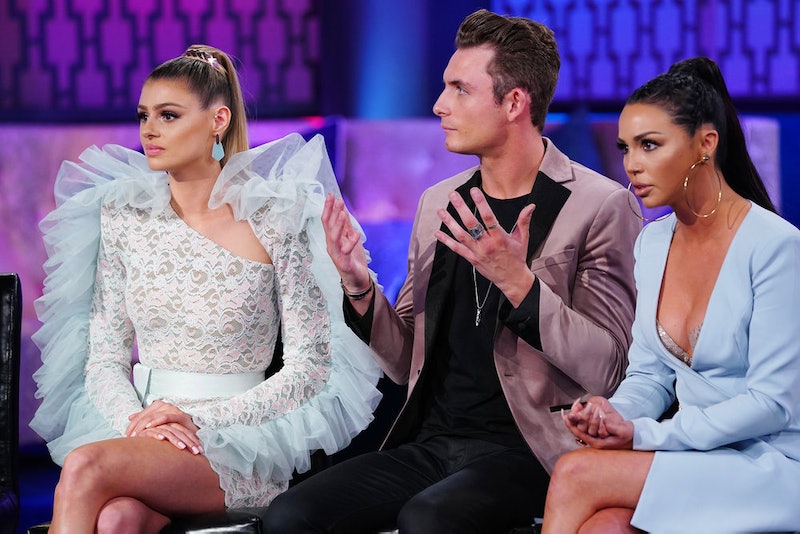 Scheana Shay has lived multiple lives on Vanderpump Rules — she started as the new girl who had slept with a married man. Then, she got married. Then, she got divorced. Then, she fell in love with a man who could hang a TV on a wall in under seven minutes, and then, that man dumped her. So Scheana is playing the field right now, and rightfully so — she wants to take a break and just have fun. But are Scheana and Adam still together on Vanderpump Rules? They may be "best friends," as Scheana keeps saying, but they're probably not any more than that.

Scheana and Adam have been hanging out and sleeping together for most of Season 7, but in recent episodes, Adam was mad that Scheana slept with another guy who had asked her out on a date. Adam told Scheana he wasn't in love with her and that he didn't want a relationship, and yet he was angry at her for being with someone else. Catching potential feelings is complicated! When asked by TooFab about her relationship status, Scheana said, "I don't know. It's complicated." Oh? Do tell, Scheana. "We try and go back to just being friends, but then we hook up again," she continued. "It's been this cycle for like 10 months now, and it needs to end or become something more." Agreed, Scheana. Agreed.

Scheana went on to say that she wasn't happy about their fight during the Vanderpump Rules finale, so much so that she can't even watch it. "You know the monkey emoji with the hands over its face? That's how I felt watching the finale," she said. "It was a really sad night. Like, him and I had a very tough conversation."

And while Scheana and Adam are doing... whatever it is they're doing, Scheana recently admitted that she and her ex, Rob, rekindled a little something after their October 2017 breakup. “We hadn’t spoken in almost a year. I ran into him at a football game," Scheana told Us Weekly. "We hung out a couple of times, and then he heard a rumor about me and instead of asking me if it was true, believed the person who told him. It was a completely convoluted, exaggerated story. And the fact that he just believed this person and cut me off so quickly after wanting to be back in my life, that’s just not someone I need around me.”

Yikes! So while Scheana is still confused about her ambivalent relationship with Adam, one thing she can talk about in confidence is the insanely dramatic nature of this season's Vanderpump Rules reunion specials. "There was some unexpected things that happened and some expected things that happened," she told TooFab, along with some "physical contact." Viewers will have to wait a little longer to see all of the reunion specials, but suffice it to say that for Scheana, she is staying out of the drama and just trying to figure out her love life. And that's not a bad place to be.

More like this
All The Clues About Gabby & Erich's Relationship After 'The Bachelorette' Finale
By Kadin Burnett
Kyle & Deepti Finally Revealed Their Relationship Status Post-'After The Altar'
By Grace Wehniainen
What’s New On Netflix: Meet 'The Real Bling Ring'
By Arya Roshanian
Jinkx Monsoon Is About To Get Real Sketchy
By Sam Ramsden
Get Even More From Bustle — Sign Up For The Newsletter