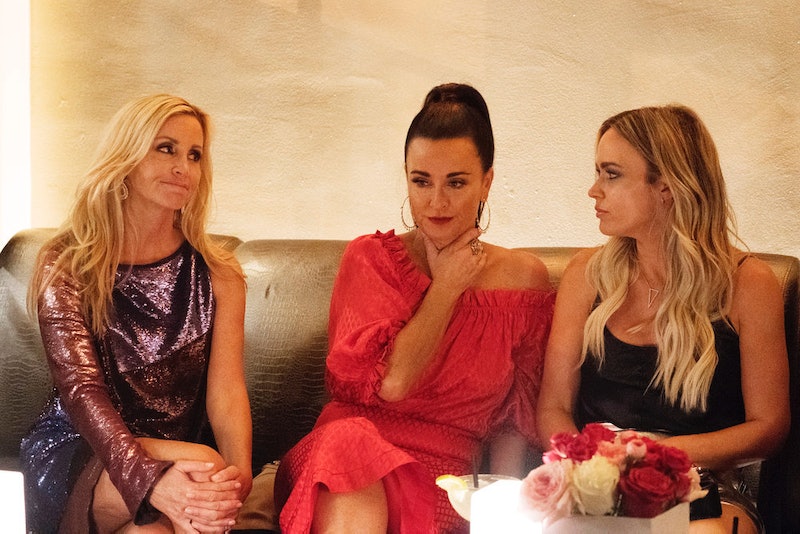 Fickle are the feelings of a Real Housewife. One minute, two women could be the best of friends — basically sisters — and the next, there's a chasm between them that even the most expert of relationship therapists can't fix. Camille Grammer Meyer and Kyle Richards started their time on Real Housewives Of Beverly Hills completely at odds, and then they put aside their differences and became pals. But with all the drama that's happened this season, are Camille and Kyle friends in 2019 on Real Housewives Of Beverly Hills? The cast isn't even sure who's going to show up to the reunion taping, as Kyle admitted to Bustle in a recent interview.

Who could forget the Real Housewives Of Beverly Hills Season 1 line heard 'round the world — "you're such a f*cking liar, Camille!" Once Kyle dropped that sentence, the Real Housewives Of Beverly Hills was on the map, regardless of whether or not its biggest stars were getting along. In 2018, Camille told People of her friendship with Kyle, “We had a rough start in our friendship, but we forgave each other. We said our peace years ago.”

Kyle was even a bridesmaid in Camille's huge Hawaiian wedding extravaganza in October 2018. “She saw me at my worst,” Camille said. “She watched me go through hell and come out the other side. And she’s been there for me through everything.”

Given that Camille and Kyle were tight, oh, only six months ago, one would assume that these women are still the best of friends. But this is RHOBH we're talking about here. In a very confusing turn of events, Camille recently claimed on Twitter that now that Kyle and Lisa Vanderpump are on the outs and #PuppyGate is so over, Camille is Kyle's newest target of abuse on Real Housewives Of Beverly Hills. Say what? Fans were confused about the claim, and Kyle was confused, too.

“I have no idea where that was coming from,” Kyle told Us Weekly. “It was completely uncalled for, and that’s the kind of stuff you’re going to be seeing. It’s like Season 1 Camille is back in full force.” Kyle also maintained her statement on Twitter, saying she didn't want to get into a "Twitter war" over nothing.

Camille backed up her assertions one more time in an interview with Entertainment Tonight, saying, "I haven’t filmed as much with the ladies, so they create this bond and I’m kind of odd man out so it’s easy to become the target… They have bonded. They’ve become very close." In a now-deleted tweet, per Reality Blurb, Camille said she wouldn't go to the reunion essentially because she wasn't going to get paid enough. Also because she's afraid of being ganged up on.

Confused? You should be, because none of this really makes sense. We haven't seen any of the behavior Camille is claiming in regards to being ganged up on... maybe it comes later on in the season? It's true that #PuppyGate should be dead and buried, but Camille doesn't seem the odd woman out. And let's be fair — Camille throws enough shade to keep me from getting sunburned at the beach for the rest of the summer. Though things were once easy and breezy with Kyle and Camille, their relationship has clearly taken a turn for the bad.