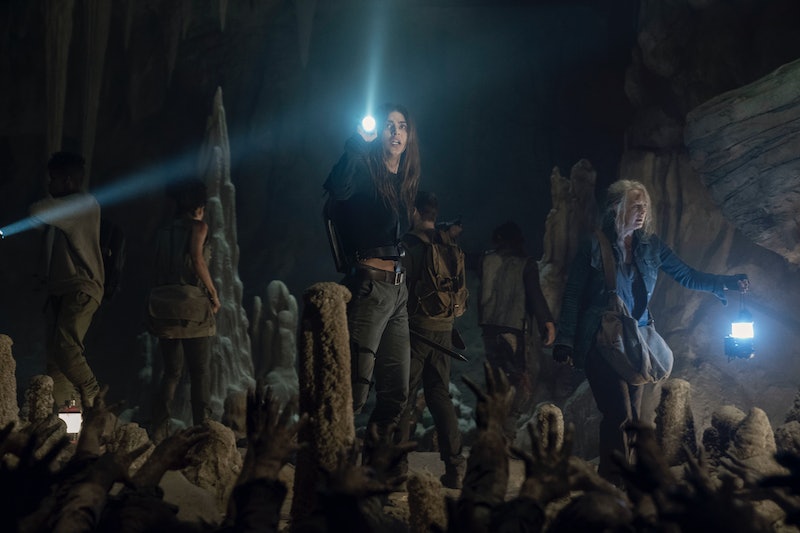 Spoilers ahead for The Walking Dead Season 10. Carol's death wish and need to kill Alpha might have just led to Magna and Connie's death on The Walking Dead. Their fates aren't 100% sealed, but it certainly doesn't look promising since the dynamite in the cave exploded while they were still in there. Even if they survived the blast and falling debris, Connie and Magna are still stuck in a cave filled with Alpha's zombie horde which is not exactly safe. It's all Carol's doing, and even Daryl, who has been on her side since forever, is ditching his close friend to focus all of his attention on trying to save them. Even if the quest might be futile.

Earlier in the episode, Daryl defended Carol when Magna confronted her being responsible for getting them stuck in Alpha's cave trap and although it was hard to not blame her, Connie stepped up and helped Carol with her panic attack due to her claustrophobia in the cave. Still, even this anxiety and reaming from Magna didn't stop her from fixating on Alpha, leading Daryl, Jerry, Kelly, Aaron, Connie, and Magna further into the hellscape. Everyone managed to get above ground just before the dynamite — except for Connie and Magna, who were still clawing their way out.

Carol felt terrible that Magna and Connie probably died because of her actions — particularly Connie since Daryl cares for her. This time around, Daryl didn't have any sympathy to spare for Carol. He left Carol crying as he went off alone to see if he can find another entrance to the cave to save Connie and Magna. Kelly was also devastated in that final scene.

While Yumiko wasn't part of the group, this news will rock her as well. Magna told Aaron that her relationship with Yumiko is tremendously strained at the moment, but still: they were close. It's possible that Yumiko will eventually join a rescue mission with Daryl and Kelly as well.

A rescue mission will be futile though if Connie and Magna have already died, as seems the most likely scenario. Yet, because The Walking Dead left it open-ended, there's a possibility that these women lived through the initial blast and will find their way out of the cave. They've spent years together fighting, so their shared experience will be vital to their survival — and with the greatest tracker of the zombie apocalypse searching for a way into the cave, Connie and Magna's time on The Walking Dead may not be over yet. But even if they make it out alive, Carol will have to live with what she has done.