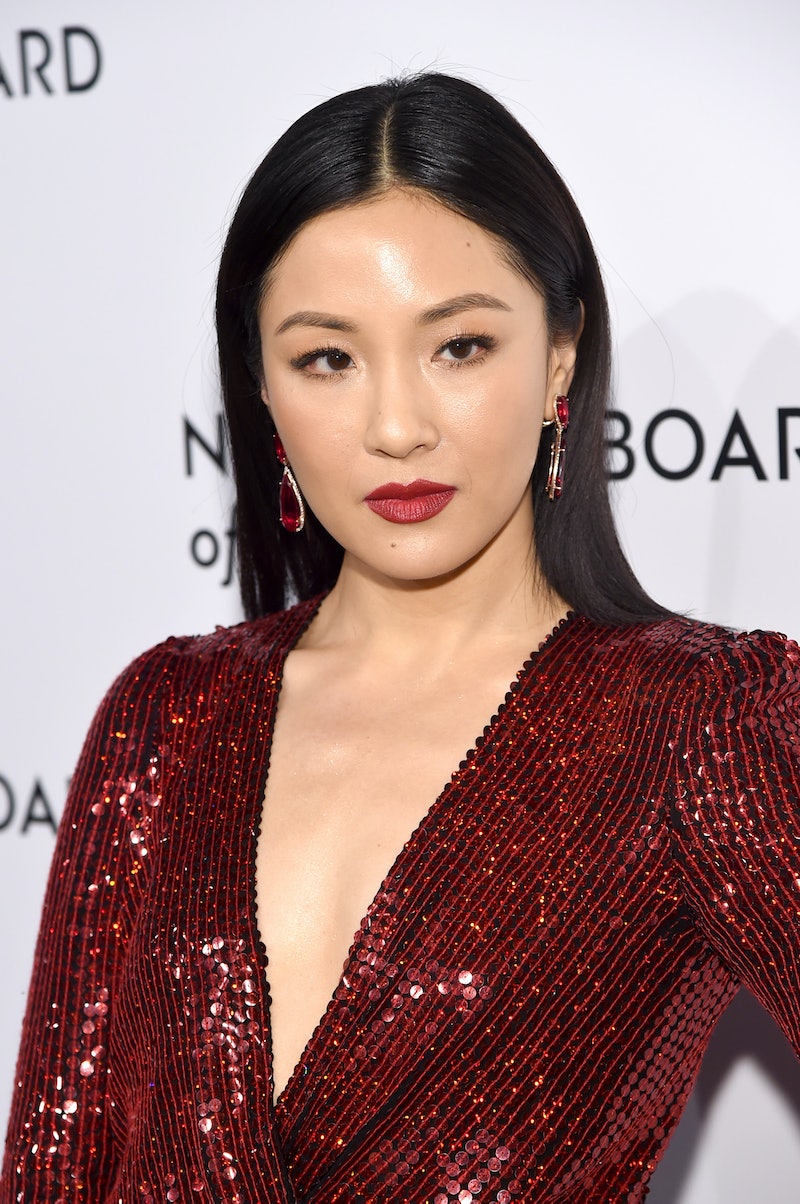 Ever since the glitz and glamour of Crazy Rich Asians made waves in movie theaters across the nation, no one's been able to keep their eyes off of Constance Wu. The new year, so far, has consisted of some drastic hair cuts for celebs — and even Constance Wu's new bangs prove she wasn't immune to the powers of clippers.

At this year's Critic's Choice Awards, the Fresh Off the Boat star made a huge hairstyle change and debuted some new messy baby bangs on the red carpet. Who knows what it is about bangs that make famous people look so demure, but if there's anything we know about them, it's that they always make you want to cut some of your own. Refrain from attempting it with your bathroom scissors, and just hire a professional, hun.

Wu was one of many stars that night who donned bangs, but her ensemble was one that could be best described as "fierce fairy". The actress kept her her hair down and out of the way while also wearing a blush pink Rodarte Spring 2019 gown that featured a helluva lot of sequins and beading details that probably costs more than your rent. Constance, though, looks so darling, she can wear my rent check any day of the week.

The actress wore her nails in their natural almond shape with millennial pink polish and matched the color of her dress with a Roger Vivier ‘Enveloppe Flap’ clutch and accessorized with diamond-studded jewelry from Lorraine Schwartz.

During the ceremony, the Crazy Rich Asians movie was up for 4 nominations, one of which was the winner for Best Comedy, while Wu was even nominated for Best Actress in a Comedy for the film as well.

Winning at comedy, it seems, is in Wu's DNA. While many know the star from her role as Rachel Chu in this blockbuster hit, others might be more familiar with her work as Jessica Huang of ABC's Fresh Off The Boat. If you haven't already binged every season on Hulu or your friend's cable subscription, you'd better get on that if you're in the mood to bust your gut.

Before she chopped up her baby bangs, Wu typically wore her shiny black locks hair down and straight or in short wavy curls.

According to the actresses Instagram, she tagged hairstylist Derek Yuen as the person responsible for the new 'do as well as past looks on the red carpets of this year's Golden Globes, the 2018 InStyle Awards, as well as American Music Awards.

While Yuen may have made this hair look effortless, he had a little bit of help with the right hair tools. The hairstylist posted to his Instagram all of the tools he'd used to attain Wu's angelic appearance, including the fan-favorite GHD Air hair dryer and the AQUIS Prime collection to build Wu's look.

Unfortunately, not everybody can be crazy rich to afford to look this luxe on the red carpet. But if someone does win the lottery in the near future, I'm a size 20 in thousand dollar sequin Rodarte gowns. Thanks.