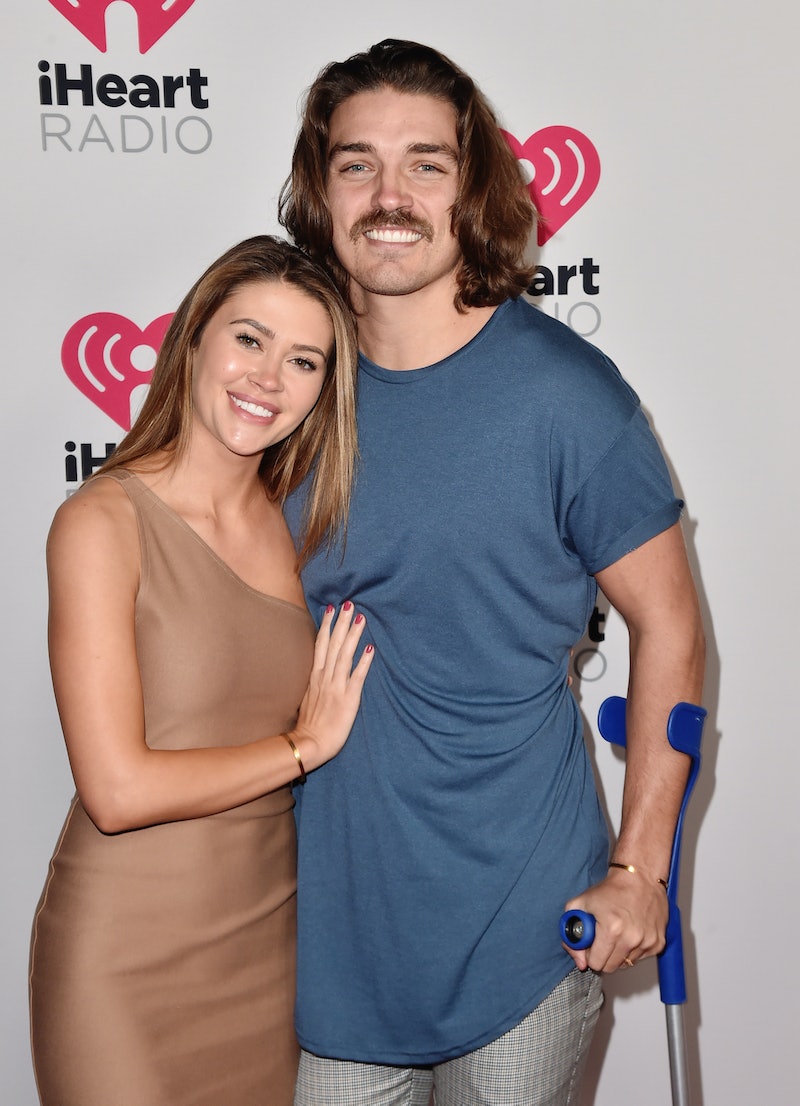 Dean Unglert and Caelynn Miller-Keyes may have had a rocky start on Bachelor in Paradise, but it seems the duo is doing better than ever. So much so that many fans are starting to wonder if Dean and Caelynn may have gotten married, thanks to some recent Instagram comments and a new ring that Dean has been rocking on a certain finger. Bustle has reached out to reps for both Dean and Caelynn for comment about the marriage rumors. Reps for Dean had no comment.

The speculation first started on Valentine's Day after Caelynn posted a sweet tribute to Dean on Instagram in honor of the romantic holiday. "Life is so much better with you in it. Happy Valentine's Day," Caelynn captioned the post of numerous photos of the two of them together at Yosemite National Park. The picturesque images prompted one follower to tell the duo to "get married," to which Caelynn replied that they "already did."

Initially, it came across as an innocent joke; however, Caelynn and Dean still seem to be having fun teasing fans about their marital status. And they've taken things so far that it does seem like there could very well be a grain of truth to all of this.

On Sunday, Feb. 16, Dean decided to upload a few Instagram photos of his own featuring him, Caelynn, and their new pup during a recent trip to Mirror Lake Loop Trail. He captioned the post with, "don't you know happiness isn't a place, it's a road you take." Caelynn then decided to comment on the post, writing that their latest adventure was the "best honeymoon ever."

But just in case that wasn't enough, Dean added further fuel to the speculation fire by posting an Instagram story of him shaving off his mustache (finally!) while wearing a suspicious piece of bling on his ringer finger, leaving many to wonder if it's actually his wedding ring.

But perhaps the most convincing piece of evidence came from Kumail Nanjiani. Yes, the star of The Lovebirds shared a clip on Instagram Tuesday, showing a promo he shot with his co-star Issa Rae and Bachelor alums Dean, Ashley Iaconetti, and Jared Haibon. In the clip, Jared accuses Dean of winking at his wife, saying, "You're a married man now." Some confusion follows, as Nanjiani tries to gather whether Dean really is married. "He keeps saying that they got married in Europe when he broke his leg," Ashley reveals, "And I'm thinking that possibly really did happen." Dean didn't confirm his marital status, but he did say, "I don't understand why being married to my wife is a controversial thing, but, it's more satire than anything." Satire or not, Dean very clearly says he is "married to my wife." So, is that a confirmation?

Neither Dean nor Caelynn have officially commented on the matter, which means it's quite possible they're simply having a bit of fun and just trying to mess with our minds. After all, up until this point, Dean has shown no interest in getting married anytime soon. In fact, when speaking to People back in December, Dean revealed that he and Caelynn wouldn't be tying the knot in the near future.

"There’s no, like, impending engagements or anything like that," Dean said at the time. "We understand that with the Bachelor franchise, you kind of get put in a pressure cooker with your relationship, and we’re just traveling together, exploring each other, and having fun and doing what we’re doing."

Could his outlook really have changed so fast? Love can make you do unpredictable things, so at this point anything is possible.

More like this
Where Is Former Bachelor Host Chris Harrison Now & What Is His Net Worth?
By Hugh McIntyre
Everything To Remember About Lace Morris Before 'Bachelor In Paradise' Season 8
By Grace Wehniainen
Tristan Thompson Proposed To Khloé Kardashian & She Said No
By Jake Viswanath
You Can “Fall In Love” At The Resort Where Bachelor In Paradise Season 8 Was Filmed
By Brad Witter
Get Even More From Bustle — Sign Up For The Newsletter